Ever since the Hubble Space Telescope reached orbit in 1990, I've secretly dreamed of hijacking the observatory's control center. In these fantasies, I gleefully joystick my way around the cosmos and target those awesome optics at anything I felt inclined to look at.

Well, understandably, NASA never lets me near the place. But for a limited time the space agency is giving you the chance to have a say in what HST observes. Read on! 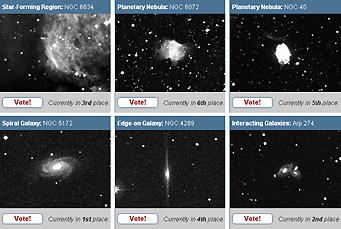 Based on your votes, one of these six cosmic targets will be imaged by the Hubble Space Telescope. Click on the image for a larger view.

Until March 1st, you can vote on one of six candidate deep-sky objects that Hubble will gaze upon for the first time in the coming weeks. NASA has dubbed this cosmic competition "Hubble's Next Discovery — You Decide," one of the agency's many contributions to the International Year of Astronomy.

After all the votes are tallied, the telescope will be slewed to capture the winning subject. You'll get to see the resulting views between April 2nd and 5th, during the IYA's "100 Hours of Astronomy."

Everyone who votes also has a chance to enter a drawing to receive one of 100 full-color, 16-by-inch Hubble photos of the winning astronomical object.

So what are you waiting for? Vote for your favorite!