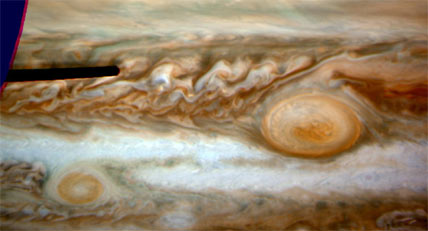 By combining red, green, and blue images taken at 0:41 UT April 25th, astronomers assembled this highly detailed view of the two red spots and their turbulent surroundings. The dark band protruding from upper left is the camera’s occulting finger. North is up.

The first group, led by Amy Simon-Miller (NASA/Goddard Space Flight Center), used the high-resolution channel of Hubble's Advanced Camera for Surveys (ACS) to capture Red Spot Jr. in near-ultraviolet to near-infrared light on April 8th. The second group, spearheaded jointly by Imke de Pater and Philip Marcus (both with the University of California, Berkeley), observed with the ACS's high-resolution and wide-field channels at visible and near-infrared wavelengths on April 16th, 24th, and 25th.

The Hubble images, nearly as detailed as those obtained during the Voyager flybys in 1979, show swirling cloud formations within and around the new spot, including the storm's light "collar," which is currently quite prominent in Red Spot Jr. but darker around the Great Red Spot.

Many compounds of sulfur, phosphorus, hydrogen, and carbon have been postulated over the years that would account for the Great Red Spot's coloration, but these are usually ruled out based on spectral observations — they are either the wrong color or are produced under the wrong conditions.

One of the most popular theories is that phosphine, PH3, a colorless, flammable, poisonous gas, is being dredged up by the storms from deep in the Jovian atmosphere to high altitudes where it is broken down by ultraviolet photons from the Sun. Subsequent chemical reactions eventually lead to the formation of red phosphorus, P4. "Unfortunately, P4 generally seems to be the wrong shade of red!" says Simon-Miller. 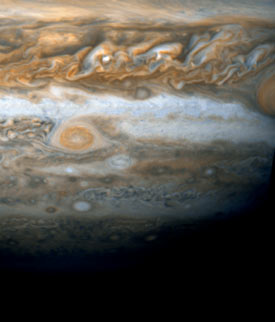 This close-up view of Jupiter's Red Spot Jr. (left of center), which is about the same size as Earth, was taken with Hubble's Advanced Camera for Surveys (ACS) on April 8th at 2:33 Universal Time through blue and red filters. Note the prominent light 'collar' around the spot. Part of the Great Red Spot can be seen at right. North is up.

Red Spot Jr. lies in the South Temperate Belt, following behind the Great Red Spot by approximately an hour of Jupiter's rotation. They should pass each other sometime this July. The upstart spot formed in 1998–2000, when three smaller white ovals — known as BC, DE, and FA — collided and merged to form Oval BA. A similar merger centuries ago may have given birth to the Great Red Spot, which is roughly twice as large as Red Spot Jr.

The Great Red Spot is arguably the most powerful storm in the solar system. Using data from the Galileo spacecraft in 1997, Simon-Miller clocked wind velocities of up to 650 kilometers per hour (400 mph) in the GRS, compared to a maximum of 430 km per hour for Oval BC (before the merger). "These are much higher winds than in a terrestrial hurricane or cyclone," notes Simon-Miller. "On Earth, these low-pressure systems rotate counterclockwise in the Northern Hemisphere and clockwise in the Southern Hemisphere. On Jupiter, these [spots] are high-pressure systems, or anticyclones, rotating the opposite way."

Scientists have no idea why there are no similar-size storms occurring on the planet's northern hemisphere. "We really don't understand everything there is to know about generating these kinds of storms," she adds.

The reddening of Red Spot Jr. could indicate that the storm is intensifying, though its diameter has so far remained largely unchanged. Measurements by Simon-Miller of her team's HST image give a long-axis dimension of 13,480 km for Oval BA and 20,740 km for the Great Red Spot. It's anyone's guess how long Red Spot Jr. will remain red and whether it will grow or shrink in the coming months. 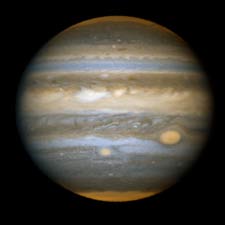 Hubble took this false-color portrait of Jupiter at 18:42 UT April 16th through near-infrared and blue/cyan filters. It shows Red Spot Jr. about to cross the central meridian; the Great Red Spot is to its upper right. The orange color traces high-altitude methane haze over the planet's Equatorial Zone, the two red spots, and the polar regions. North is up.

Joining de Pater and Marcus's team as co-investigator is Christopher Go, an accomplished amateur planetary imager from Cebu, Philippines, and a member of the Astronomical League of the Philippines. It was Go who discovered the color change last February 24th; he alerted observers and astrophotographers worldwide through the Association of Lunar and Planetary Observers' Jupiter Section. He has set up a special Web site for compiling ground-based images of Red Spot Jr.

"I'm quite excited working with Chris on this," says de Pater. "I'm really happy to have invited him. He's a tremendous help in the effort; pretty crucial, I'd say."

"It's all very exciting," exclaims Go. "Never in my wildest dreams did I imagine myself being part of an HST team!"

With good seeing, both the GRS and Red Spot Jr. should be visible in backyard telescopes 6 inches or larger under moderate to high magnifications. For a list of all times when the Great Red Spot crosses Jupiter's central meridian as seen from Earth, see our Red Spot calculator. Add an hour to get the approximate transit times of Red Spot Jr.

As Red Spot Jr. drifts slowly eastward and the Great Red Spot westward, the two are expected to pass each other in longitude around July 10th, according to Hans-Jörg Mettig of JUPOS, the Database for Object Positions on Jupiter. But since the spots do not move uniformly, the actual passage date could be off by a few days. 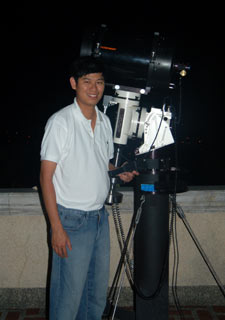 Philippine-based astrophotographer Christopher Go regularly images the planets from his balcony in Cebu. He currently uses a Celestron C11 Schmidt-Cassegrain telescope on an Astro-Physics AP900GTO mount and an Imaging Source DMK21BF04 monochrome Firewire CCD video camera. Go his success to the superb seeing at his site, about 575 km southeast of Manila.

"We don't know what will happen," says de Pater. "Will the small one be shred to pieces? Will it be gobbled up? It's probably still too far away from the GRS for that to happen. Or will [Oval BA] simply pass the GRS and continue its way?"

She adds, "The outer regions of the spots will interact, we think, but beyond that, it's hard to predict what might happen."

Check SkyandTelescope.com for the latest updates. And keep watch for yourself!