Hubble's Back — and Better Than Ever?

The Hubble Space Telescope's main camera is back online today, almost two weeks after a problem with its power supply forced it into safe mode.

Engineers at NASA's Goddard Space Flight Center switched the $86-million Advanced Camera for Surveys (ACS) to its backup electronics this morning, and expect that it will now function normally. They plan to spend the next week recalibrating its detectors to make sure, and will resume science observations on Sunday night, in between recalibration work.

Strangely, the power mishap might actually improve the quality of ACS observations, says Hubble senior scientist Dave Leckrone (NASA/Goddard). Mission managers have long wanted to lower the temperature of the camera's CCD detectors, but couldn't spare the time to recalibrate them. Now, since they must recalibrate anyway, they will be able to lower the temperature from –77°C to –81°C (–106°F to –114°F), which will reduce the background noise in ACS data by a factor of three.

"As a result of this unfortunate episode, ACS will actually produce more accurate quantitative data than it did before," says Leckrone. "So we're getting a little bonus." 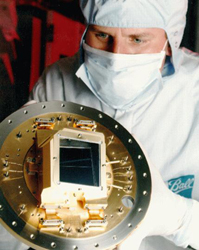 The 16.7-megapixel CCD detector for the ACS could be made even more powerful after Hubble engineers reduce its operating temperature. The camera's power failure on June 19th gave engineers just that opportunity.

ACS suspended operations at 1:15 P.M. Eastern Daylight Time on June 19th, when two of its three power converters exceeded their voltages. The two converters supplied power to the camera's 16.7-megapixel wide-channel CCD detector and the 1-megapixel high-resolution CCD detector. A third detector — the solar blind channel — uses a different power converter and so was unaffected.

ACS is one of four instruments on Hubble, but astronomers use it for the bulk of the space telescope's observations. Many projects were put on hold when the camera was down, including the Hubble Ultra Deep Field's search for the earliest galaxies in the universe. These galaxies, with redshifts beyond 6.5, have never been observed, but should be visible in high-resolution ACS infrared images. The team's project will likely be rescheduled for later this year, along with the other observations that were interrupted.

"In any given week, we might do one- to two-dozen science observations," says Leckrone. "These will be rescheduled. To the best of my knowledge, there were no observations lost that were irrecoverable." 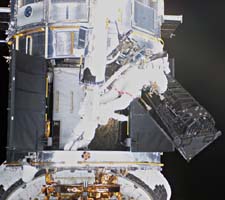 During the fourth space walk of shuttle mission STS 109 in March 2002, astronauts James Newman (foreground) and Michael Massimino remove the Faint Object Camera. They later replaced it with the much more powerful Advanced Camera for Surveys.

The ACS malfunction comes on top of Hubble's fading batteries and gyroscopes, but Hubble managers say these problems were anticipated and can be handled. Although four of the telescope's six gyroscopes are still working, the batteries are expected to run out by 2008 unless replaced by another Shuttle servicing mission.

Ed Ruitberg, deputy associate director of the Astrophysics Division at Goddard, emphasizes that the temporary camera failure is not due to aging. "We have experienced, over the life of mission, problems all along the way. We've always figured out a way to solve those problems. It's just a bump in the road."

ACS is now four years into its five-year life expectancy. Another Hubble camera, the Space Telescope Imaging Spectrograph (STIS), had a similar problem at its own four-year mark in 2001. Engineers switched to backup electronics, and continued to operate the camera for another three years — two years beyond the instrument's life expectancy.

Although engineers still do not know what caused the ACS power converters to overload, they speculate that anything from an energetic cosmic ray to a bad transistor might have been responsible. The engineering team continues to investigate the problem, and plans to release its report on July 24th.