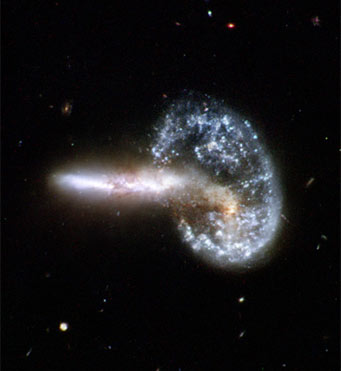 Arp 148, “Mayall”™s Object,” is about 500 million light-years away in Ursa Major. Hubble's sharp resolution reveals that an encounter between two galaxies resulted in a ring galaxy and a long-tailed companion. Gravitational modeling shows how the collision produced a shockwave effect that first drew matter into the center, then caused it to spread outwards in a ring. Infrared images reveal a highly obscured star-forming region behind the dark dust lane across the long galaxy's nucleus. The image is essentially true-color.

Ever since Halton Arp's Atlas of Pecular Galaxies (1966) and B. A. Vorontsov-Velaminov's Catalogue of Interacting Galaxies (1959 and 1976), astronomers and the public have been fascinated by these biggest cosmic smashups.

One reason is because there are a lot of them. Unlike most astronomical objects, galaxies are fairly large compared to the distances between them. So every now and then they run into each other — unlike stars or planets, which are very tiny compared to their separations.

Nowadays we know that galaxy collisions are more than just interesting flukes. They have been critical to the history of galaxy evolution and star formation throughout the universe. Big galaxies like the Milky Way got built up by collisions and mergers of little ones, which were the first to develop from the Big Bang. A collision disrupts and compresses the interstellar gas clouds in each galaxy involved, and this caused the huge bursts of star formation that lit the early universe. (Younger stars like our Sun are in the minority of latecomers.) The complete piecing together of cosmic-structure formation, from the Big Bang to now, has been one of the triumphs of modern cosmology — and it has put galaxy collisions front-and-center. 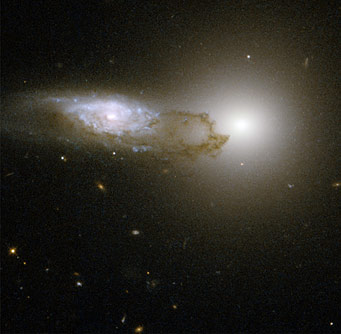 AM1316-241, 400 million light-years away in Hydra, consists of a spiral galaxy (left) in front of an elliptical. The background elliptical silhouettes dust lanes around spiral that might otherwise go unseen.

This morning the Hubble Heritage Project, the team in charge of compiling beautiful Hubble pictures for the public, released a collection of 59 greatest galaxy hits — literally. The images sample the huge range of forms that result from various types of galaxy interactions in the modern-day universe. Here's the team's press release, and here are the high-resolution images.

"Most of the 59 new Hubble images are part of a large investigation of luminous and ultraluminous infrared galaxies called the GOALS project (Great Observatories All-sky LIRG Survey)," says the group. The GOALS survey combines observations from Hubble (which sees visible and near-infrared light); the Spitzer Space Observatory (mid-and far-infrared), the Galaxy Explorer or GALEX (ultraviolet), and the Chandra X-Ray Observatory.

It's no coincidence that a survey of infrared-bright galaxies would pick up a lot of colliders. Collisions cause gas-cloud compression and bursts of star formation; the swarms of massive young stars blaze brilliantly and shed massive amounts of dust; the dust absorbs the brilliant light and re-emits it as infrared radiation; the infrared gets out through the dust for our instruments to see. 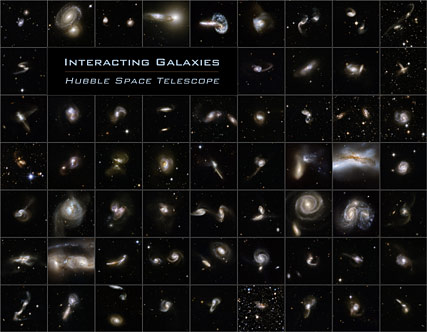 No two galaxy interactions are alike. Click image for the whole show.

For all the drama, however, creatures living on a planet in a colliding galaxy would experience few effects other than a very interesting night sky. The galaxies' individual stars are too far apart to collide (or even disrupt each others' planetary systems, by and large). And though a pass through a brilliant star-forming region might give your upper atmosphere some high-energy heebie-jeebies, such events can't be too bad, or we couldn't have evolved here on Earth. Our Milky Way contains many identifiable star streams that are the last traces of small galaxies that collided with and merged into ours in relatively recent cosmic times.

Beautiful photos, fascinating, REAL science, THIS is what Sky and Telescope does best! This is impact I can sink my teeth into!