In the final days of the IAU conference, Jay Pasachoff reports on talks about black holes and exoplanets, and a redefinition of the average distance between the Earth and the Sun.

The final days of the IAU brought both science and business to a close. The science talks covered some of the most popular topics in astronomy — black holes and exoplanets — and the final General Assembly passed resolutions that, among other things, redefined the average distance between the Earth and the Sun. 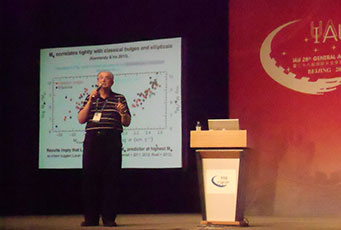 John Kormendy discussed the problem of how to grow supermassive black holes in a plenary talk at the IAU.

On Thursday morning, John Kormendy (University of Texas, Austin) discussed some of the current theories for how supermassive black holes at the centers of galaxies evolve. As early as 1 billion years after the Big Bang, these central black holes can have masses up to several billion times the mass of the Sun. Kormendy discussed evidence for and against the idea that central black holes may evolve in tandem with the galaxy, growing larger as the galaxy produces more stars. Some astronomers have suggested that black holes may grow as their host galaxies collide, an event that both spurs star formation and funnels gas into the black hole. But some evidence shows that not all black holes grow through galaxy collisions — spiral galaxies in particular may grow their black holes via different methods. Kormendy gave examples of some extreme galaxies that prove this point, where the supermassive black hole at the center is much bigger or smaller than what it should be, given the size of the galaxy. 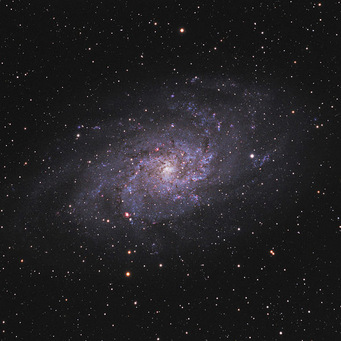 The Triangulum Galaxy is a spiral with no bulge of stars at its center — and no supermassive black hole. 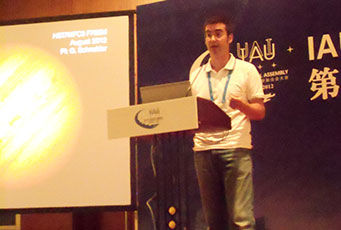 David Ehrenreich (University of Geneva) discusses techniques to observe exoplanets. Ehrenreich, Pasachoff, and their colleagues will try out one of these techniques with a Hubble Space Telescope September 20 series of observations of Jupiter, timed to coincide with a transit of Venus from Jupiter's perspective. A test image is on the screen.

David Ehrenreich (University of Geneva) presented results on Thursday afternoon in which I had a personal stake. The last part of his exoplanet talk focused on our upcoming Hubble Space Telescope observations of Jupiter. Hubble will snap pictures of Jupiter for 22 hours on September 20 as Venus transits the Sun from Jupiter’s perspective. The goal is to try to detect the effect of the transit by the light reflected off Jupiter, a measurement similar to that used to detect exoplanet atmospheres. (Ehrenreich and his colleagues made a similar attempt to see the effect of June 5-6th’s transit of Venus on the light reflected off the surface of the Moon. Unfortunately, the attempt failed because Hubble didn't track the Moon properly.) Glenn Schneider (Steward Observatory) and I are working with David and other collaborators on this difficult and exciting project.

Though the science talks were interesting, I also had to attend to business. In addition to a Business Meeting of the Commission on Education and Development, I've also been running in and out of Joint Discussion sessions on Communicating Astronomy to the Public and on Light Pollution. The Light Pollution discussion resulted from a forced marriage between the Education and Development Commission and a more technical commission, so the talks included information about both public outreach and technical lighting standards.

The Light Pollution group traveled to the Beijing Planetarium last night, a half-hour’s journey by bus, where we previewed a 6-minute planetarium public service announcement called Losing the Dark about light pollution that will be distributed free to planetariums worldwide, as well as a prize-winning documentary called The City Dark.

Even before the many individual science symposia came to a close, the full General Assembly met one final time on Thursday, both to attend to business and close the conference with a flashy closing ceremony.

The IAU national representatives vote on a new official definition of the astronomical unit.

First came the business: passing a number of resolutions to redefine standards used by the astronomical community. The resolution of most interest to me was the radical change in the definition of the astronomical unit, the average distance between the Earth and the Sun. Now to be abbreviated "au" in lower case, the new definition will rewrite astronomy textbooks — I’ve already sent my editor a revision for an appendix of my text The Cosmos, in press. In the past, the astronomical unit was defined relative to a strange number called the Gaussian gravitational constant symbolized by k. Now that we have accurate knowledge of the Earth’s orbit around the Sun, the IAU decided to define the average distance as exactly 149,597,870,700 meters. The resolution passed without objection.

Slightly more controversial was a major revision of the IAU’s structure. Most astronomers don't care very much about such details, however important, and I fear that it passed without much concern about the consequences. But none of the resolutions compared to the controversial discussions of 2006, when the IAU redefined the definition of a planet, excluding Pluto.

After the General Assembly ended, the Closing Ceremony began. We were treated to a set of dances, and the IAU flag was transferred from the outgoing president of the IAU, Bob Williams, to the incoming president, Norio Kaifu. The location of the next General Assembly was already known to be Honolulu, Hawaii, in August 2015; it was officially announced that three years after that the meeting will be in Vienna, Austria.

Though the closing ceremony had been completed, a final day of science talks remained. I enjoyed the "Hot Topics" session, where Karen Meech (University of Hawaii) spoke about the origin of water on Earth. Meech had carried out field work in Iceland, grinding up rock to search for water trapped in ancient minerals. She concluded — after considering possible contributions from meteors, asteroids, and comets — that an additional source for ancient water may have come from the Earth’s interior, so the percentage of relative contributions are unknown.

In the last two weeks blogging about the tremendous activity at the IAU, I've mentioned only a small handful of the hundreds of speakers, each of whom participated in a symposium with dozens of participants. With over 10 Special Sessions going on this week, no one person has time to attend them all. IAU summarizes the daily events in the conference's newspaper, Inquiries of Heaven — you’ll find my own report on the recent transit of Venus on page 6 of issue number 7. The busy blur of the past two weeks have been fulfilling for the almost 3000 astronomers who attended this year’s General Assembly.

First up, thanks for your coverage of the IAU's GA. I enjoyed reading both the summaries of sessions and also about your tour to Inner Mongolia.

And as regards Hubble not tracking the Moon properly, what happened? (It's the Hubble, after all!) While the event was highly publicised, I did not come across anything about its aftermath until I read this post (for obvious reasons, I suppose).

Jay, the astronomical unit is half the major axis of the Earth's orbit. This is not exactly the same as the average value of the Earth's if you take many points at equidistant
values of true anomaly it is. However the correct way is take equal times or equaly distant mean anomaly.