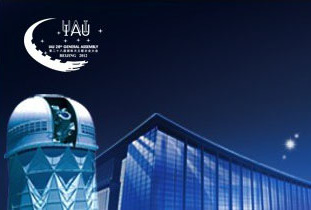 The International Astronomical Union will hold this year's General Assembly in Beijing, China.

I’m writing as my wife, Naomi, and I prepare to fly to China for the General Assembly of the International Astronomical Union. I’ve been attending IAU assemblies every third year since I was a graduate student back in 1964 with only one exception, but I’m still nervous about the condition of my poster. I've checked it in as baggage, but since I'm afraid the airline might lose it, I cut a second copy into four strips, rolled them up, and put them in my suitcase. In case all my luggage is lost, I've tried to arrange to have it printed there by a service offered by the IAU. I hope at least one of these methods work.

IAU General Assemblies are a mixture of science and business. There is a core meeting, which includes the business sessions, surrounded at the beginning and the end by science symposiums. They may not sound like it, but the business meetings can be the most interesting. Six years ago, I was at the famous General Assembly in Prague at which Pluto was reclassified as a dwarf planet — a promotion, I contend, to become the first and best in a brand new class of astronomical object. 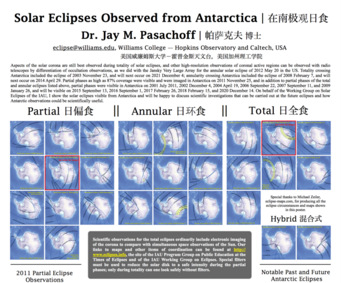 Jay Pasachoff's poster summarizes the solar eclipses viewed (or to be viewed) from Antarctica. Pasachoff will present the poster at IAU's General Assembly in Beijing, China.

My poster highlights solar science being done from the South Pole, especially the solar eclipses observed and to be observed from Antarctica, as part of the Astrophysics from Antarctica symposium. But that’s not all that’ll be happening over the next two weeks. Several thousand astronomers will be attending this conference, out of nearly 10,000 IAU members worldwide, and there will be something here for everyone.

Beijing can be a bewildering city, but fortunately we’ll have some friends to greet us there. Several Williams College alumni live in Beijing; some of them are running the Western Academy of Beijing. They’ve arranged to meet us at the airport and to come with us for a little touring on Sunday, the day before the meeting begins. Monday morning, Naomi and I move into the hotel attached to the Conference Center, which is near the 2008 Olympic venues, and we'll see if the heat and smog are sufficiently low that it will be worthwhile to go outdoors.

There will be lots of interesting science going on over the next two weeks. And I’ll be posting about it regularly from Beijing!

Jay M. Pasachoff is Field Memorial Professor of Astronomy at Williams College and is on sabbatical at Caltech. He chairs the IAU's Working Group on Solar Eclipses and is a veteran of 55 solar eclipses.