NASA's Interstellar Boundary Explorer has discovered that the Sun has no bow shock, overturning decades of scientific research.

Scientists used to think that the Sun flies through space like a supersonic jet, which creates a pileup air in front of it called a bow shock. The result is a sonic boom heard on the ground below as the jet passes overhead. 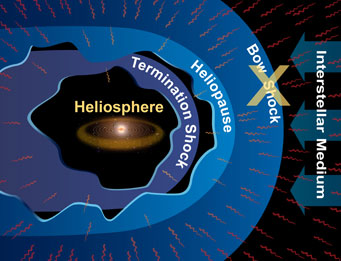 The heliosphere is a magnetic bubble that protects the solar system from interstellar space as the Sun plows its way through the galaxy. For decades, scientists believed that the bubble was moving quickly enough to form a bow shock, but that view has been revised in light of new data from the Interstellar Boundary Explorer (IBEX).

The Sun was thought to form a similar bow shock where the heliosphere, the vast magnetic bubble surrounding our planetary system, plows through the interstellar medium, the thin gas that floats between the stars. But a new study published online by Science this week turns that image on its head: now the Sun is looking less like a fighter jet and more like a tugboat.

Since its launch in 2008, the Interstellar Boundary Explorer (IBEX) has measured energetic neutral atoms (ENAs) from its orbit around Earth. These high-speed neutral atoms are created when charged particles in the solar wind interact with atoms coming from beyond the solar system. ENAs provide a unique way of imaging the shape of the magnetic bubble that surrounds the solar system.

So how does IBEX manage to see the edge of an invisible bubble that’s billions of miles away? Neutral atoms can freely cross magnetic field lines, penetrating the Sun's magnetic bubble from interstellar space. Once these ENAs reach Earth, IBEX records them and the directions they came from.

IBEX’s novel imaging technique has unleashed one surprise after another. Now principal investigator David McComas (Southwest Research Institute) and 10 colleagues have turned IBEX's attention to the Sun's motion through space. It turns out that the Sun is moving through interstellar gas at 52,000 miles (84,000 km) per hour, about 12% slower than previously measured by the Ulysses spacecraft.

So what does the new model look like? IBEX's observations confirm that the Sun is still moving (albeit slowly) through the Local Interstellar Cloud, a fluff of higher density gas roughly 30 light-years across. Combined with a relatively strong interstellar magnetic field, the Sun's slower advance is no longer enough to push interstellar gas into a bow shock. At best, it makes a "bow wave," a region of slightly increased density — more like a fast-moving boat than a fighter jet. This means a significant change in how scientists think about the Sun and its interaction with the stuff beyond its influence.

"It's too early to say exactly what this new data means for our heliosphere. Decades of research have explored scenarios that included a bow shock. That research now has to be redone using the latest data," says McComas.

Voyager 1 and 2 have crossed the heliosphere’s termination shock, where the solar wind slows down abruptly as it approaches the threshold to interstellar space; however, neither craft has made it as far as the heliopause, the point where the pressure of the solar wind matches that of the interstellar medium. And it’ll be a very long time until either would cross a hypothetical bow shock.

The variable star Mira plows through interstellar gas at 130 km/s (almost 300,000 mph), carving out a bow shock in front, and leaving a comet-like trail 13 light-years long.

Bow shocks do form around other stars. One well-known example is the variable star Mira. Ultraviolet images from the Galaxy Evolution Explorer (GALEX) show that this star plows through the interstellar medium at 130 km/s (almost 300,000 mph) and leaves a trail of ionized gas 13 light-years long.

"Observations of a few astrospheres have shown bow shocks around those stars, but IBEX has shown that our star has a fundamentally different environment surrounding it," says Christina Prested (Boston University), an IBEX scientist not involved in the published study. "These results are very exciting as we can now definitively say what it's like in the neighborhood of our solar system."

The Mayan calendar does not predict the end of the world, but is based on extensive knowledge of the cycles of the night sky. Did they have knowledge of the variation of density in inter stellar gas clouds too? Does this correlate with a cycle ending in 2012? Does this flux in solar activity affect the electro magnetic fields of life on this planet? Is the increased density a result of "dark matter?" Is dark matter related to changes in energy levels? Lots to think about.