In the Fires' Wake 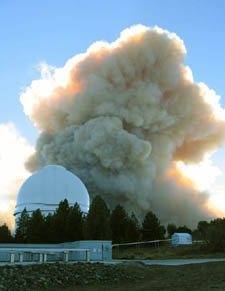 Not as bad as it looks! Smoke from the devastating Poomacha wildfire towers above the 200-inch telescope's dome on Palomar Mountain and (foreground) the Palomar Testbed Interferometer. Click on the image for an enlarged view

Last week, as devastating wildfires engulfed many locales in Southern California, we scrambled to find out how astronomical facilities in the area were affected.

First on our list was Palomar Observatory, which is about 40 miles north of San Diego. The Poomacha Fire, which began on October 23rd and scorched more than 50,000 acres and 140 homes, came within two miles or so of the summit before being tamed.

"One observatory employee lost his home due to fire in the valley below Palomar," reports Scott Kardel, the observatory's public-affairs coordinator. Residents of the mountain (including Kardel's family) had been evacuated early on the 23rd.

According to Caltech spokesperson Jill Perry, the historic 200-inch Hale Telescope and other instruments there were unharmed. In fact, Perry says, "Firefighters utilized the entire observatory as a rest area and staging area for attacking the fire." The observatory provided water from its own 1-million-gallon water tank for fire units operating in the nearby community, she told Sky & Telescope, and an on-site generator gave firefighters access to the water even though power was out on the rest of the mountain. 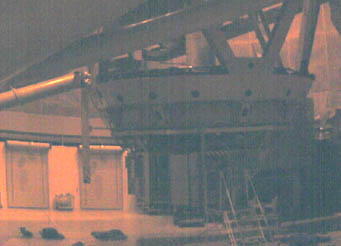 Firefighters (at lower left) catch some sleep next to the Cassegrain cage of the 200-inch Hale Telescope on Palomar Mountain. The scene was captured by one of the observatory's security cameras. Click on the image for a larger view.

Some exhausted firefighters even used the observing floor of the famed 200-inch telescope to grab a few hours of much-needed sleep!

The road to the summit has since reopened, and the observatory is again welcoming the public for visits. However, ash in the general vicinity will likely keep the domes closed for another week or two.

Meanwhile, dark-sky sites for the Orange County Astronomers — one of the largest amateur clubs anywhere (800 members) — also escaped damage. According to OCA trustee Steve Short, the only real consequence is that this weekend's star party at the Black Star Canyon area had to be canceled. The club's observatory near the town of Anza, 13 miles northeast of Palomar Mountain, escaped unscathed.