Parking in lunar orbit is about to get a little more crowded. 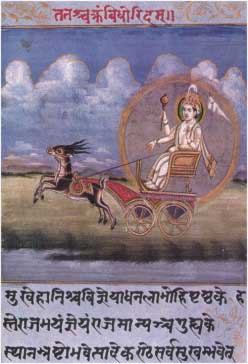 On Wednesday the Indian Space Research Organization (ISRO) launched Chandrayaan 1, its first deep-space mission, from the Satish Dhawan Space Center in Sriharikota. In Hindi, Chandrayaan means "Journey to the Moon" (Chandra is Moon, and yaan is ship).

The space agency's proven Polar Satellite Launch Vehicle initially placed the spacecraft in a looping orbit that carried it 14,100 miles (22,860 km) from Earth. But a rocket firing yesterday nearly doubled the orbit's apogee, or high point. More maneuvers in the coming days will deliver Chandrayaan 1 to the Moon, where it should eventually settle into a low polar orbit only 60 miles (100 km) high.

Indian space scientists have high hopes for this mission. The spacecraft carries 11 instruments (three supplied by members of the European Space Agency and two by the United States). Most are designed to map the lunar terrain at high resolution and to assess surface composition at visible, near-infrared, microwave and X-ray wavelengths. ISRO has a nice online summary of the experiments and their objectives.

One novel twist is a 65-pound (29-kg) probe that will record video and analyze the Moon's extremely tenuous atmosphere for 20 minutes before it slams into the lunar dust. The impact won't be visible from Earth, but it'll certainly provide a challenging engineering test for the mission team. 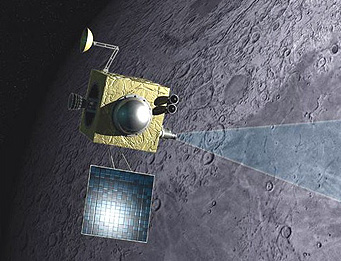 Chandrayaan 1 joins a recent rush of exploratory missions to our neighbor world. Last week Japanese scientists showed off the latest results from their highly capable Kaguya spacecraft at a meeting of planetary specialists. (Check out the high-def video of a "full Earth" rising over the lunar landscape.) Team member Sho Sasaki told me that Kaguya has ample fuel reserves, enough to lower the orbital altitude from 60 to 30 miles and extend the mission through at least February.

Far more enigmatic is the Chinese orbiter Chang'e 1. A lot of hoopla accompanied its launch about this time last year. But few details have emerged since then. A small contingent of Chinese scientists had planned to describe early results from Chang'e 1 at a scientific meeting last March, but they were no-shows.

Finally, NASA plans to resume its exploration of the Moon next April, with the launch of the double-barrel LRO/LCROSS mission. Mapping and surveying by the Lunar Reconnaissance Orbiter should help pave the way for future astronaut sorties, while the piggybacking Lunar Crater Observation and Sensing Satellite (LCROSS) should strike the Moon with enough oomph to briefly loft a debris plume high enough to be observable from Earth.

Congratulations India, this is terrific.
I find it nice also to see other nations achieve such scentific achievments, showing America that it no longer has the monopoly on such things.

I agree with Isabelle, friendly scientific competition benefits us all.

It is remarkable what a dedicated band of Engineers led by visionary leaders can achieve against all odds. Working on shoestring budgets, getting pittance for salary ( as against the IT crowd - it is a crying shame that even the Director in ISRO gets about 25% of what a 5 year experienced IT guy gets!!)and hemmed in by sanctions by western nations for a long time, these engineers continue to astound the country and the world by following one feat after another. Only a few months back they launched 10 satellites in one launch. Bravo, ISRO team!

We can land two delicate rovers and a lander on a planet millions of miles away, an astounding technical feat, and here we are back to crashing things into the moon...

Congrats to the ISRO, by the way.

We must keep in mind that virtually all the "space" technology being used by India and China was invented by NASA and made public to the world.

A minor correction here. Some sentiments are hurt here by the above comment by Mr.Charlie Miller. He should by now atleast realize that the "Invented by NASA" does not hold, as the rockets they used are very well known the world over that the Technology was by Dr.Wernher Von Braun, incidentally, a German. NASA even Sidelined the great guy, everyone knows. INDIA has taken Great pains to come to world class levels "on its own", unlike NASA. No personal grudge here,

People like Mr.Charlie would be Wise to Not make such statements in the Future.
Sincerely,
Sathya