Astronomers have approved official names for the newest and smallest of Pluto's five moons, discovered in Hubble images taken in 2011 and 2012. They'll be seen much better when the New Horizons spacecraft goes by in two years.

Astronomers have a long, colorful, and occasionally contentious history of naming objects in the solar system, as demonstrated by this 1930 communication concerning a newfound object beyond Neptune. But they don't have a monopoly on picking suitable monikers. So it's refreshing that the discovery team for the newest and smallest pair of Pluto's five moons have opted for names chosen by popular demand.

With the New Horizons spacecraft already en route to Pluto, discoverer Mark Showalter (SETI Institute) and his observing team decided to give the public a say in what the final names would be. So a website offered a chance to vote on 21 candidate names drawn from mythic underworld realms. 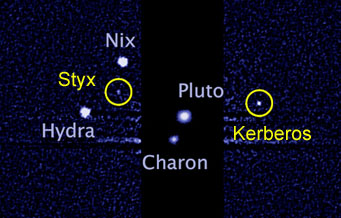 Three sets of 3-minute-long exposures, taken on July 7, 2012, with Hubble's Wide Field Camera 3, reveal Pluto and and its five moons.

The votes are in — nearly a half million of them, including some 30,000 write-ins — and the winners are Kerberos (for P4) and Styx (for P5). In Greek mythology, Styx is the river (and the goddess thereof) that separates Earth from the underworld. Kerberos is the three-headed guard dog who prevents the dead from escaping the underworld. The IAU picked this spelling over the variant Cerberus, which is already used for an asteroid.

Actually, the top vote-getter was Vulcan. After all, that's the Roman god of volcanoes (a little-known fact), and Vulcan was the home planet of Mr. Spock in Star Trek (a better-known fact). But it's also been used for many decades in astronomical mythology, for a planet purported to circle the Sun well inside Mercury's orbit.

Showalter tells me he tried "pretty hard" to convince the IAU to accept Vulcan, the people's choice. "There are scattered episodes in the literature where the connection can be made, such as Hades' frequent use of volcanoes as his exit point from the underworld," he says. His proposal also noted that a planet interior to Mercury doesn't actually exist, so Vulcan ought to be valid for naming something else.

But Showalter anticipated the IAU's decision (technically made jointly by its Working Groups for Planetary System Nomenclature and Small Body Nomenclature) and fully supports it.

For those of you keeping score, the discovery of Kerberos and Styx brings the grand total of known planetary satellites to 180 (including those around dwarf planets).

Frankly, the New Horizons team was less concerned about what the two moonlets are called and more about the fact that they exist at all. As I detailed last year, these little bodies have very little gravity. So when something hits them, or Nix or Hydra, the resulting debris gets scattered widely in Pluto's vicinity, creating temporary rings. These would be too faint to detect, but they could pose a serious threat to the approaching spacecraft. 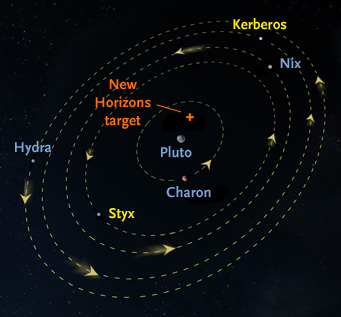 As the diagram here shows, New Horizons had been targeted to fly through the system well inside Charon's orbit. But would that route be safe? Maybe not! So last year principal investigator Alan Stern (Southwest Research Institute) led an intense effort to quantify the risk of collision and to develop several alternate routings — dubbed Safe Havens By Other Trajectory (SHBOTs).

It turns out that Pluto's largest satellite has the spacecraft's back. Charon is massive enough that its gravity will perturb the orbits of any dust particles in its vicinity and quickly sweep the area clear. Computer models show that the chance of mission-ending collisional damage is just 0.3%, so recently the team decided to stick with Plan A. Stern discusses the potentially dangerous moon dust and the SHBOT effort in this blog.

So for now it's full speed ahead for the spacecraft. Hard to believe, but only two years from now — on July 14, 2015 — New Horizons will zip just 7,800 miles (12,500 km) from Pluto. In fact, even though it's still a half-billion miles from Pluto, the spacecraft captured Pluto and Charon nestled closely together in snapshots taken July 1st and 3rd. (Charon just celebrated an anniversary of sorts: it was discovered 35 years ago, in June 1978.)

It's conceivable that other moonlets will be found around Pluto between now and then, so those SHBOTs might still come in handy. In any case, New Horizon's upcoming flyby is sure to rekindle the debate about this little world's status as a "dwarf planet".

Creative naming has long been associated with Pluto. Here's the last part of a Lowell Observatory Circular proposing that name for the distant object discovered by Clyde Tombaugh.

Five moons, yet it's only a dwarf planet.
The IAU is a bunch of petty, jealous, anti-Americans that can't stand that an American found Pluto!

Of course, if you add in the dwarf planets' moons, you get:

Well, clearly the number of “moons” in this solar system has gotten way out of control. But first, consider the generations long international hysteria caused by the controversies over the number of planets! Since the addition of numbers over 10 is hard, it has been decreed that Pluto and all like sized sun orbiters shall be permanently consigned to dwarfdom. But wait! The number of moons is an EXPONENTIALLY LARGER problem! Therefore in the spirit of the IAU’s Dwarf Planet definition I humbly submit that a definition should be contrived limiting the number of real moons in this and all other star systems to a number never to exceed 100. Smaller, non-real moons should be referred to in the literature as “Dwarf Moon” in preference to the less scientifically definable term “moonlet”. So Kerberos and Styx should have the great honor of being the first of a new class of celestial object; Dwarf Moons.

Adding to the conundrum of how to classify these marvelous objects, certainly so because of the controversy they garner, we give ourselves the honor of determining whether to call these planet, moon, moonlet, or the sometimes favored dwarf planet, dwarf moon, or by extension planetlet 😉 Clearly our brains have gotten too big for our own good and should look again into the heavens and be humbled by the Creator who put these all in motion.

@Robert: considering that 25% of the IAU members are US citizens, followed by France with only 7% and Japan with 6% (see http://www.iau.org/administration/membership/individual/distribution/), it's not very likely that it is a "bunch of Anti-Americans". In fact, there have been good reasons to sort out Pluto, Eris and Ceres from the planets (these bodies never finished planet formation by accreting all available material in their orbits and they are members of a much larger group of bodies). Honestly, I don't understand why this discussion always has to come up when an S&T article deals with Pluto. Why is it so ultimately important that Pluto is a planet - while nobody seems to give a fuss about Eris, also discovered by Americans? Would it matter if a medium sized topographical elevation was called a hill or a mountain, and if so, for what reason? After all, IAU categories ought to be all about science, not national or personal pride issues. The new definition of "dwarf planets" already went too far to preserve faces of some proponents, IMO. We had asteroids, KBOs and planetesimals beforehand. That would have sufficed to classify Ceres, Eris and Pluto with properly defined category boundaries among these.

Those are very reasonable, well informed points Dieter. Part of the reason the debate about Pluto’s planetary status always comes up is that it is so loaded with humorous potential. Was Robert being serious in his rant against the IAU? I found his comment to be funny since it has been so long since Pluto’s discovery. Perhaps Robert will be so kind as to inform us as to whether he was being serious or not. My comment was certainly NOT meant to be taken seriously. My intentions were purely humorous, and I hoped that most readers would be amused. I also hope that I didn’t actually offend any IAU members, who as professional astronomers are among the world’s best mathematicians. The entire comment was made simply in jest. And upon reflecting on Kaley’s fine comment I can see that I was having too much fun. Indeed, credit should go to the One with the ultimate naming rights, of whom Isaiah 40:20 says in part, “Raise your eyes high up and see, Who has created these things? It is the One who is bringing forth the army of them even by number, all of whom he calls even by name.”

The comment in the article that "Vulcan was the home planet of Mr. Spock in Star Trek (a better-known fact)" forced a wry smile, since the planet Vulcan and its most famous inhabitant, Spock, are both fictional.

I still prefer my choices for names: tick and flea.

I would like to know speed and trajectory compared with Voyagers, after Pluto flyby.

Athos... right now New Horizons is moving at 14.94 km/s away from the Sun. Voyager 1's heliocentric velocity is 17.14 km/s -- that's higher than NH even though it was launched slower, but it picked up speed after passing Jupiter and Saturn.

Everybody critizing the IAU for kicking Pluto off the list of planets should have a look at this article: http://www.mikebrownsplanets.com/2011/08/free-dwarf-planets.html
And yes, indeed, the IAU definition needs rework to include new dwarf planets and exoplanets. But Pluto shall not be considered a planet again, ever.

Glowing Serpent Found in the Sky 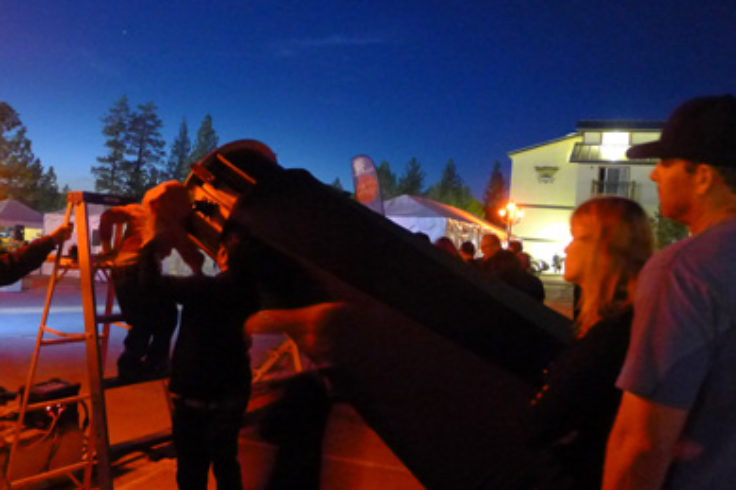 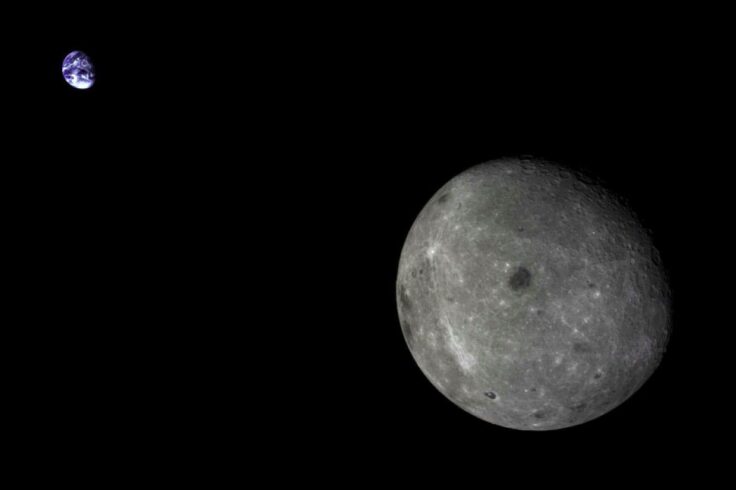