Recent observations show that the asteroidal object 3200 Phaethon, the source of the Geminid meteor shower, creates a stubby dust tail each time it skirts searingly close to the Sun.

It's been almost exactly 30 years since the discovery of an oddball object named 3200 Phaethon. Mere days after NASA's Infrared Astronomical Satellite spotted it in October 1983, the late, great astronomer Fred Whipple realized that the orbit of this new object (then designated 1983 TB) matched the paths of Geminid meteors around the Sun. At last, astronomers had found the source of this robust annual shower. 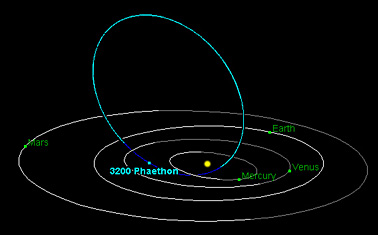 Locations of 3200 Phaethon and the inner planets on September 22, 2013. Dark blue indicates where the asteroid passes below the ecliptic plane.

Since most (all?) meteor showers are spawned by comets, it seemed logical that Phaethon must be one too. But observers scrutinized it for decades without detecting any cometary activity. Moreover, Phaethon's orbit is decidedly asteroidal — averaging 1.27 astronomical units from the Sun with a period of just 1.4 years. Perihelion occurs just 0.14 AU from the Sun — about 15 solar diameters — too close to observe the object with ground-based telescopes.

A breakthrough came in June 2009, when David Jewitt and Jing Li (University of California, Los Angeles) used NASA's STEREO A spacecraft to image Phaethon just as it passed through perihelion. They found an unexpected doubling in the object's brightness, presumably due to the sudden escape of particles from the nucleus to form a cloudlike coma. They reasoned that this couldn't be due to deep-seated water vapor gushing from the 3-mile-wide nucleus, nor the aftermath of an impact.

Instead, the two researchers speculated that the outburst most likely resulted from the sudden cracking or breakdown of clay minerals into dust as the searing sunlight heated its surface to roughly 1,300°F (700°C). The Sun's radiation pressure then drives them off into space. 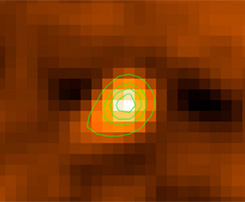 This closeup of an image of 3200 Phaethon by the STEREO A spacecraft shows a tail extending faintly toward lower left.

So is Phaethon really a "rock comet"? Apparently. Li and Jewitt have enlisted the help of STEREO A again to observe Phaethon two more times when it skirted the Sun. By carefully processing those images, plus revisiting their initial observations, they've detected a stubby dust tail that pointed directly away from the Sun just after perihelion in 2009 and 2012 (but not in 2010).

The tail grew rapidly, reaching its full length — 150,000 miles (250,000 km) — in a single day. This implies that the dust particles are very small, perhaps only a micron across, which allows the pressure of solar radiation to push them rapidly away from the nucleus.

The two researchers, together with Jessica Agarwal (Max Planck Institute for Solar System Research) detail their findings in a paper submitted to Astrophysical Journal Letters. Jewitt also presented these results at the just-concluded European Planetary Science Conference in London.

A final thought: Dynamical modeling shows that the Geminid stream should dwindle away in less than about 1,000 years, so it must be getting replenished somehow. But Phaethon's brief outbursts yield only about 300 tons of fine dust — hardly enough gritty bits to create all those bright, beautiful "shooting stars" every December. So something more vigorous must have occurred in the recent past.

I dont doubt the validity of the contour plot over wildly varying intensity levels as shown; presumably a degree of thought has gone into it (or do I?) but as anyone who has played with imaging data knows, I wouldnt trust that plot any further than I could throw it into the wind.

"It wasn't a rock... It was a rock comet!" (apologies to the B-52s). There used to be a sense of a simple dichotomy: that there are comets, and there are asteroids, and these are two different types or species of objects. But it can perhaps be useful to think of a "comet" as a behavior of a minor planet with any degree of volatility. A comet is not a species of object; it's a way of life --a behavior. Oort cloud visitors are nearly all volatiles and their cometary behavior is all that they do. But of course this cometary behavior can only be temporary for objects that are perturbed into short-period orbits where their volatiles mostly evaporate or otherwise escape. There are plenty of cases of objects classified as minor planets/asteroids which occasionally act cometary, and there are some very unusual comets which are quiet as rocks until they experience rare outburts --remember that amazing explosion on Comet Holmes in 2007? Perhaps this "rock comet" Phaethon experienced a similar explosion of a pocket of volatile material a few centuries back. And if so then it easily could "pop" again in the not so distant future... Something had to replenish the Geminids.

If it’s in the key of C, 4/4 time and uses just three chords, it could definitely be a rock comet.

Icy objects become comets in the inner solar system. That is, start vaporizing and growing a tail. And I suppose a rock would start to vaporize when really close to the Sun, becoming a comet. We hardly see this, as they'd be too close to the Sun to see them from Earth. Except maybe a solar eclipse, but the corona still maybe would wash out a rock comet.

How long would a rock comet last anyway? Say an object 100 meters diameter, and getting close enough to grow a tail, but not suffer drag from the Sun's atmosphere.

How close to Earth is the orbit of Phaeton ?
Will it appear close enough to see/image in backyard telescopes in the near future ?

As the mission was first conceived as a national space project by the Netherlands, and the spacecraft service module was built under the auspices of the Dutch Space Agency and final assembly, integration and testing was conducted by Fokker Space, it's a gross misrepresentation to call it "NASA's Infrared Astronomical Satellite". NASA were responsible for the telescope and launch, with the British providing the ground segment. Credit where credit is due...