An unprecedented yearlong celestial celebration —the International Year of Astronomy 2009 (IYA2009) — officially came to a close on January 9th and 10th in Padua, Italy. The recurring theme of the event, however, was that the groundbreaking year was just a beginning of increased outreach and education activities.

The brainchild of astronomer and former IAU President Franco Pacini, IYA2009 marked the 400th anniversary of Galileo’s historic observations of the heavens, which took place near to the closing ceremony’s venue at the University of Padua. Galileo himself was watching the recent proceedings from a ceiling fresco in the great hall where he taught mathematics for 17 years, a venue that had the speakers and audience in awe. Even one of Galileo’s telescopes was on hand on its first-ever return to Padua, along with a piece of one of Galileo’s first observational targets — the Moon — brought to Earth by Apollo astronauts. 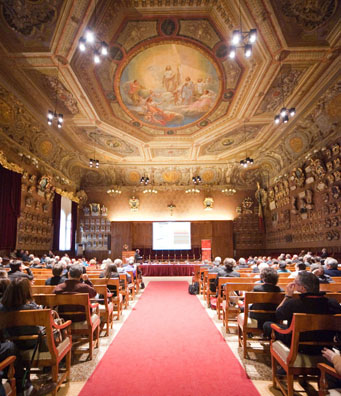 The historic hall where Galileo taught mathematics for 18 years was the venue for the IYA2009 closing ceremony.

The IAU president who shepherded the worldwide effort from the beginning through its culmination, Catherine Cesarsky, said no one was sure just what to expect at the earliest meetings where ideas for the year were first considered. But every one of those early ideas had become a reality by year’s end, along with many more innovative ideas from around the world. Cesarsky added that all of the goals set for IYA2009 were reached except one — for every person on Earth to hear or see something about astronomy during 2009. That goal may yet be reached belatedly in the year’s wake as all but one of IYA2009’s own Cornerstone Projects will carry on in some form, along with many Special Projects and countless other programs inspired by the year.

Newly-installed IAU president Robert Williams made the observation that the need for astronomy to reach out to others is nothing new. “Education and outreach has been an important part of this since the beginning”, he said, noting that Galileo himself had to explain his work to the patrons he depended on for funding. From the beginning, IYA2009 was considered to be just the beginning of new education and outreach programs.

Tomasso Maccarno of the Italian National Institute for Astrophysics said that the ceremony was not just the end of the year but the beginning of an “International Century of Astronomy.” He further predicted that celebrants at closing ceremony for the century-long festivities in 2110 would declare it the beginning of the “International Millennium of Astronomy”, and promptly declare an end to any more closing ceremonies. Playing on IYA2009’s motto, “The Universe, yours to discover”, Maccarno proclaimed the coming centuries’ motto to be “Countless suns, many worlds, one universe, ours to discover.” 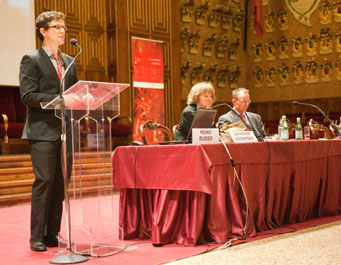 There were data to back up the lofty claims of the astronomy community’s leaders, presented by Pedro Russo, IYA2009 Coordinator, and Lars Lindberg Christensen, IYA2009 Secretariat Manager, and the numbers would impress any skeptic. But the most convincing evidence came in the form of presentations by the leaders of the effort in six diverse countries — Mozambique, Egypt, Honduras, Vietnam, Ukraine and India — who described innovative programs based on local culture and astronomical heritage in addition to featuring the findings of the most recent scientific discoveries.

Ukraine highlighted its many historic observatories, while its government minted two new coins featuring astronomy. Embedded in one of the coins was a 0.2-carat topaz representing the Earth in a diagram of the solar system. India focused on reaching all of its diverse cultures with a national radio channel broadcasting 52 programs on astronomy in 19 languages, mobile planetariums and astro-vans reaching hundreds of remote villages to teach and combat superstition, and a float in the country’s 60th Republic Day celebration parade being seen by one billion of its citizens! But these few examples barely scratched the surface of all that took place during the year in these countries and the rest of the 148 nations that officially participated.

Noting that the increased cooperation of professional and amateur astronomers was one of the greatest accomplishments of the year, IAU president Williams said, "The legacy of the IYA will almost certainly be outreach and education.” Much of the credit for the year’s successes was given to the thousands of amateur astronomers around the world whose participation was an important factor in the year’s success.

The biggest public outreach efforts, such as 100 Hours of Astronomy in April and Galilean Nights in October, were opportunities for amateur astronomy to shine, and millions were given a first look through amateur-owned telescopes in countries worldwide. The worldwide amateur community is energized, in some countries for the first time, and there is a lot more to come as everyone works to maintain the momentum of the year. Along with other continuing and expanding programs, Astronomers Without Borders is organizing a follow-up to the historic 100 Hours of Astronomy with a month-long celebration in April 2010 — Global Astronomy Month — giving amateurs another opportunity to share the sky.

Perhaps Cesarsky will yet see the realization of her goal, albeit belatedly, that every person on Earth hear or see something about astronomy.