A century ago, most of the world's premier observatories sat atop hills just a brisk walk from their home institutions. But no more. These days the Big Eyes of astronomy crown some of the most remote and hard-to-reach spots on Earth: from Mauna Kea in Hawaii to Cerro Pachón in to Chile to Las Palmas in the Canary Islands to Concordia Station in Antarctica — and of course in outer space. Consequently, most of us never get to glimpse the daily goings-on at a modern observatory. 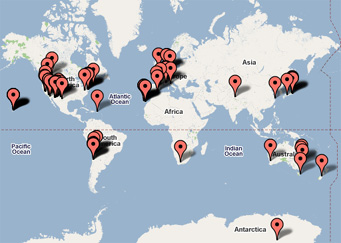 "Around the World in 80 Telescopes" features live webcasts from facilities around the world — and even some from orbit! Click here to access this map interactively.

But this weekend you'll get that chance — from the comfort of your home or office! All you have to do is fire up the live webcast here or here from "Around the World in 80 Telescopes," sit back, and enjoy the views.

This unprecedented scope-a-thon kicks with a live feed from the Gemini North observatory in Hawaii on Friday morning, April 3rd, at 9:00 Universal Time (5:00 a.m. EDT). Then every 20 minutes the scene switches to a different facility. You'll be impressed with all the big-name observatories on and off our planet that have signed up to participate, among them Keck Observatory (10:00 UT), Hubble Space Telescope (17:20 UT), and ESO's Very Large Telescope in Chile (April 4th, 2:20 UT).

During the 24-hour webcast, you can send an email to the show or keep up with the team on Twitter (@telescopecast). And you can view a 16-minute preview of what's to come — featuring a behind-the-scenes visit to the VLT — at the ustream.tv website.

This global event has been organized by the the European Southern Observatory and will be coordinated from its headquarter's in Garching, Germany. It's a key component of "100 Hours of Astronomy," which in turn is a cornerstone of this year's International Year of Astronomy celebration. In fact, thanks to the drive and vision of organizer Mike Simmons, this weekend promises to be the single biggest event of the entire IYA program. (Mike describes what he's got planned here.)

By the way, Sky & Telescope is a proud cosponsor of the 100 Hours of Astronomy.

hello, and happy new year (for Iranians, new year begin at 20/3/2009, but 21/3/2009 is the first day of 1388 SHAMSI (Sun based year).
we named first 13 days of each new years to NOWROOZ, and the 13 FARVARDIN is named to the nature day. it's 2'nd of April 2009, and our 5 astronomical group at 5 venues, with their telescopes, explain the new way for observing, cheap and easy. it's really cheap, for beginners.
please read our websites, and put your comments for help to us, that have better activity for IYA: http://www.iyua.40sotoon.net
thanks.

After reading your blog, went to check out the "around the world in 80 telescopes" at both the 100 Hours and UStream websites and failed on both accounts. The Ustream site is one of the WORSE I've ever tried to navigate, and I'm no newcomer to the web. I saw nothing. The 100 Hours site, though navigable, was not functioning. When you clicked on the appropriate link the site just regurgitated and took you nowhere. VERY disappointing. This IYA project, from my seat, was a failure.
Regards,
JR Neuberger
Editor, Delaware Astronomical Society's FOCUS newsletter
Wilmington, Delaware