Japan has been launching satellites since 1970, but I didn't get to see and hear my first Japanese countdown until last night. 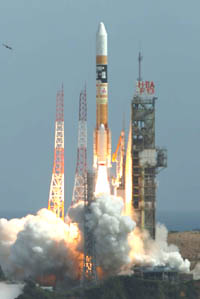 An H-IIA boosters lofts the Moon-bound orbiter Kaguya from Tanegashima Island on September 14, 2007.

I was 7,500 miles from the space complex on Tanegashima, a small island at Japan's southern tip, but — thanks to the wonders of streaming video — I looked on and cheered as a powerful H-IIA rocket leapt skyward from its seaside gantry and heaved a craft called Kaguya into space at 10:31:01 a.m. Japanese time.

Initially Kaguya will have a wide, looping orbit around the Moon, eventually settling into a circular track just 60 miles up. From there it'll photograph lunar features in stereo, analyze surface chemistry with spectrometers, and use radar to probe the Moon's upper crust. It's all neatly bundled into an SUV-size package weighing 3 tons. You can read more about the mission and its objectives (in English) here.

But wait — there's more! Kaguya also carries two drum-shaped "subsatellites." Once released into their own lunar orbits, one will serve as a radio relay (for when Kaguya is on the Moon's far side), and the other will be part of a very long baseline interferometry (VLBI) experiment to map the lunar gravity field. 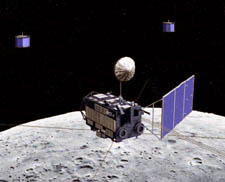 Once in its final lunar orbit, Japan's Kaguya spacecraft will release a pair of smaller probes to aid in its scientific mission.

This mission was developed by the Institute of Space and Astronautical Science, Japan's equivalent of the Goddard Space Flight Center in Maryland. But in 2003, ISAS combined with other agencies to the Japan Aerospace Exploration Agency, or JAXA. I'll give JAXA credit: it provided some great video last night, including play-by-play commentary in Japanese and English. But it took some digging to come up with launch photos.

This mission used to be called SELENE, short for the Selenological and Engineering Explorer. Thankfully, Japanese officials abandoned that mouthful for Kaguya, an enchanting lunar princess in a revered Japanese folk tale.

And if you like lunar exploration, there's plenty in store for you. Kaguya is the second in an international parade of lunar missions that includes the ESA's recently concluded SMART 1, India's Chandrayaan 1, Chang'e 1 from China, and NASA's Lunar Reconnaissance Orbiter.

Would the Kaguya satslite be able to photograph the lunar lander that is parked on the moon surface? And would those pictures be available to the public.

Apparently the TV system is included primarily to take video of Earthrise over the lunar landscape; details here. — Kelly Beatty