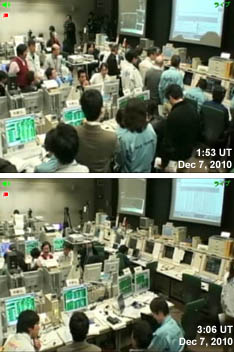 JAXA's Sagamihara control room was crowded with worried engineers and officials when Akatsuki failed to recontact Earth after reaching Venus. Then the room nearly emptied when a meeting was called to discuss possible malfunctions and a course of action.

A spacecraft named Akatsuki was about to fire its braking rocket and go into orbit around Venus. The craft radioed that a 12-minute-long engine firing had begun as planned at 23:49 Universal Time on December 6th, then it slipped behind the planet and out of radio contact.

I don't speak Japanese, but the lack of high-fives and worried faces in the control room spoke volumes as the minutes ticked by. Akatsuki didn't reestablish its radio link after supposedly emerging from behind the planet, and when a transmission finally arrived it was intermittent and came via an emergency antenna.

In the hours since, the mission team has worked frantically to understand the situation. At a press conference today, project manager Masato Nakamura reported that the spacecraft is functioning but has put itself in a standby mode with its solar-cell panels facing the Sun. It's also spinning slowly, every 10 minutes, and radio contact is possible only for 40 seconds at a time. Engineers are using ground antennas in Japan and also those of NASA's Deep Space Network to send commands to stabilize the spacecraft and to determine its trajectory.

After a hectic day of trying to find some answers, Nakamura again appeared before reporters in Sagamihara to announce that Akatsuki had "failed to get into orbit around Venus." JAXA's official statement about the incident doesn't say much.

However, a Google translation of press-conference comments suggests that the spacecraft experienced a sudden, unexpected rotation 2½ minutes after the orbit-insertion maneuver began, apparently due to errant thruster firings. In response, an on-board computer turned off the braking rocket and immediately put the spacecraft in an emergency standby mode.

Unfortunately, the premature shutdown came well short of the minimum burn time (9⅓ minutes) needed to be captured by the planet, so the spacecraft continued past Venus and into interplanetary space. 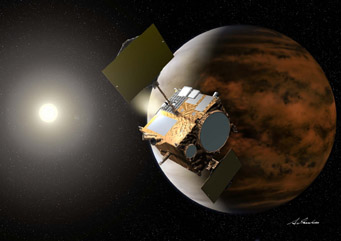 Japan's Akatsuki spacecraft is intended to operate for at least two years after it begins orbiting Venus in December 2010.

There's not enough fuel to try to correct the miscue by reversing course. Instead, Akatsuki will coast along a solar orbit that will return it to the vicinity of Venus in about 7 years. Right now that reunion will bring the craft no closer than 2.3 million miles (3.7 million km). But Nakamura thinks enough fuel remains on board to close that gap by changing course and to attempt another orbit-insertion maneuver.

The question then is whether the spacecraft and its instruments can survive a long interplanetary cruise. Within the next few years solar activity will peak and subject the craft to intense bursts of high-energy charged particles. The team hopes to test the spacecraft's cameras periodically, perhaps by using them to map the distribution of interplanetary dust.

Akatsuki means "Dawn" or "Daybreak" in Japanese (not "Somehow," as Google translates it), but it's also been called Planet C and Venus Climate Orbiter. Its boxy, desk-size structure, weighing about a half ton, carries five cameras to study the planet's dense, cloud-choked atmosphere as never before. 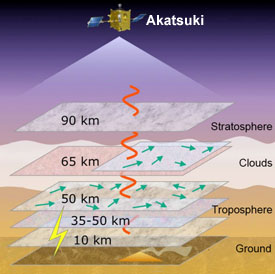 A schematic diagram shows how cameras aboard Japan's Akatsuki spacecraft can probe different levels in the atmosphere of Venus. Click on the image for a larger version.

Three of these cameras record infrared light at 1, 2, and 10 microns, wavelengths that probe specific altitudes and can reveal the surface. A wide-field ultraviolet imager will track motions of sulfur dioxide in the stratosphere, and a visible-light camera will monitor the planet's night side for airglow emissions and lightning. (Here is a really good summary of the mission and its instruments.)

Launched on May 20th, Akatsuki was supposed to operate at least two years from a looping near-equatorial orbit that ranged from 200 to 50,000 miles (300 to 80,000 km) above the planet. Its scientific mission would have nicely complemented that of the Europeans Space Agency's Venus Express, which has been orbiting the planet since April 2006.

JAXA has established an investigation committee to determine what went wrong and why. Nakamura says he is sorry that his team "could not meet the expectations of everyone in the nation."

The whole situation is eerily reminiscent of the fate that befell another Japanese interplanetary probe almost exactly seven years ago. Ground controllers lost control of Nozomi on December 9, 2003 — just 5 days before the spacecraft was to enter orbit around Mars.