The raw images are in from Juno's flight on the night of Monday, July 10th, over the largest and most famous storm in the solar system. All instruments aboard NASA's Juno spacecraft were at the ready, including the spacecraft's JunoCam imager.

"For hundreds of years, scientists have been observing, wondering, and theorizing about Jupiter's Great Red Spot," says Juno principal investigator Scott Bolton (Southwest Research Institute) in a recent press release. "Now we have the best pictures ever of this iconic storm. It will take us some time to analyze all the data from not only JunoCam, but Juno's eight science instruments, to shed some new light on the past, present and future of the Great Red Spot."

Specifics on the flyby encounter are amazing. This pass was Juno's sixth perijove flyby (closest pass near Jupiter) where science was collected. Perijove occurred at 9:55 p.m. EDT / 1:55 UT (July 11th) 2,200 miles (3,500 km) above Jupiter's cloudtops, less than half of the diameter of the Earth. Just 11 minutes and 33 seconds later, Juno passed 5,600 miles above the Great Red Spot, closer than any other spacecraft ever.

It'll be a while before we get analysis of the science data taken during the flyover, but for now, the view is just mesmerizing. The swirling clouds really take on a 3-D appearance, hinting at the shadowy depths below.

But the real stars of the show were the volunteers such as Jason Major, Kevin Gill, and others, who took the time to process JunoCam's raw images posted online. NASA had initially promised a press release for the pass on Friday, July 14th, but the cat was out of the bag and across social media once images hit the Juno website yesterday.

"The raw images that arrive from Juno are amazing but lack contrast and color saturation," says graphic designer and space enthusiast Jason Major. "By using professional image editing software like Lightroom and Photoshop, Jupiter's true beauty can be revealed — which is exactly what the public wants to see from this awesome mission."

Consistently gracing the Jovian cloud tops at least since 1830, the first convincing observation of the Great Red Spot may be attributed to Giovanni Cassini in 1665. In fact, a tantalizing canvas painted by Donato Creti in 1711 actually depicts Jupiter with the Galilean moons . . . and a red spot on the planet's disk. Astronomers aren't sure just why this system is so apparently stable and long-lived; other storm systems come and go, and the planet's Southern Equatorial Belt is known to pull a disappearing act roughly every decade or so.

Yet the Great Red Spot is shrinking, and given its accelerating rate of shrinkage, sometime later this century it may vanish altogether. It's certainly smaller now than what the Pioneer and Voyager spacecraft saw during the first flybys of Jupiter in the 1970s. Its red hue is fading, too — to our eyes, it now appears more brick- to salmon-colored at the eyepiece. Still, the spot deserves its great name: At 10,159 miles wide as of April 3, 2017, the storm system remains bigger than Earth.

Juno is one year into its mission, and it has already racked up 71 million miles around Jupiter after arriving in orbit just over a year ago on July 4, 2016. Launched from Cape Canaveral atop an Atlas 5 rocket on August 5th, 2011, Juno continues to dazzle, providing key insights into the interior structure and the magnetic field of the largest planet in the solar system. First science discoveries from the Juno mission announced last month were hints at a large, "fuzzy" core and a magnetic field twice as strong as expected.

Juno was initially due to enter a shorter 14-day orbit around the planet, until engineers opted earlier to stay in the current 53-day orbit rather than risk another engine burn with a faulty engine valve. This means a longer span between science passes, but NASA has also granted Juno more time, extending the mission out to July 2018. The perijove passes of Juno precesses in longitude with every subsequent pass. Juno's next perijove pass occurs on September 1, 2017.

Juno will end its noble mission a year from now with a fiery plunge into Jupiter's atmosphere. This move is part of planetary protection, eliminating the possibility that Juno would contaminate Jovian moons with Earth bacteria in the far future.

We can thank NASA and the Juno team for some amazing views this week. Kindergarten depictions of the solar system wouldn't be the same without the Great Red Spot adorning Jupiter.

Seen any speculation about the chemical that causes the red color in the spot?
I recall it might be rich in ammonia?

The reddish areas of Pluto have been attributed to organic compounds called "tholins." These being compounds formed as a result of carbon-based molecules being bombarded by cosmic radiation which reaches the surfaces of Pluto as there's no protective magnetic-field as we have on Earth. I don't know if the GRS (Great Red Spot) is composed of similar, but it's quite likely similar exo-chemistry is involved throughout our solar-system.

Am I the only one who sees the fetus in utero? 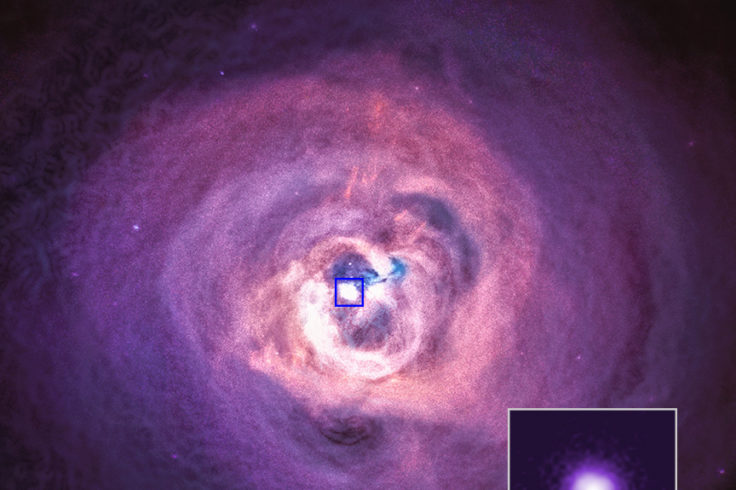