Update, June 6: Still no report of any impact mark being imaged on Jupiter by anyone.

Was the impactor too small to leave much "ash"? Did it break up and burst too high in the atmosphere to dredge up dark stuff from deep below? Or both?

Update, June 4: More than a day after the impact, many observatories have had a chance to image Jupiter when the site was back in view (Jupiter has a rotation period of about 10 hours), and none have reported a new marking. 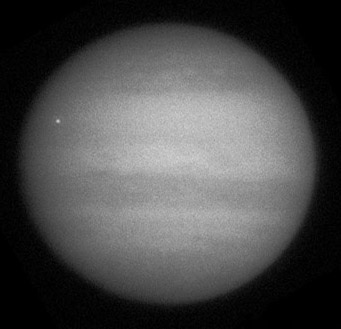 The bright, two-second flareup appears near Jupiter's left (celestial west) limb in this frame from a video that Anthony Wesley was recording at 20:31:29 UT (according to his time stamp) June 3, 2010. South is up. Video.

Original story, June 3, 2010: Not just one but two veteran planetary imagers caught the shots of a lifetime on June 3rd, when they both videorecorded a tiny, brilliant flare on Jupiter swelling and fading at 20:31 Universal Time. The flare brightened and faded in about two seconds. Its progress is recorded on many frames of each video.

The flare may have looked small from Earth, but it must have been titanic to be visible from Jupiter's distance — and on Jupiter's daylit side, no less. It was presumably the impact of a small asteroid or comet nucleus.

Veteran planetary imager Anthony Wesley, an amateur in Murrumbateman, Australia, was recording in red light at the lucky moment, intending to create another of his many excellent stacked-video color stills of Jupiter. He saw it happen on his monitor in real time. Watch his video. The meteor "doesn't seem to have left any mark, so it probably burned up in the upper atmosphere before it reached the cloud deck," suggests Wesley. "There were no visible remains at the impact point for the next half hour or so, until sunrise put an end to the imaging." 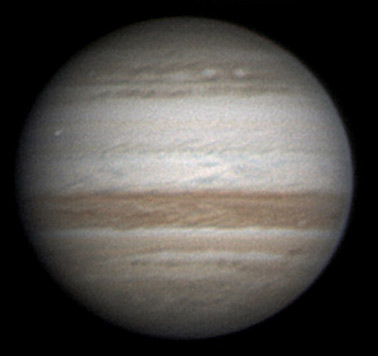 At the same moment, Christopher Go was imaging Jupiter several thousand miles away in the Phillipines. "Today was suppose to be a routine imaging run," he writes. "Seeing was perfect. And this was on the boring side of Jupiter. On my second image sequence using the blue filter, I luckily imaged an impact on Jupiter. I did not see this when it happened but Anthony sent an alert on this suspected impact and I was able to confirm this with my video." Go's video of the Jupiter impact provides ironclad confirmation of the event!

Jupiter's central meridian longitude at the time of the images was 34° (System II), but the site of the impact is at 343° (System II). There has been confusion about this on the internet. The latitude is 16° south.

This region was again turned toward Earth when Jupiter was up before dawn as seen from Europe and Africa on June 4th. Writes John H. Rogers of the British Astronomical Association: "This morning [the 4th] around 3:30 UT, observers in England, France and Italy looked for an impact spot but recorded nothing definite. However, the images were at low resolution (due to the low altitude and bright dawn sky), so the images do not exclude a smaller scar. Observations of this site over the next few days will be very important."

Here are the predicted transit times (in Universal Time; GMT) when the impact site will be on Jupiter's central meridian for the rest of June. The UT dates are in bold:

Wesley was already famous for discovering an impact on Jupiter last July 19 — by the dark mark it left behind — spurring astronomers around the world to study that serendipitous event from both the ground and space.

Coincidentally, Wesley made his latest find on the same day that the Hubble team analyzing his July 2009 impact announced that that strike was an asteroid, not a comet as in the great Jupiter splash of 1994. See press release.

Why Such a Quick Flare?

The briefness of the June 3rd meteor flare, compared to the long duration of very large, bright fireballs in Earth's atmosphere, shouldn't really be a surprise. Jupiter is more massive, so incoming objects are traveling several times faster when they strike Jupiter than objects striking Earth. (Jupiter's escape velocity is 60 kilometers per second compared to 11 km/s for Earth. This speed adds to whatever the incoming object's initial speed was before it got close enough to feel the planet's gravity.)

Moreover, Jupiter's surface gravity is 2.5 times Earth's, and this compresses its atmosphere's scale height: how quickly the atmosphere goes from thin to thick as you move down through it. So a meteor at Jupiter, once it enters the upper atmosphere and first lights up, also has a shorter distance to go before it encounters air so thick that breaks up and explodes.

Check back here for updates! 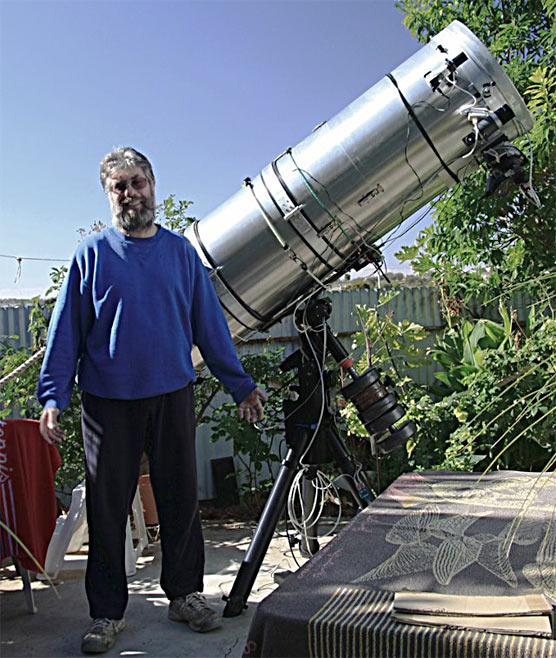 Anthony Wesley with his 14.5-inch reflector, in a picture taken seven hours after his pre-dawn discovery. 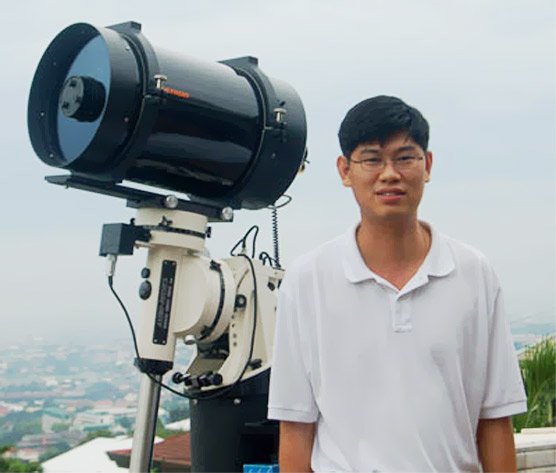 Christopher Go and his Celestron-11 on his balcony in Cebu City, Philippines.