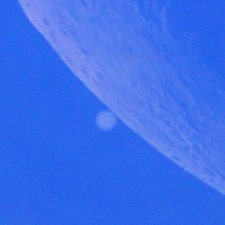 Jupiter's belts are faintly visible as it disappears behind the Moon's bright limb.

Observers across the eastern part of North America were treated to a daytime occultation of Jupiter by the thin crescent Moon on November 9, 2004. Fortunately, most observers had either clear skies or scattered clouds, allowing some excellent views of the event.

Jupiter was readily visible even in 7 x 35 binoculars as it approached the bright limb of the 11-percent-illuminated Moon, though it was impossible to pin down the precise moments of first contact and disappearance at such a low magnification. But of the dozen Sky & Telescope employees assembled to watch the event, only keen-eyed senior editor Dennis di Cicco managed to spot Jupiter reappearing from behind the Moon's dark limb. 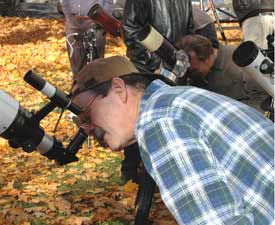 Roger Sinnott, editor of Sky & Telescope's Celestial Calendar department, checks that Jupiter and the Moon are still on track.

Jupiter's next occultation will also be visible across much of eastern North America, and it will be much easier to see, as it will occur when the sky is dark, on the night of December 6–7. See the December 2004 issue of Sky & Telescope (page 75) for details, or the online article "A Late-Night Jupiter Occultation."