It's been more than a month since July 19th — the night when Anthony Wesley, a software engineer by day and a dedicated amateur astronomer by night, discovered something amiss on Jupiter. 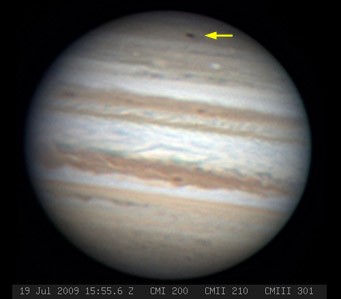 Taken on July 19, 2009, Anthony Wesley's image of Jupiter shows a dark marking strikingly similar to the ones left when Comet Shoemaker-Levy 9 crashed into Jupiter in 1994. South is up.

From his home observatory just outside Murrumbateman in New South Wales, Australia, Wesley identified a small, new dark spot near the planet's south pole using a custom 14½-inch f/5 reflector and a high-end camera and filters — not the usual gear found in stargazers' backyards, but by no means rare among serious observers. Among amateurs, planetary photography in particular has been revolutionized in recent years by video imaging combined with smart frame-stacking software.

A quick check ruled out a transiting Galilean moon or its shadow as the cause, and the spot was absent in images that Weslet had taken two days earlier. That's when the importance of what he'd found began to sink in. His spot looked just like the ones created exactly 15 years earlier when fragments from Comet Shoemaker-Levy 9 slammed into the giant planet. "If it really was an impact mark," Wesley notes in an online report, "then I had to start telling people, and quickly." 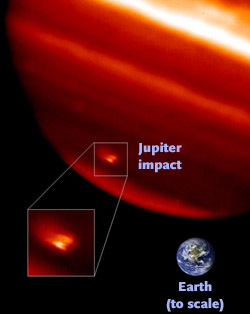 On July 20, 2009, one day after Jupiter suffered an impact, the Keck II telescope recorded this detailed infrared view. Click on the image for a larger view.

According to John Rogers, director of the British Astronomical Association's Jupiter Section, no spot was seen at the site during the planet's previous rotation some 10 hours earlier. Thet means the impact must have occurred on Jupiter's far (dark) side sometime between 7:40 and 14:00 UT on July 19th.

As news of Jupiter's new feature spread during the next hours and days, other amateur astronomers and major observatories swung into action. Glenn Orton, a planetary scientist at NASA's Jet Propulsion Laboratory, was among the first to get word. Luckily, the next night Orton and his team had an observing run already scheduled with NASA's Infrared Telescope Facility atop Mauna Kea in Hawaii. They made room in their schedule for Jupiter. The IRTF images showed the spot as very bright, meaning it was quite high up in Jupiter's atmosphere. As Orton explains, "For me, this totally clinched the case that this was an impact." Team member Leigh Fletcher also has a blog detailing the IRTF run. 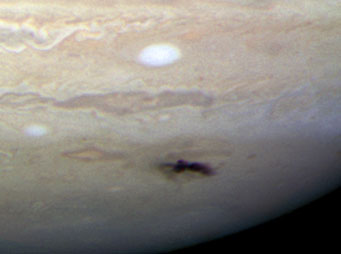 Hubble's new Wide Field Camera 3 was rushed into service to take this closeup view of Jupiter's impact mark on July 23, 2009. Click here for a larger view.

Observers at other major observatories abandoned their scheduled targets to slew over to Jupiter. Paul Kalas (UC Berkeley) and Michael Fitzgerald (UCLA) had time on the 10-meter Keck II telescope, also on Mauna Kea. With help from Kalas's Berkeley colleague Franck Marchis, they tracked down the spot with an infrared camera that revealed a double-lobed center surrounded by a darker halo. The halo was quite reminiscent of those around the Shoemaker-Levy 9 impacts. Marchis describes the tense excitement in his online blog.

Nearby on Mauna Kea, the 8.1-meter Gemini North telescope was recording the spot glowing in the deep infrared. "At these wavelengths we receive thermal radiation (heat) from the planet's upper atmosphere," explains observer Imke de Pater (UC Berkeley) in a Gemini press release. "The impact site is clearly much warmer than its surroundings, as shown by our image taken at an infrared wavelength of 18 microns." 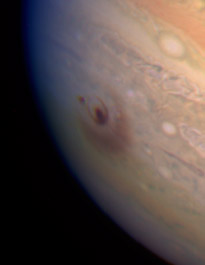 After Comet Shoemaker-Levy 9â€™s remains struck Jupiter in July 1994, the Hubble Space Telescope captured this double hit: a large multiring spot caused by the G fragment and a small dark spot from the D fragment.

NASA managers even interrupted their checkout of the recently refurbished Hubble Space Telescope and quickly assembled a team of veteran observers led by Heidi Hammel (Space Science Institute). On July 23rd they used the orbiting observatory and its newly installed Wide Field Camera 3 to record amazing close-ups of the dark splotch, which by then had already begun to smear out in the east-west tug of war created by Jupiter's zonal winds. Several separate darks blobs are evident, perhaps burped up separately from the impact location. The team took more HST images later on, but those have not yet been made public.

The spot's similarity to the atmospheric stains created during the "Great Comet Crash" of 1994 is, well, striking. (For a lighthearted take on the events then and now, check out this entertaining 4½-minute music video created by IRTF observer Kelly Fast and others.) 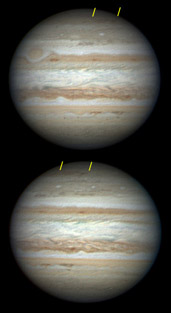 The impact scar on Jupiter has spread sideways and broken up into faded, feathery bits. Yellow ticks mark its approximate ends in images taken 75 minutes apart on August 17, 2009, when the System II central-meridian longitude was 182° (top) and 227°.

Back then, no one had ever observed a planetary impact, so the resulting Earth-size stains in Jupiter's atmosphere caught astronomers by surprise. Over six days, they looked on in amazement as 20 fragments from Comet Shoemaker-Levy 9 slammed into Jupiter, one by one, at 40 miles (60 km) per second. Those pieces came from a precursor body that was about 1 mile across before tidal forces by Jupiter pulled it apart into a "string of pearls" during a close passage two years earlier.

This time, at least, they knew what they'd found. July's impact likely involved a single interloper no more than few hundred yards (meters) across, likewise creating a superficial powder burn with a black core (where the impactor exploded below Jupiter's uppermost cloud layer) and a broader, fainter, asymmetric halo (fallback material from the towering plume of debris).

We'll likely never know whether the colliding object was a small asteroid or a comet — it was far too small to be picked up telescopically prior to its strike. "The problem," laments de Pater, "is to unravel stuff dredged up from Jupiter's deeper atmosphere (like ammonia) from that of the impactor."

Another snag involves disentangling the spectral signature from any water deposited by a comet in Jupiter's atmosphere and that from the ever-present water in Earth's own atmosphere.

Meanwhile, the last vestiges of Jupiter's overnight sensation have nearly faded from view. According to the BAA's Rogers, the impact site was still nearly black as of August 1st but became fainter in the days thereafter as it stretched out.

More recent images taken by Christopher Go show that evidence of the collision had become nearly impossible to pick out by August 17th. He writes, "The Wesley impact remnant has faded a lot. It is difficult to see now even in almost perfect conditions." Yet he and other imagers continued to record its fading traces as of at least August 24th.

I'm sure to get the full story when I attend a meeting of planetary scientists in early October. Until then, dynamicists are already chewing on the fact that Jupiter has endured two well-observed collisions within a span of just 15 years.

So just how common are they? Have any other Jovian impact marks ever been seen telescopically, without the observers knowing what they had? You'll find the answer in the November issue of Sky & Telescope, which is being printed right now!

I know about the other observation and went and tried to google it up. But I couldn't find it so I went back to reading the article. Well, I won't do the spoiler...it's a great story. 😀

I know about the other observation and went and tried to google it up. But I couldn't find it so I went back to reading the article. Well, I won't do the spoiler...it's a great story. 😀

The above site has an image by Maximo Suarez that proves the mark is still prevalent as of 8/22 late in the day. Therefore it's premature to say this mark is gone, sorry.

The image commented on above is a mirror image as you will see.

The bottom left image by Hatanaka reveals the Wesley Mark to still be prevalent after 40 days.

Also, unless this is a case of several image artifacts, the Wesley Mark area when imaged on the limb seems to be causing a slight sinkhole effect in that part of Jupiter. I have noticed this on several images now when CMII is around 135 or 270 approx.

The bottom left image by Hatanaka reveals the Wesley Mark to still be prevalent after 40 days.

Also, unless this is a case of several image artifacts, the Wesley Mark area when imaged on the limb seems to be causing a slight sinkhole effect in that part of Jupiter. I have noticed this on several images now when CMII is around 135 or 270 approx.

Quote from your caption to the Jupiter animation from yesterday:

"Notice that rather than just spreading out, the original impact site seems to keep pouring out black stuff that then drifts away."

This is what you would expect if this mark is actually a DEEP INTERNAL EVENT and NOT AN IMPACT EVENT! This Mark seems to be SOURCING from longitude 216.

Should we reconsider what we are looking at especially since this mark has not gone away as planned?

Kazunori Ando pics on this link from 9/5, especially Fig. 5 shows the mark still very prominent and as large in width as the GRS now!

Oops! What's this? Scroll down to the bottom of this page to see Kazunori Ando's pics from September 10!

I spy a Wesley Mark clearly on the limb...I thought this was supposed to be gone!

Guess not! and it seems a void is forming...hmmmm. 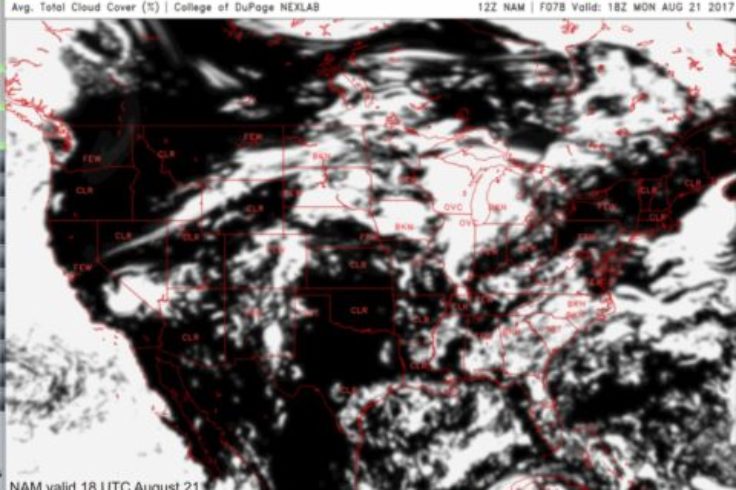 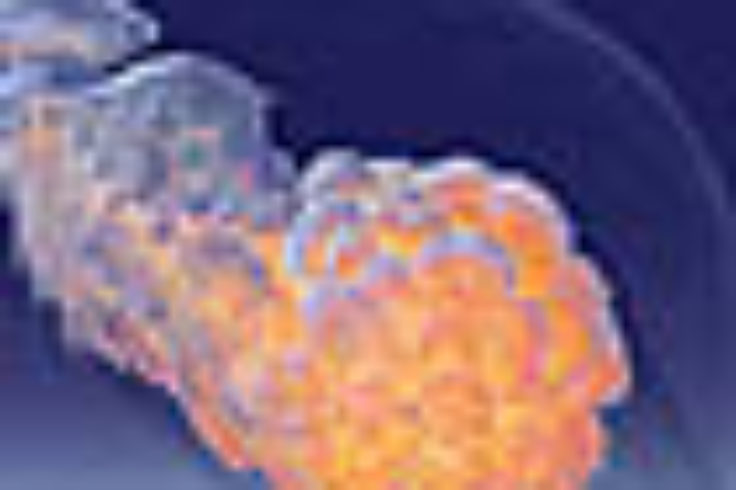 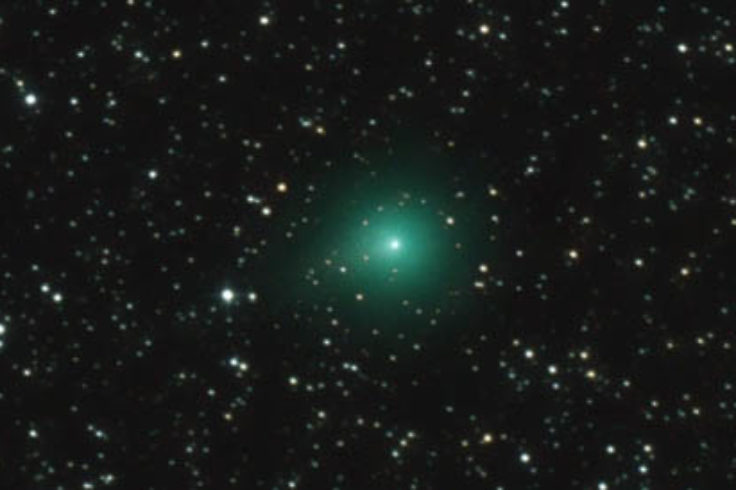