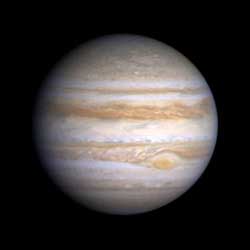 Jupiter, seen here by NASA's Cassini spacecraft, has more known moons than any planet in the solar system — 39 in all. Eleven of them were recently named by the International Astronomical Union.

The International Astronomical Union (IAU) recently named 11 Jovian satellites that previously bore only numerical designations. "The names are all lovers of the Roman god Jupiter, or, in some cases, children and grandchildren of Jupiter's lovers," says Brian Marsden, director of the Minor Planet Center at the Smithsonian Astrophysical Observatory. German librarian Jürgen Blunk created the naming scheme, which categorizes Jupiter's outer satellites by orbital motion. The satellites with prograde motions (orbiting in the same direction as Jupiter orbits the Sun) received a name ending in "a," while those in retrograde orbits were given a name ending in "e." The only oddball is Themisto, sonamed because its orbital period is much shorter and its orbital plane is much more inclined than the other 10.

Themisto is odd for another reason — it had been seen before. In 1975 Charles Kowal noticed a faint blip in a photograph taken from the 48-inch telescope atop Palomar Mountain. The object named S/1975 J1 then went undetected for more than 25 years until Scott Sheppard and his colleagues at the University of Hawaii rediscovered it, along with nine other newly named Jovian satellites, in the year 2000.

Another finding, currently designated S/2000 J11, has not been observed again since its discovery. Satellites must be observed at more than one opposition in order to receive a name because "orbits are never well-established from a single opposition," says Marsden. Hence the delay in naming Themisto.

Jupiter's enigmatic clumping of retrograde and prograde motions into two distinct groups continues to stump scientists. "It's not very clear where the segregation comes from," says David Nesvorny, a dynamicist at the Southwest Research Institute in Boulder, Colorado. "One idea postulates that it is a result of collisional evolution among the moons. A moon in between the prograde and retrograde groups could be impacted and destroyed — that may be how the gap was created."

Sheppard and his team discovered 11 more satellites in 2001, but only four of the 11 have been recovered since their original discovery. "I expect there will be some more recoveries within the next two weeks," stipulates Marsden.

Marsden hopes to name the additional moons before the next IAU General Assembly meeting, scheduled for July 2003 in Sydney, Australia. While discoverers of comets and asteroids enjoy naming rights, discoverers of planetary moons must yield this privilege to the IAU. "I think the convention is appropriate, but not very imaginative," says Sheppard. "However, we are currently recovering the other 11 satellites we discovered and looking into names for them."

Jupiter now has 39 moons, the most of any planet in our solar system. But Marsden isn't worrying about naming future Jovian satellite discoveries. "Jupiter had a wealth of lovers, so we're in no danger of running out," he says.