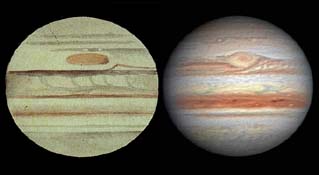 Compare the size (and color) of Jupiter's Great Red Spot as drawn by Thomas Gwyn Elger in November 1881 (left) and as imaged by Texas amateur Ed Grafton (right) 120 years later. South is up.

Telescopic observers from the 19th century may not have
had the technological wizardry available to modern-day skywatchers —
but they apparently had an easier time spotting Jupiter's signature
feature, its Great Red Spot. According to Amy Simon-Miller (NASA/Goddard
Space Fight Center), today this giant cyclonic storm is only about half
as big as it was in the 1880s. Simon-Miller and three colleagues confirmed
the shrinkage during a careful comparison of historical records and
contemporary images from the Voyager, Galileo, and Cassini spacecraft.
She presented their results last month at a meeting of planetary scientists.

Astronomers have known since the early 1900s that the
Great Red Spot's longitudinal extent has been decreasing. Late in the
19th century the spot was nearly 35° wide, which corresponds to
about 40,000 kilometers, or more than three times Earth's diameter.
By 1979, when Voyagers 1 and 2 swept past, it had shrunk to 21°
(about 25,000 km), yet its latitudinal "height" remained essentially
unchanged, about 12,000 km from top to bottom.

Simon-Miller has discovered that the contraction seems
to have picked up steam since the Voyager visits: at its present rate
of shrinkage (0.19° in longitude per year), the spot will become
the "Great Red Circle" by the year 2040. However a perfectly round shape
is unlikely, she explains, because the strong, opposing jet streams
that confine the spot's northern and southern boundaries will always
distort it into an oval.

No one knows why the not-so-Great Red Spot has shrunk
— or, for that matter, why its color intensifies and fades over
time. One clue is that the winds around its circumference are whirling
70 percent faster now (about 700 km per hour) than they were in the
Voyager era. Some historical observations suggest that the Red Spot
grows and shrinks in a decades-long sequence. "I'm not sure the behavior
is really cyclical," Simon-Miller comments, "but I certainly would not
be surprised in the least if this shrinking trend slowed or reversed."

One possible explanation is that deep-seated bursts of
thunderstorm-like convection periodically energize the overlying cloud
layers, causing the spot to bloat in size, then gradually contract as
the turbulence subsides. "All of the weather on Jupiter seems to
have sporadic increases in activity," she notes, "so whatever
feeds the Great Red Spot likely will too."