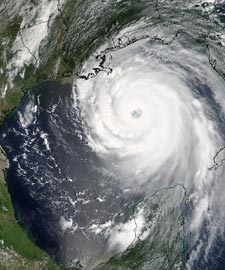 This satellite image taken on August 28th shows Hurricane Katrina spinning in the Gulf of Mexico, heading toward the Louisiana-Mississippi coastline.

Hurricane Katrina has come and gone, but its effects are still being felt in the Gulf Coast region, particularly in New Orleans. The sprawling metropolis in southeastern Louisiana between the Mississippi River and Lake Pontchartrain sustained extensive damage and heavy casualties when the Category 4 cyclone slammed the city with 145-mile-per-hour winds and a 20-foot storm surge.

"New Orleans and southeastern Louisiana are areas rich in astronomical heritage, including Pierre Baron Observatory, one of the first such facilities built in the United States," notes Aaron Price, a technical assistant at the American Association of Variable Star Observers (AAVSO) and one of the podcast producers at Slacker Astronomy. "Much astronomical infrastructure was lost there as a result of Katrina," he adds.

This prompted Price to act. In consultation with the Pontchartrain Astronomy Society (PAS), last October 11th he initiated a fundraising campaign called the Katrina Astronomy Fund. "The AAVSO will receive the funds and hold them in escrow until the drive is completed," he explains. "One hundred percent of the funds will be distributed as grants to educational and nonprofit institutions to replace astronomical equipment. The grants will be awarded by a committee consisting of the presidents of the PAS and the Astronomical League and the director of the AAVSO."

According to PAS president Michael D. Sandras, destruction to New Orleans facilities includes water damage and partial roof collapse at the Kenner Science Center as well as flooding of the public planetariums at the Louisiana Nature and Science Center and the Arabi Park Middle School."Authorities have not allowed us back to the buildings up to this time, two months after the hurricane hit," says Sandras.

"Many of the PAS members have lost their personal telescopes, and a few even lost their homes completely," he adds, "but physically, all of them are OK."

"We plan to run the campaign until the end of the year, with a tentative goal of $11,000," says Price. "Then in January 2006 we'll announce a call for grant applications and distribute the funds. All the grants awarded will be posted in the Slacker Astronomy Web site so donors can see where their money went. We'll also send a final e-mail report to all of them."

"We're very happy that Aaron had started this," says Sandras. "I'd like to thank everyone involved. We hope enough money will be raised to help local schools replace the books and telescopes they had lost, and to assist planetariums if they decide to rebuild. We've received word from the planetarium community that it is also willing to assist."

For more information, go to the Slacker Astronomy home page.