Statistically, every year roughly 1,400 meteorites of pebble size and larger fall somewhere on Earth's lands. But few of these are ever found — and even fewer (about 3%) are actually seen as they arrive. Because they're rare, these witnessed falls are especially prized both by scientists (because the stones are fresh and unweathered) and by meteorite collectors (they command higher prices). 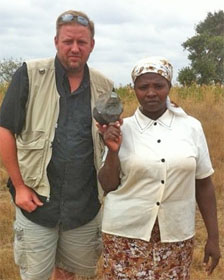 Meteorite hunter Michael Farmer poses with Rose Kamande, who found this 7.7-pound (3.5-kg) stone on July 17, 2011 — one day after meteorites fell from the sky in the villages surrounding Thika, Kenya.

As it happens, a bunch of meteorites fell from the sky over east-central Africa on July 16th, and only now are details of this extraterrestrial special delivery coming to light.

On that morning, residents in villages near Thika, Kenya, heard a loud explosion but didn't know what to make of the strange stones that fell around them. Local police were called to investigate a sizable one that dropped into a cornfield and carted it off for further study.

This is a desperately poor region, and it didn't take long for local villagers to realize that these plain-looking rocks might be worth something. Word of the event soon reached meteorite hunters, and within hours the chase was on.

Michael Farmer wasted no time traveling from his Tucson home to Kenya. By the morning of July 21st, just five days after the fall, he'd acquired more than 2 pounds of fragments. By then hundreds of locals had fanned out in the hope of finding some cosmic gold.

"Upon arriving at the fall location," he reports, "I met a guy who knew a girl who saw a stone land only 5 feet from her in a coffee field while working at 10:30 a.m. when the explosions rocked the sky." Farmer returned to Kenya again just a week later, this time accompanied by Florda dealer Greg Hupé. 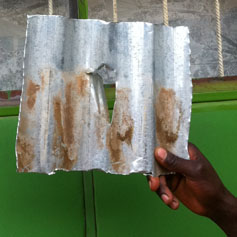 A 70-g "hammer" meteorite punched through the corrugated-metal roof of a housing complex in the village of Muguga, Kenya, on July 16, 2011.

All told, meteorites fell in four different villages. The fall will likely be known officially as Kihum Wiri, the place where the largest pieces were found. An analysis by researcher Laurence Garvie at Arizona State University indicates that these are ordinary chondrites, the most common meteorite type.

So far, more than 30 pounds (14 kg) have been scooped up. "I paid either for stones or for workers and supervisors to monitor the workers, money none of them could refuse," Farmer explains. "Most of them got a year or years of salary for stones worthless to them. It changed their lives."

I had no idea someone would travel from Arizona to the Kenyan outback on short notice for this kind of find. Very cool though.Interesting the shower happened during the day, we usually associate meteor[ites] with the night sky.

Because we can observe them only under dark conditions. But meteorites lack a clock, have no idea of time whatsoever!