When the science team for NASA's Kepler mission released data last month on nearly 1,200 candidate planets around other stars, it set off a feeding frenzy among dynamicists eager to test theories of solar-system formation. 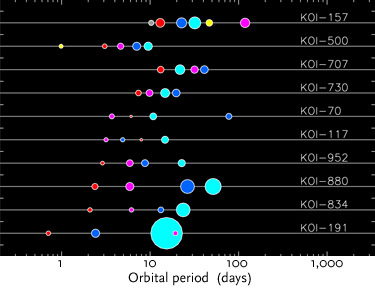 A depiction of Kepler's candidate systems having four to six planets. The dots on each line show the objects' relative sizes.

Especially tantalizing are the surprisingly common multiple-planet systems: 115 doubles, 45 triples, 8 quads, 1 quintuple, and 1 sextuple. Since Kepler detects planets as they transit their host stars, most of its candidates have very tight orbits, taking only days to a few weeks to complete each revolution.

Statistically, both Kepler and ground-based searches are finding that a star accompanied by planets has about a one-in-five chance of having more than one in its coterie. These multiple finds are welcomed because they are less likely to be false alarms and make it much easier to get a full picture of the systems' characteristics and dynamical evolution.

Now Jack Lissauer (NASA/Ames Research Center) and 25 coauthors have taken a closer look at Kepler's most interesting candidates. They note that in one remarkable four-planet system, around a star designated KOI-730 ("Kepler Object of Interest"), all four of KOI-730's worlds are locked in a dynamical dance: their orbital periods have a ratio of 8:6:4:3. In other words, the innermost planet completes eight orbits in the time it takes the outermost one to complete three.

Initially, the team believed the two middle planets shared the same orbit, making the ratio 6:4:4:3. However, "Further study of the light curve strongly supports the 8:6:4:3 period commensurability," Fabrycky notes. "That is interesting in itself, for other reasons, just no coorbital pair." 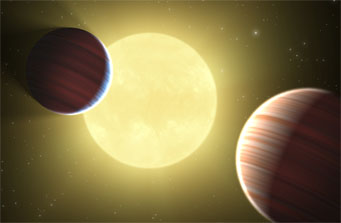 Crowded house: Kepler-9 is the first star system found to have multiple transiting planets. But the spacecraft has found more than 150 solar systems with at least two planets and many with three or more.

Such resonant relationships among planets have been predicted theoretically, but Kepler's trove of observations offers the first evidence that they exist. Even the cozy cohabitation of two planets in the same orbit has precedent of a sort — after all, thousands of Trojan asteroids share Jupiter's orbit. They hover around a pair of gravitational watering holes, called Lagrange points, that precede and trail the planet by 60°. Mars and Neptune also share their orbits with such asteroids, and Saturn has coorbiting satellites.

It's too bad that KOI-730 doesn't have a pair of cohabitating planets after all — if it had, this faraway system might have shed new light on where the Moon came from. Here's how:

There's near-complete scientific consensus that a Mars-size planet struck the infant Earth roughly 30 to 50 million years after the solar system's formation. The collision spurted out a white-hot jet of debris that soon cooled and coalesced into the Moon. To match the available geochemical evidence and to keep the collision velocity low (as suggested by computer simulations), this presumed impactor had been circling the Sun in an orbit very similar to Earth's, not only to match geochemical evidence but also to keep the collision velocity low.

One suggestion for the Moon's formation involves a planet that initially shared Earth's orbit but later struck our planet, yielding a splash ofdebris that coalesced to create the Moon.

In 2005 Princeton researchers Edward Belbruno and J. Richard Gott proposed that, once our solar system had taken shape, a sizable mass of planet-building leftovers remained at one of the Lagrangian points in Earth's orbit. These collected into a shadow planet, which some have dubbed Theia (the mythological mother of Selene), that collided with Earth after its orbit became unstable.

For a while, the KOI-730 system seemed to give new credibility to Belbruno and Gott's edgy hypothesis. Maybe, if Kepler lasts long enough, dynamicists will find a system with co-orbiting planets after all.

In the meantime, I think you'll find the analysis by Lissauer's team (which has been submitted to Astrophysical Journal) to be fairly digestible and a good tutorial to how Kepler is making its game-changing discoveries.

Time will tell if the Kepler observations can be confirmed with orbital parameters esablished and masses for these reports. In May 2007 there were 228 exoplanets reported with an average mass of 2.76 Jupiters. As of today in the exoplanet table, there are 538 with average mass of 3.01 Jupiters. 33 are super-earths with average mass of 5.85 earths. We need to be careful about presenting hype too like the Milky Way is filled with habitable earths because of Kepler stats.

I have liked Belbruno and Gott's hypothesis for a long time. And I think it's a general hypothesis; besides Theia, other Lagrangoids are Caloris Basin on Mercury, possibly Hellas Basin on Mars, Valhalla and Aesgard craters on Callisto, Saturn's moon Titan, Pluto, Eris, Haumea, and Neptune's strange, backwards orbiting moon Triton, and many more. I think every Lagrange (L4 and L5) point in the Solar system has had a sizable object form there.

The most illustrative I think are the coronae or "racetracks" on Uranus' moon Miranda. These touched down at the escape velocity for Miranda, which is about half the speed of sound through our own atmosphere. Thus instead of a blinding explosion, the Lagrangoids sort of crumbled, squeezing out the "chevron" feature between them.