A few weeks ago I got to tour a state-of-the-art observatory cleverly disguised as a Boeing 747-SP aircraft. I'd been covering the Stratospheric Observatory for Infrared Astronomy, or SOFIA, ever since NASA and the German Aerospace Center (DLR) started the project in the 1990s. 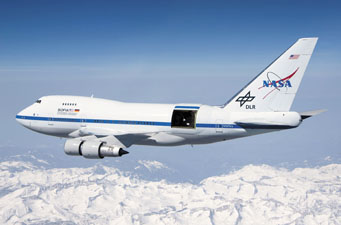 SOFIA, the Stratospheric Observatory for Infrared Astronomy, flies high above the snow-capped Sierra Nevada range during a test flight in April 2010. A gaping hole in its fuselage exposes the aircraft's 17-ton telescope.

Admittedly, I have a special interest in SOFIA. It's the successor to another flying telescope, the Kuiper Airborne Observatory, on which I'd flown a few times — most memorably when MIT astronomers used it to discover Pluto's atmosphere in 1988.

NASA retired the KAO in 1995, and a dedicated cadre of observers have been waiting for its replacement ever since. The concept is both simple and audacious: cut a big hole in the side of a plane, point a telescope out the hole, and observe the heavens from high altitude (above 99% of the water vapor that prevents infrared radiation from reaching the ground).

But SOFIA's had a rough time of it. After project managers bought the 747SP in 1997, three companies contracted to build the fuselage door went out of business in succession. With SOFIA's delivery date slipping by years and its budget tripling, NASA managers tried to end the project outright in 2006. But then someone read the fine print in the NASA-DLR contract: if either partner pulls out, the other gets the plane. That "gotcha," plus strong support from astronomers to carry on, saved SOFIA. 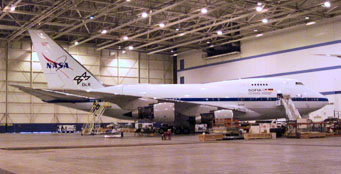 SOFIA is readied for flight at NASA's Dryden Aircraft Operations Facility in Palmdale, California. Click on the image for a larger view.

The aircraft is housed in an enormous hangar at NASA's Dryden Aircraft Operations Facility in Palmdale, California. Gleaming white and now completely refurbished, it's one of only 45 SPs ever built and still bears the name Clipper Lindbergh in its original Pan Am script. As I prepared to go aboard, I kept thinking, "How does anything 185 feet long, 66 feet tall, and weighing 150 tons manage to defy gravity just by having air rush around its wings?"

Once inside, I marveled at the comfort and roominess that future science teams will enjoy as they probe the infrared cosmos. The planes interior is now configured with ergonomically smart seats and sleek control panels — heck, there's even a trio of monitor-equipped seats for educators and journalists.

By contrast, flying on the KAO (a converted C-141A cargo craft) always seemed a tad dicey. The interior was primitive and noisy, and I'd had to train for high-altitude emergencies in order to get my tickets to ride. 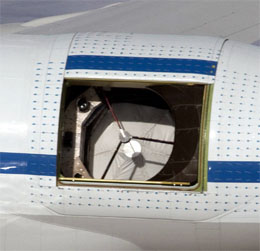 SOFIA's German-built telescope can be seen in its fuselage cavity during this test flight on December 18, 2009.

The business end of SOFIA, hidden behind a massive press bulkhead, is its German-built telescope. The 8.8-foot (2.7-m) f/1.3 primary has an effective aperture of 2.5 m because of optical overhead lost to its large secondary, image "chopping," and diffraction. The telescope looks out through a 16-by-23-foot (5-by-7-m) door cut into the aircraft's port side and can point in elevation between 20° and 60°. Unfortunately, our tour group didn't get to see the fuselage door open — something to see next time!

One of the biggest engineering challenges has been keeping vibrations to a minimum during the observing runs. Even in the rarefied air at 40,000 feet, stratospheric winds create all manner of resonant shaking as they rush past that big hole. "In the low-frequency range, there are no major problems," explains designer Hans Kärcher (MT Mechatronics). "But at higher frequencies the telescope behaves like the body of a violin and reacts to any excitement." 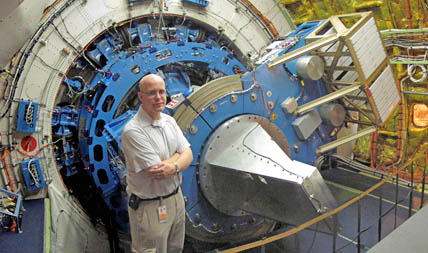 German engineer Stefan Teufel (University of Stuttgart) stands in front of the enormous bulkhead and bearing that separate the unpressurized cavity for SOFIA's telescope from the operations deck. The odd-shaped aluminum housing at the telescope's focus simulates the size and mass of one of seven instruments that will be used for observations. A large counterweight is at upper right.

Jutting out of the pressure bulkhead is the telescope's business end, an f/19.6 Nasymth focus where one of seven first-generation instruments will be mounted. "In principal," noted tour guide and chief scientist Eric Becklin (USRA), "astronomers could use SOFIA to observe from visible light to sub-millimeter wavelengths at the edge of the radio spectrum."

Becklin's story is one of dedication and perseverance: he performed some of the first infrared observations of planets and galaxies in the 1960s, and he led the team that submitted the original SOFIA proposal to NASA.

The first instruments in the observing queue are called FORCAST (Faint Object Infrared Camera for the SOFIA Telescope) and GREAT (German Receiver for Astronomy at Terahertz Frequencies). FORCAST got the call during the flying telescope's first-light run in May and will be used for a dozen short, science-readiness flights beginning later this month. Observations with GREAT, which arrived in Palmdale from Germany just a few days after my tour, should commence after the short-science flights.

NASA and DLR hope to keep the observatory flying for at least 20 years. "SOFIA really does have a unique niche that no other observatory will allow us to fill," explains Luke Keller (Ithaca College), a member of the FORCAST team. A feature article about SOFIA written by Keller and Jürgen Wolf appears in Sky & Telescope's October 2010 issue, and Keller had more thoughts to share during an interview with S&T's Robert Naeye. 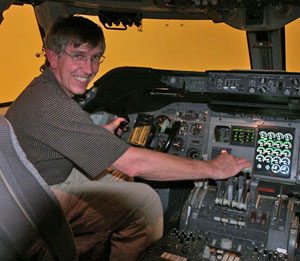 The author checks out the pilot's seat on the Boeing 747SP that has been transformed into a flying observatory.

Besides the project's USRA and DLR websites (the latter one auf Deutsch), you can also get a great technical overview of SOFIA in this paper by DLR's Alfred Krabbe. And to get a feel for SOFIA in flight, check the YouTube video clips here and here.

If all goes according to plan, astronomers will start riding SOFIA for routine science flights beginning next year. Sign me up!

The KAO and SOFIA are two prime examples of NASA's collection of complex and unique science platform aircraft. Please consider a follow-up article describing what it is like as a scientist to participate in an airborne astronomy mission and the complex technical dance required of the flight crew and scientists to prepare for a mission and to schedule and navigate the aircraft to get the telescope to the track to make the observation. A typical mission could require the aircraft to fly a curving path for hours across the Pacific Ocean.

Jbaloun, I recall an S&T article with some of that a few years ago.

Oops! That article was in the October 2010 issue! Brain cells are dying at a furious rate!

Thanks Richard. I will check the back issues for the article.