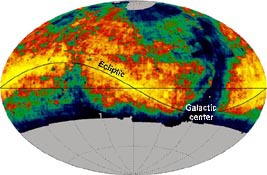 This projection of the celestial sphere shows the sky coverage recorded by the 1-meter LINEAR telescope over three years. Bright yellow corresponds to an accumulated depth (faintness limit) of magnitude 20.8. In star-dense areas of the Milky Way (dark swath at right) and near the local horizon the survey probed only to about magnitude 18.6.

Two decades ago, after carefully analyzing the Moon's
cratered face, the late Eugene Shoemaker estimated that nearly 2,000
asteroids at least 1 kilometer across must exist with some chance of
striking Earth. A collision of that magnitude, though rare, would have
disastrous consequences for life. Small, dedicated teams of astronomers
have been trying to track down these potentially hazardous asteroids
ever since, but lately there's been a growing consensus that Shoemaker
overestimated the impact threat. Recent studies have put the count of
1-km-wide near-Earth asteroids (NEAs) under 1,000, with one research
team suggesting that it could be as low as 700.

However, a new assessment, published in the November 23rd
issue of Science, has racheted the population estimate back up
to near 1,250. The higher count comes from J. Scott Stuart (MIT Lincoln
Laboratory), who analyzed nearly three years of NEA discoveries from
the prolific LINEAR telescope
near Socorro, New Mexico. Between March 1998 and February 2001, LINEAR
covered almost 500,000 square degrees of sky and discovered 657 near-Earth
asteroids — along with more than 110,000 new main-belt asteroids.
Stuart's assessment uses the 606 NEAs found on the best nights.

His computer simulations explored possible orbital characteristics
for NEAs and determined which of those orbits would have led to a discovery
by LINEAR (an acronym for Lincoln Near-Earth Asteroid Research). Besides
yielding a large population of 1-km NEAs, the resulting statistics argue
that many of them have orbits with inclinations near 23°. This
sizable tilt is shared by hundreds of objects belonging to the Phocaea
and Hungaria "families" in the inner asteroid belt.

Because LINEAR has found so many more NEAs than any other
search effort, asteroid specialists will likely consider Stuart's results
the most definitive — if they hold up to closer scrutiny.
Dynamicist Alan W. Harris (Jet Propulsion Laboratory) finds the new,
higher value very plausible, in part because NEAs continue to be discovered
at a fast clip. "I think it's interesting stuff," comments William Bottke
(Southwest Research Institute), whose has modeled
the NEA population theoretically. Bottke's results track Stuart's
in most respects but don't yield so many high-inclination objects, a
key discrepancy.

In 1992 a NASA-sponsored report backed a plan to locate
90 percent of all kilometer-size NEAs within a decade. After a slow
start, that search is well under way, with about 550 of these large
Earth-crossers now catalogued.
But if the total population is well above 1,000, as Stuart suggests,
then most of them await discovery. Reaching the 90-percent threshold
could take LINEAR another 40 years, he estimates, because of diminishing
returns over time. Harris thinks that's overly pessimistic, but he agrees
that asteroid-hunters have decades of work yet ahead of them.