All the things in the universe that we can easily see — stars, nebulae, and so on — amount to less than 1% of all the matter and energy that's known to be out there. 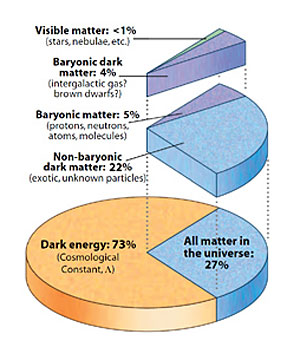 The basic ingredients of the universe; everything else is detail. Normal, or baryonic matter — the building blocks of atoms and molecules — accounts for 4.6% of all matter and energy. A lot of even this went unseen until recently.

"Dark matter" and "dark energy" account for 95.4% of everything, judging by many lines of converging evidence (see the June Sky & Telescope, page 14). But that still leaves 4.6% of everything as “ordinary” matter: material made of protons, neutrons, and electrons, the stuff of atoms. Until recent years, astronomers could only tally up about half as much ordinary matter as cosmologists said there ought to be, judging from the state of the universe soon after the Big Bang.

Now the mystery seems solved. In recent years astronomers had already found signs that the missing ordinary matter indeed exists, as a thin, elusive gas between galaxies known as the “warm-hot intergalactic medium,” or WHIM.

The evidence for WHIM has now turned firmer. Its signature showed up (weakly) in a spectrum of X-rays arriving from a distant source. Absorption lines revealing WHIM were imprinted on the X-rays where they passed through the Fornax Wall, an enormous structure of thousands of galaxies in the vast web of galaxy strings, walls, and clusters pervading the cosmos. 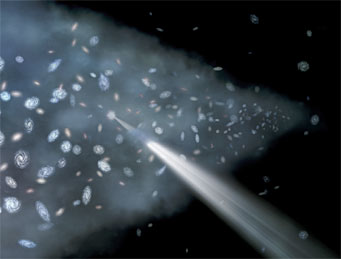 In this artist's illustration, X-rays from a background source (narrow beam) pass through the Fornax Wall of galaxies and thin intergalactic gas (blue fuzz) on their way to Earth.

The spectral signature matches both the predicted amount and temperature (about 1 million kelvins) of the elusive intergalactic gas. One reason it has gone unseen is that it is very sparse: there's only about 6 hydrogen atoms' worth per cubic meter, compared with the 1 million atoms per cubic meter that's typical of the interstellar gas within galaxies.

As mysterious as ever is the nonbaryonic dark matter: the 22% of the cosmic inventory that is matter but is not made of protons, neutrons, and electrons.

Here's a NASA science feature on the new finding. And if you really want to dive in deep, here's the researchers' paper.

For what it's worth, I'm getting rejected by your link to the researchers' paper ....

the message is below (anyone else getting through?) - take care - fascinating post - Rod

If you are using the PDF Plug-in, it has many bugs and is forbidden here due to problems it causes at the server end. You must confirm that you have disabled it before access can be restored.