When NASA's Lunar Crater Observation and Sensing Satellite (LCROSS) and its empty Centaur rocket slammed into the inky darkness of Cabeus crater on October 9th, a worldwide audience watched for some much-anticipated lunar fireworks.

But as space spectacles go, the LCROSS impacts were a bust. No incandescent flash lit up the monitors in mission control, nor did billowing plumes of dust stream upward into the sunlight and into view of telescopes back on Earth. Astronomers sifted through flat-lined observations from Hubble, Keck, Gemini, Subaru, and other giant eyes, looking in vain for any trace of the event. The poor showing frustrated legions of backyard Moonwatchers as well. 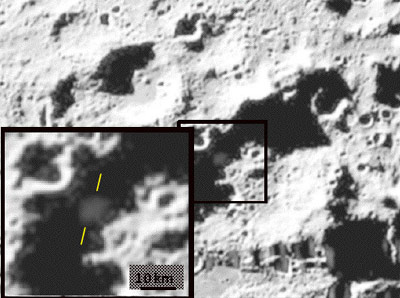 The impact plume kicked up by a Centaur rocket body appears between the yellow ticks in this image taken by the shepherding probe following behind.

One problem was that telescopic views of the impact sites were blocked by a high ridge along the Earth-facing rim of Cabeus. The plume had to rise at least a mile (1½ to 2 km) before it emerged into sunlight and Earth view — and by then, apparently, it had become too diffuse to see. The only positive detections from Earth involved a pulse of sodium added to the Moon's tenuous exosphere.

Nothing, however, blocked the view of the nine cameras and spectrometers aboard the LCROSS shepherd probe, which trailed the rocket by about 400 miles (600 km). In addition, the Lunar Reconnaissance Orbiter had a front-row seat as it passed horizontally just 48 miles (76 km) overhead. Those instruments detected a flash when the Centaur hit, the rising plume of hot debris that followed (recorded in the image above), and the crater left behind. In that sense the mission was a smashing success.

The rocket's impact gouged a pit about 70 to 100 feet (20 to 30 m) across, in line with expectations. A splash of debris extends another few hundred feet (80 to 100 m) or more beyond the crater rim. But LCROSS project scientist Anthony Colaprete concedes that the incandescent flash created by the Centaur's impact was only a third as bright as predicted, a dim blip that his team struggled to find amid the underexposed camera frames. (Maybe they should have consulted amateur occultation timers, who routinely record faint events on the Moon's brilliant edges.) 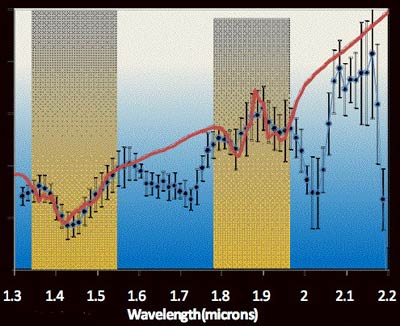 Not until today, after the team had pored over the results for several weeks, was Colaprete finally able to announce that water vapor was present in the towering plume of hot dust and gas. "Multiple lines of evidence show water was present in both [the] high-angle vapor plume and the ejecta curtain created by the LCROSS Centaur impact."

An infrared spectrometer on LCROSS recorded absorption bands of water vapor at wavelengths of 1.4 and 1.85 microns (see spectrum at right). Another spectrometer registered ultraviolet emission at 309 nanometers, a telltale sign of hydroxyl (OH) radicals created when water molecules break apart in ultraviolet sunlight (see spectrum below).

So there is water on the Moon — and "we didn't find just a little bit, we found a significant amount," Colaprete said. He estimates that the part of the plume in the instrument's field of view contained about 100 kg of water vapor, or about 25 gallons if it were liquid. He would not yet give an estimate yet of what fraction of the lunar soil that amounts to; the answer to that question will depend on how much soil was kicked up and how much was outside the field of view. 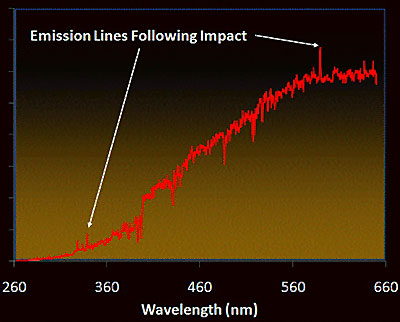 Another instrument recorded the spectrum of the plume's infrared glow as seen against the black lunar sky. Marked here are two emission lines; the one at right indicates the hydroxyl molecule (OH), a breakdown product of water.

By comparison, other observations — including early results from a Russian-built experiment aboard LRO, the Lunar Neutron Exploration Detector, that senses where hydrogen (in water, presumably) is concentrated in the lunar landscape — suggested that the near-surface rubble inside Cabeus might hold 1% water or more by weight.

Water's spectral fingerprints weren't the only ones found by LCROSS. Apparently the blossoming debris cloud had other interesting "flavorings" mixed in. Mission scientists are still trying to make the best fits to the observed spectrum, but candidate compounds include carbon dioxide (CO2), carbon monoxide (CO), and even organic molecules like methane (CH4), methanol (CH3OH), and ethanol (C2H5OH). "The possibility of contamination from the Centaur was ruled out," Colaprete notes.

Geochemists had a hunch that the crash might dredge up a strange brew. They'd been tipped off back in mid-September by results from Diviner, an LRO instrument designed to map temperatures across the lunar surface. Its sensors found that the polar regions are far colder than expected, as low as 35K (–397°F) in some spots. As improbable as it is remarkable, the shadowed floors within Cabeus and its neighbors are the most frigid places so far measured anywhere in the solar system. That should make them efficient "cold traps" for volatiles of all kinds.

So a whole host of compounds could be in the mix. "It's lot more complicated than we really anticipated," Colaprete admits. "The eureka moment was seeing the OH line, but we haven't had time to enjoy it — because we're so interested in everything else that's in there."

"We're really not done yet," echoed Michael Wargo, chief lunar scientist at NASA Headquarters. He refered to the Moon's permanent polar shadowlands as "the dusty attic of the solar system," where all sorts of volatiles may have collected for the last 1 or 2 billion years, providing a unique record of solar-system events. Team members pledged to announce other results as they gain confidence in the ongoing analyses. They plan to present some additional findings at science meetings next week and in early December.

Great data, great discovery. All that hard work was worth it. Who's gonna call the LCROSS Mission a "dud", now? Would they dare?

Wait a sec... didn't S&T just send out a survey letting subscribers vote on their choice of an upcoming cover, and one of the options had a headline something like: LCROSS: NO WATER FOUND --? What was that about? I certainly hope you don't end up running *that* cover...