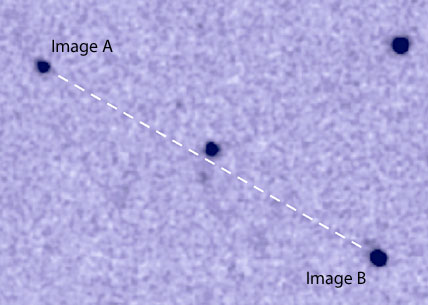 This near-infrared image taken at the 6.5-meter Magellan Telescope in Chile shows the new record holder for the widest gravitationally lensed quasar, 2QZ J1435+0008. Image A and Image B are different views of the same quasar, whose light has been warped by the gravity of a foreground cluster of galaxies. The object in the center is probably the brightest galaxy in the lensing cluster. The two quasar images are separated by 33 arcseconds.

Astronomy is a record-breaking science. When a very wide gravitationally lensed quasar was announced in late 2003, breaking the separation record set by a similar object discovered in 1979, Joachim Wambsganss (University of Potsdam, Germany) wrote in the journal Nature: "It’s a safe bet that it won’t be another 24 years until this quasar record is broken." Little did he know that the record would be shattered within three weeks.

The record holder since 1979 was the famous Double Quasar in Ursa Major. Its twin components are separate images of the same one object, split into two by the gravity of a closer (and much fainter) galaxy along our line of sight. Albert Einstein predicted such gravitational lenses in 1936. More than just curiosities, gravitational lenses help astronomers map the distribution of mass, including dark matter.

About 80 gravitationally lensed quasars are currently known, but the record separation of the Double Quasar (6.3 arcseconds) held until last December 18th, when a team led by Naohisa Inada and Masamune Oguri (University of Tokyo) announced the discovery of the quadruple-lensed quasar SDSS J1004+4112 in Leo Minor. The largest separation between two of its components is 14.6 arcseconds, smashing the old record. 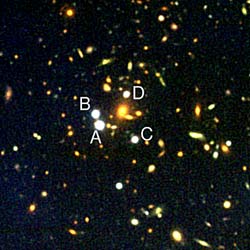 Using data from the Sloan Digital Sky Survey, a team discovered a quadruple-lensed quasar. The team followed up the discovery with this more detailed image from the 8.2-meter Subaru Telescope. The quasar’s light has been gravitationally split into four images (the four white dots in the center), two of which are separated by 14.6 arcseconds. The quasar is about 10 billion light-years away; the foreground lensing cluster is 6.2 billion light-years distant.

Inada’s team found the quadruply imaged object by sifting through 29,500 quasars in the Sloan Digital Sky Survey. Using the Keck I telescope on Mauna Kea, in Hawaii, the team found that the four images have essentially the same spectrum. A deep image taken with the Japanese 8.2-meter Subaru Telescope, also on Mauna Kea, even showed the intervening cluster of galaxies that acts as the gravitational lens.

Meanwhile, a similar search in data from the Australian 2dF survey led to the discovery of an even wider pair (2QZ J1435+0008 in Virgo), with a separation of 33 arcseconds. Follow-up observations with 6.5-meter telescopes in the United States and in Chile proved that the pair is a single-lensed quasar at 11 billion light-years. Discovery team member Andrew R. Marble (University of Arizona) announced the result on January 8th at the 203rd meeting of the American Astronomical Society in Atlanta. A galaxy halfway between the two quasar images is probably the brightest member of the lensing cluster.

Such large-separation lensed quasars are predicted by the popular cold dark matter (CDM) theory of how the universe gained its galaxies and clusters. In this scenario, slow-moving (cold) dark matter accounts for most of the universe’s mass and dominates the evolution of large-scale structure. "Astronomers have been looking for [wide lenses] for 25 years," says Marble. Many more may await discovery, but, he adds, if their number becomes too large, they may start to pose a problem for the CDM model: "It would indicate that dark matter is more strongly concentrated in cluster centers than the model predicts."

Although the quadruple quasar held the record for only three weeks, Marble thinks the latest record holder may cling to its title a lot longer. "This could be the widest-lensed quasar there is," he says.