Life and Death of FUSE

It’s always sad to report that a hard-working space-science mission is over. But that’s indeed the situation with NASA’s Far Ultraviolet Spectroscopic Explorer. FUSE was forced to wrap up its observing in August after 8 very productive years in space. 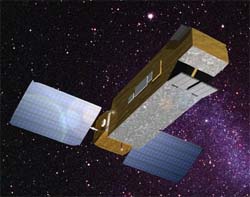 Launched in 1999, the Far Ultraviolet Spectroscopic Explorer circles Earth at an altitude of about 470 miles.

Problems with the four reaction wheels (used to point the spacecraft) had interrupted observing several times in recent years, and on May 8th the last of those wheels failed. Flight controllers at the Johns Hopkins University in Baltimore managed to restart the wheel and resume the observing program on June 12th — but on July 12th the wheel failed again, this time for good.

After a month of fruitless attempts to revive any of the reaction wheels, the FUSE team accepted defeat. The far-ultraviolet spectrograph and the spacecraft itself are otherwise in good working order. But to get starlight into the spectrograph's narrow entrance slit, FUSE must be able to point precisely at a target. Since it can no longer do that, NASA’s Science Mission Directorate has decided to terminate the mission.

FUSE was launched on June 24, 1999, and made the most detailed ultraviolet studies of stars to date. It discovered hot winds flowing outward from cool stars and recorded hot plasma in the halo of our galaxy.

Moreover, FUSE addressed a key cosmological question by measuring the deuterium abundance in various parts of the galaxy. It established that some nearby interstellar regions exhibit low values of deuterium because it’s locked up in dust grains, and that the total abundance of deuterium is higher than what theoretical studies of the galaxy's chemical evolution had predicted.