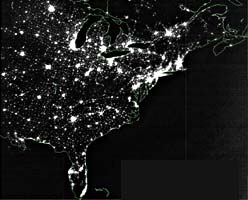 Billions of watts of wasted electricity stream continually into space as light from cities and towns in eastern North America. This 1994 satellite image is from the Defense Meteorological Satellite Program.

If the fall 2002 meeting of the International Dark-Sky Association (IDA) proved anything, it's that astronomers have lost control of the light-pollution issue — and that's a good thing. Like the spoiling of our air and water, the loss of nighttime darkness is becoming a serious concern not only to astronomers but also to health-care professionals, zoologists, lighting engineers, politicians, and the public.

Some 175 activists gathered in Boston and Cambridge, Massachusetts, last Friday and Saturday for the IDA's first national meeting outside its headquarters city of Tucson, Arizona. They learned that poorly designed light fixtures do more than just blot out our view of the starry sky. They also disrupt our circadian rhythms, cause accidents on roadways, confuse migrating birds and other wildlife, and waste billions of dollars in energy costs. 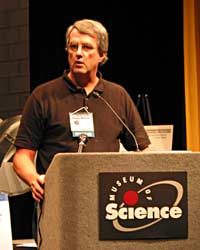 Addressing the affects of runaway nighttime lighting on marine birds, Chesapeake Bay biologist Johnny Noles said, 'There is enough cause for concern to push light pollution into the same arena as chemical pollution.'

The most notable feature of the conference was the diversity of fields represented among the speakers and attendees. Astronomers (both amateur and professional) were probably the largest group, but collectively they appeared to be in the minority — just as they now account for less than half of the IDA's nearly 10,000 members. Others at the meeting included lighting engineers, city planners, medical researchers, and wildlife conservationists. Over two days of spirited discussion, they shared their knowledge and experience and forged new alliances for the future.

Typical of the presentations made at the meeting was that of epidemiologist Richard Stevens (University of Connecticut). "Evidence is mounting," he said, "that the elevated risk of breast cancer in industrialized societies is due, at least in part, to the use of electric lights at night." The connection, the subject of increasing research, appears to involve hormones and other components of our immune systems produced by our bodies only when the brain's visual cortex relays signals from the retina that it is dark.

Just as we needn't shut down every factory to keep our air and water clean, we needn't shut off every light to maintain our health and enjoy starry skies. All that's required, asserts IDA founder and executive director David Crawford, is to use the right amount of light, where and when it's needed. Several manufacturers displayed new, shielded luminaires that shine all their light on the ground, spilling none into the sky or into neighbors' windows; these designs eliminate glare and allow the use of lower-wattage bulbs to achieve the desired level of illumination. "There are no losers" when good lighting is used instead of bad lighting, said Crawford. "We all win."