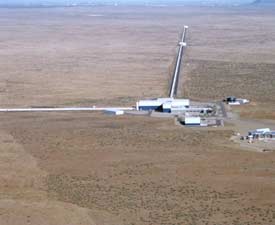 The LIGO site in Hanford, Washington (seen above), and its sister site in Louisiana, are operational and are currently in search of gravitational waves.

On September 9th, the $360-million Laser Interferometer Gravitational-wave Observatory, or LIGO, completed its first scientific observing session. All three of LIGO's interferometers (two in Hanford, Washington, and one in Livingston, Louisiana) operated in tandem for 2 ½ weeks — as they will have to do in order to distinguish cosmic gravitational waves from terrestrial tremors or electronic noise (S&T: October 2000, page 40). Data from this milestone session will be scrutinized for possible signs of black-hole mergers, asymmetric supernovae, or other abruptly moving massive objects, says Deputy Director Gary H. Sanders (Caltech), with the findings hopefully seeing print by year's end.

For relativity aficionados and fiscal watchdogs alike, the news from LIGO's operational debut is mixed. On the upside, LIGO's many systems — from powerful lasers to 4-kilometer-long vacuum tanks to ultrafast data recorders — all are working. Instrumental noise, which can drown out possible cosmic signals, has been reduced by a factor of 3,000 since operations began two years ago. On the downside, noise remains roughly 100 times "louder" than anticipated, and logging operations in the nearby forest frequently rattle LIGO's Louisiana interferometer out of optical alignment during daylight hours. Teams are working nonstop to mitigate both problems before a second science run begins in the coming months.