Using two instruments aboard the Herschel space telescope, observers have mapped the abundance of water in the stratosphere of Jupiter — 95% of which was delivered by Comet Shoemaker-Levy 9 in July 1994. 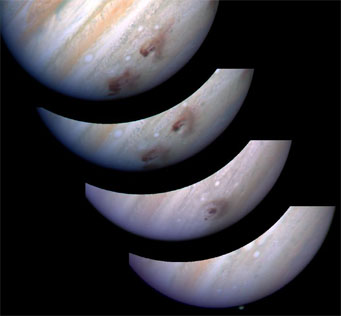 This mosaic shows how the G impact site of Comet Shoemaker-Levy 9 evolved over time. Lower right to upper left: 5 minutes after impact, 1½ hours later, 3 days later (the L impact site is to G's right), and 5 days later. Click here for a larger version.

How time flies! It's been more than 20 years since the discovery of Comet Shoemaker-Levy 9 on film images (yes, film) taken the night of March 24, 1993. Then, after much anticipation, a score of its fragments crashed into Jupiter 16 months later, with spectacular consequences. Comets Halley or Hale-Bopp might be more famous, but at no time ever have more of the world's great telescopes been trained on the same object as they were during S-L 9's demise.

We'll never know the true size of the comet's intact nucleus. Estimates varied from 1½ to 10 km across. Yet even at the small end of this size range, a typical fragment delivered 1027 ergs of energy — the explosive equivalent of nearly 25,000 megatons of TNT. These crashes occurred high in Jupiter's stratosphere, creating a series of dark, ominous "powder burns" that faded away in a few weeks.

At the time telescopic observers recorded spectroscopic evidence for water (and lots of other compounds) in those fireballs, and researchers have assumed that any water found in the stratosphere of Jupiter in the years since must have come from the comet. But direct proof was lacking — until now. 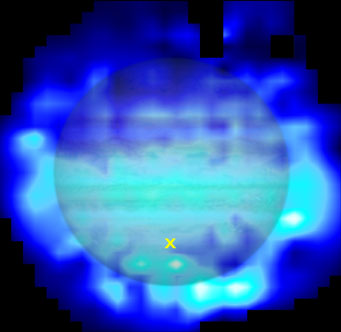 Blue hues map the abundance of water vapor in the upper atmosphere of Jupiter (shown for reference). The water map was derived from far-infrared observations made by the Herschel space telescope in 2009-10. X indicates the latitude (44°S) at which fragments of Comet Shoemaker-Levy 9 struck the planet in 1994.

In the April 23rd issue of Astronomy & Astrophysics, a team led by Thibault Cavalié (Laboratory of Astrophysics, Bordeaux, France) shows not only that water vapor exists in the stratosphere of Jupiter but also that almost all of it is in the planet's southern hemisphere, where the comet hit.

These observations, made in 2009 and 2010, utilized two instruments on the European Space Agency's Herschel telescope, which ceased operation just a few days ago when it ran out of cryogenic coolant. Herschel's big 3.5-m mirror provided both enough sensitivity at 66 and 180 microns (the far-infrared wavelengths of strong water emission lines) and enough spatial resolution (about 13 arcseconds) to map the water abundance in a 5-by-5-pixel grid across the planet's disk.

The Herschel observations, together with heat maps provided by NASA's Infrared Telescope Facility on Mauna Kea, showed the researchers that the Jovian stratosphere was 20° to 30°F (10° to 15°C) warmer than it would be if completely dry. One question is whether the stratospheric warming results from the gentle, continuous infall of interplanetary dust particles, which would be warmed by sunlight as they linger high up. Cavalié and his colleagues believe IDPs create some of the infrared emission but cannot explain it all.

Further, a continuously supplied source would migrate to lower depths, yet most of the emission is too high up, at pressures less than 2 millibars. And while the amount of water is roughly constant across the southern hemisphere, the emission gradually weakens northward until it's less than half as strong. It's not simply that Jupiter's bottom half is hotter — there's just more water down there. As the researchers note, "At least 95% of the observed water comes from the SL9 comet and subsequent (photo)-chemistry in Jupiter’s stratosphere according to our models, as of today.

The colored arcs map the abundance of hydrogen cyanide (HCN) in the upper atmosphere of Jupiter, as measured in 2007 with the Submillimeter Array atop Mauna Kea in Hawaii.

Taken together, they conclude, these observations offer "clear evidence that a recent comet … is the principal source of water in Jupiter. What we observe today is a remnant of the oxygen delivery by the comet at 44°S in July 1994." You'll find more background about these results in this ESA press release.

Interestingly, water isn't the only "smoking gun" left by the comet's crash. Observers led by Mark Gurwell (Harvard-Smithsonian Center for Astrophysics) mapped the abundance of hydrogen cyanide (HCN) using an array of microwave dishes atop Mauna Kea. They too found an excess in the southern hemisphere and a lack of HCN close to the poles — another good match to where Comet Shoemaker-Levy 9 would have injected itself.

If I recall correctly, this was at the beginning of the time that amateurs could access or create digital media. Also apply image processing, histograms and various manipulation to enhance various aspects of the images. Someplace or another, I've still got the images of this event (not taken by me). However crude they may seem today, they are part of our heritage.

The Hubble imagr of the "string of pearls" is one of my fovorites. Second favorites of this event is the bruises inflicted on Jupiter, spectacular images. 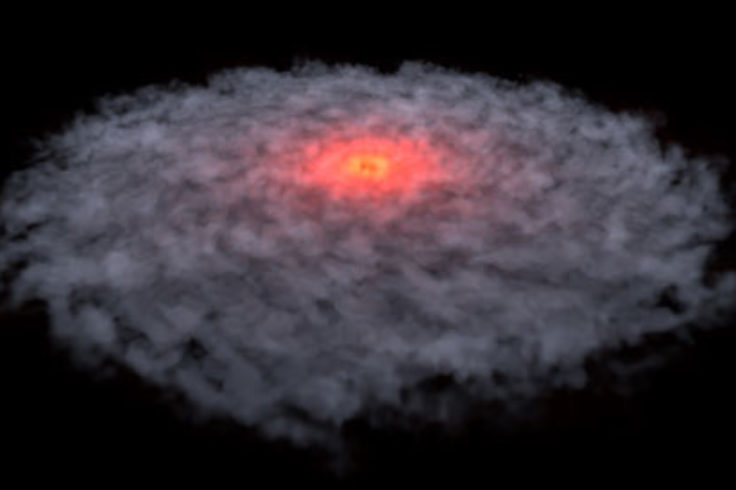