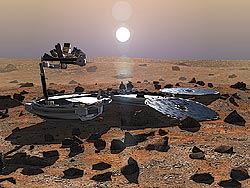 The clamshell-like Beagle 2 should have landed on Mars at 2:54 Universal Time on December 25th (9:54 p.m. Eastern time December 24th). No confirming signal has been received so far.

Many scientists in England stayed up through Christmas Eve, not awaiting a visit from a red-suited man bearing gifts, but for the landing of their ambitious mission to the red planet, Mars. Alas, after the appointed hour passed, anticipation turned into uncertainty as the European Space Agency's Beagle 2 lander's faint signal was not detected. It still has not been heard from.

The first opportunity to hear from Beagle 2 came at about 1:30 a.m. Eastern Standard Time (6:30 Universal Time) December 25th when NASA's Mars Odyssey spacecraft would have relayed a signal from the lander's 5-watt transmitter. About 16 hours later, the 76-meter Lovell Radio Telescope at Jodrell Bank Observatory listened for a direct signal, but nothing was received.

"We are working under the assumption that Beagle 2 is on the surface of Mars and for some reason cannot communicate to us," says Mark Sims, Beagle 2 mission manager.

In contrast to the lander, Mars Express, the spacecraft that carried Beagle 2, successfully entered into orbit around Mars. It will be moved into a polar orbit on December 30th. The spacecraft will then become the primary communications relay for Beagle 2. There are preprogrammed contacts between Mars Express and Beagle 2 on January 6th, 12th, 13th, and 17th.

Mars Express is packed with mapping instruments, including a camera that will survey the entire Martian globe in stereo to a resolution of 10 meters. Selected areas will be imaged in more detail. A spectrometer will determine mineral composition and ground-penetrating radar will hunt for subsurface water ice to a depth of a few kilometers.

"There's clearly still a good opportunity to make contact with Beagle 2 with Mars Express when [the orbiter] comes into action, and that has to be the first priority at this point," wrote Lord Sainsbury, United Kingdom Minister for Science and Innovation in a prepared statement.

Flight engineers note that Beagle 2 may have missed its planned landing site. If so, the Lovell telescope may still be able to pinpoint its location so that Mars Odyssey can better aim its receiving antenna. (The giant radio telescope can only listen for Beagle; it can't reply). There is also a remote chance that the lander touched down inside or on the slopes of a kilometer-wide crater recently identified within the landing region.

Mars Express and Beagle 2 lead the way in a new wave of Martian exploration. NASA's twin Mars Exploration Rovers, Spirit and Opportunity, are scheduled to land in January.

This story was originally published on December 26, 2003.