Wow, there's nothing like an asteroid slamming into Earth to get professional and amateur astronomers whipped into a frenzy. 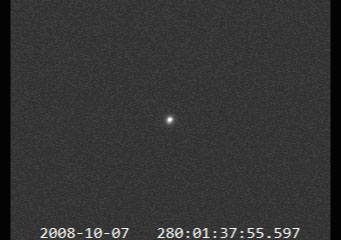 By tracking on the little asteroid 2008 TC3 before its impact, astronomers at the Clay Center observatory could watch it race across the sky. Click above to see a 300-Kb moving image.

That's what happened on Monday morning when Maine skywatcher Bill Gray noticed something unique about a small asteroid discovered the previous night by Richard Kowalski and others at an observatory in Arizona. Gray's electronic posting to other asteroid aficionados began, "It looks as if Mt. Lemmon has found the first object . . . with a near certainty of hitting the earth."

Never mind that the object (designated 2008 TC3), was no bigger than a car, so in all likelihood it would explode harmlessly in the atmosphere with the kinetic-energy equivalent of 1,000 or 2,000 tons of TNT. That's no big deal as impacts go — objects of that size and energy hit somewhere on Earth every month or so.

Even so, the world's astronomers kicked into high gear, amassing 570 observations between the space rock's discovery until it slipped into Earth's shadow about an hour before impact. All that in just 19 hours! My email in box was lit up like a Christmas tree! As the observations piled up, dynamicists at JPL boldly announced that the mini-asteroid would slam into Earth at 2:46 Universal Time on October 7th. Ground zero was somewhere over northern Sudan — and at night! For anyone in that part of northeast Africa, it was going to be quite a show.

So what happened? The impact did occur as predicted, but so far there's no confirmation that anyone on the ground saw it. S&T contributing editor Johnny Horne, who's a photographer for the Fayetteville Observer, received a negative report from Khartoum, Sudan's capital. Khartoum and Mecca are the closest significant cities to the impact site, but each is still roughly 300 miles away. This part of the world is exceedingly arid and sparsely populated — people living there have far bigger issues on their minds.

Nor have we received any confirmed sightings from countless observers in Europe who went out in the hopes of seeing the flash.

However, Peter Brown, a meteor researcher at the University of West Ontario, reports that the airburst was recorded by at least one infrasound sensor operated by the International Monitoring System, whose primary purpose is detecting surreptitious nuclear tests. Brown confirms that the impact energy ranged from 1,100 to 2,100 tons of TNT.

Visually, the most compelling evidence comes from nighttime visual and infrared images acquired by the European Space Agency's Meteosat 8 weather satellite. Zdenek Charvat (Czech Hydrometeorological Institute), who first noticed the flash in the Meteosat images, reports that the spot is apparent in all 12 spectral channels, which span wavelengths from 0.5 to 14 microns).

But the satellite's scanning imager takes about 5 minutes to record each frame, so there's no way to extract the exact time of the spot's appearance. But the flare seems to be in the right spot, corresponding to longitude 32.37° east and latitude +20.89° and an altitude of 14 to 20 miles (22 to 30 km). One frame hints at an apparent trail about 2 miles long.

This sequence, which combines images taken every 4 seconds, records the asteroid's dramatic changes in brightness that signified its tumbling motion.

Meanwhile, telescopic observations show that 2008 TC3 was gyrating wildly before it hit. According to Czech asteroid specialist Petr Pravec, it was "definitely a tumbler." His analysis reveals two distinct periods of 49 and 98 seconds long. One is probably due to rotation and the other to spin-axis precession, but he can't tell yet which is which. But he notes that this ranks (or ranked!) as one of the three fastest-spinning asteroids known.

"It would be good to mention the role of Marek Kozubal and Ron Dantowitz at the Clay Center Observatory" Pravec told me. "Their photometric observations of the asteroid have been unique, and without them we wouldn't know much about its rotation."

I don't think we've heard the last word on this little party-crasher. After all, the U.S. Department of Defense has "assets" well suited to recording explosions in that part of the world. And from time to time the DoD's scientists have shared what they know with their civilian counterparts. So stay tuned for further developments!

You can read our original announcement about this asteroid here.

I think the credit for noting the tumbling and possible periods goes to Petr Pravec.

You're absolutely right, and I've corrected the story. Peter Jenniskens forwarded a message about the tumbling, and I picked up his name mistakenly. I hope Petr will forgive me! — Kelly Beatty

Interesting orbit (see the JPL page noted in the article above). Doesn't go very far inside Earth's orbit, or outside Mars. Any possibility this might actually have been a Mars mission upper stage? Has the orbit been correlated with positions of Earth and Mars for the past few circuits?

Mike Shepard is right, the credit should go to Petr Pravec of the Astronomical Institute, Czech Republic.

More so, Alan Harris of Space Science Institute reviewed the data before Petr and also stated that it was definitely a tumbler in off-line messages to the Clay Center observers. It was Alan's detrended data (to remove the effects of changing geometry) that Petr used for his specialized analysis. Both Alan and I, using single period Fourier analysis, found the 48 and 96 s periods but it took Petr's work to establish that they were not simply aliases of one another but separate periods due to rotation and precesion of the pole (the tumbling).

Regardless of the details, a BIG kudos goes to the Clay Center for obtaining the excellent data set that allowed such analysis.

Did anyboby get a picture of it? when did this happen and where at. Hope it wasnt visible here because I missed a pretty good show if it was really visible!

However small, there's always the possibility that the Martians launched this ill-fated mission, and their lander was destroyed in our atmosphere due to an error in the conversion between units of measurement...

Early in Kelly Beatty's blog it's stated that "in all likelihood (the asteroid) would explode harmlessly in the atmosphere with the kinetic-energy equivalent of 1 or 2 tons of TNT. Later in the blog it states "(Peter) Brown confirms that the impact energy ranged from 1.1 to 2.1 kilotons of TNT." Which is it, tons or kilotons?

I am a 7/8th grade science teacher and I love the Sky and Telescope weekly e-mail. I would like to make in inference linking the October 7th asteroid and the problems experienced on Quantas Airline flight 72 on the same day. In my research was not able to pinpoint the time of the problem, but QF72 leaves Singapore at 9 A.M.WST (1:00 GMT) with a destination of Perth, Australia. (Approx. 5 hour flight) During this flight the plane experienced severe turbulence. Passangers were thrown to the ceiling of the plane, and on some occasions experienced weightlessness. There were many injuries. The plane needed to make an emergency landing.

Could the asteroid send a compression wave that could have effected this airplane. The asteroid blew up at 2:46 a.m. GMT which is 10:46 a.m. WST.

Julie, I doubt very much that there was any relationship between the two events. The aircraft was many thousands of km away from the asteroid's entry. It would have taken hours for any shock wave to reach the aircraft, and such a powerful shock wave would certainly have been noticed at points in-between (as well as obliterating much of East Africa). Only if observations and calculations were very much in error (unlikely) would there be a chance that the asteroid's impact was actually near Australia. The flight crew would certainly have noticed the flash if it was. I would just say that the turbulence that the Quantas flight ran into was just normal severe turbulence that aircraft encounter from time to time. It's a good reminder to keep your seat belt fastened whenever you're in your seat!

My god parents were on the Quantas flight and it was nothing to do with an asteroid Julie. It may not have been turbulance but rather a mechanical fault (don't know what the initial report says). My godfather would have noticed any such activity.

I know I am about to sound ingnorant but I have an observation and a question. I have often wondered about the comet that impacted Jupiter. With the rotation of Jupiter and the amount of debri that was spewed out by the inpact, I wonder how long it would take some of it to reach earth if the trajectory was aimed at earth. Which it did look like from the photographs that could be the case. Does anyone have the answer to that?

Alignment of a Star and a Planet