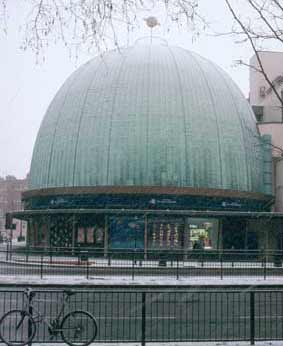 The London Planetarium will soon replace its popular 10-minute program, 'Journey to Infinity,' with shows about movie and sports personalities.

The stars at one of central London's well-known tourist attractions will go dark for good this July. Madame Tussauds waxworks, the owner of the London Planetarium, has decided to close the facility as the company shifts its focus from science education to entertainment. The planetarium (renamed the Auditorium) will soon replace its shows with programs about celebrities.

Built in the 1950s, the London Planetarium seats around 330 under its green 18-meter (60-foot) dome. Although Madame Tussauds had cut the screenings of its shows to just one 10-minute program called "Journey to Infinity," the planetarium has remained very popular with local schoolchildren and their teachers.

"The London Planetarium has inspired generations of schoolchildren," notes Robin Scagell, vice president of Britain's Society for Popular Astronomy. "Many parents can still remember their first visit to it when they were young. To lose the planetarium now would be a tragedy."

The Royal Observatory's new, state-of-the-art 120-seat planetarium in Greenwich Park, about 30 minutes from downtown London by boat or rail, is currently under construction and won't be completed until early 2007. "The only other planetarium of any size within striking distance of London," says Scagell, "is the South Downs Planetarium near Chichester on the South Coast, about 60 miles from the capital, which is certainly not readily accessible unless you happen to be in the area."

"I don't think the Madame Tussauds management wants to sell or lease out the London Planetarium," he adds. "It's a valuable bit of real estate in a very expensive part of the world, and I'm sure they want to hang on to it. The dome itself is not a listed building, that is, not protected as being of historic or architectural value, but I doubt that they would want to pull it down just yet."