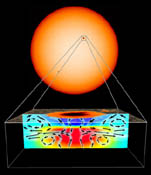 The Michelson Doppler Imager aboard the Solar and Heliospheric Observatory measures the sound speed and motions of gas under and around a sunspot. Red is hot gas; blue is cooler, denser gas. The newly discovered convective cycle around and under sunspots, indicated here with arrows, is what holds a spot together for weeks at a time. Courtesy NASA/ESA.

Using the Solar
and Heliospheric Observatory (SOHO), astronomers have made the first three-dimensional map of the material circulating in and under a sunspot. From their observations, they conclude that sunspots are cool, self-perpetuating, shallow blotches that draw in surrounding material to remain stable, while diverting heat from below out to the sides.

Since they were discovered by Galileo and others in 1611, sunspots have been mysterious oddities. The dark, cool spots are regions of intense magnetic field that hold solar gas in their grips, cutting it off from convection (boiling) that would normally carry heat to the surface. The gas thus cools and darkens.

But sunspots shouldn't be stable, and most certainly shouldn't survive for weeks at a time. Parallel magnetic field lines, just like refrigerator magnets, naturally repel each other. Thus the collection of field lines in a sunspot should spread apart and dissolve quickly.

Using the Michelson Doppler Imager aboard SOHO, Junwei Zhao, Alexander G. Kosovichev Stanford University), and Thomas L. Duvall, Jr. (NASA/Goddard Space Flight Center) measured the speed of sound around and under a sunspot in 1998. Sound waves travel faster through hot gas than through cooler gas. The team also mapped the complex bulk motions around the spot. The temperatures and gas motions showed that solar blemishes act like drains, drawing in surrounding material at 4,000 kilometers per hour and driving in below the Sun's surface; as the gas cools, it becomes denser and sinks. Field lines that would normally dissipate are held together by the force of the inflowing material.

Meanwhile, convection continues from below. However, the hot, deep internal gas cannot rise and break through the cool, magnetic region. According to Kosovichev, it collects underneath, compresses the spot from below, and spreads around the outside to the surface. The spot studied in 1998 only had a depth of about 4,000 km, less than one percent of the solar radius.

Gas flow from underneath sunspots also helps explain the seemingly paradoxical fact that the Sun is slightly warmer and brighter when covered with pox. Despite the cool blemishes, the heat still gets out efficiently.