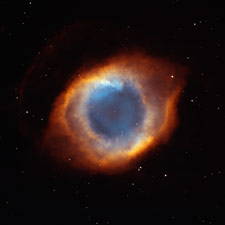 This stunning image of the Helix Nebula in Aquarius is a composite. Much of this scene, which is nearly ½° wide, is a mosaic by the Hubble Space Telescope's Advanced Camera for Surveys. The outer edges that Hubble missed are filled in by images from the National Science Foundation's 0.9-meter telescope at Kitt Peak National Observatory in Arizona. Deep inside the nebula are numerous, comet-like blobs of gas and dust. High-resolution images are available for download from the Space Telescope Science Institute.

Take one fierce meteor shower and one fragile space telescope; add a ground-based wide-field camera, a few astronomers, and plenty of suggestions from the astronomical community, and you get one impressive picture.

With predictions that the 2002 Leonid meteor shower would blossom to a storm, the Hubble Space Telescope needed protection. Controllers slewed its delicate optics away from the incoming meteors, stopping in Aquarius with NGC 7293, the Helix Nebula, in its sights. "Can't do anything else with the Hubble, what do you do?" asked Margaret Meixner, (Space Telescope Science Institute). As head of the Hubble Helix Nebula Team, she solicited suggestions from people who had studied the Helix to create an observing plan. "Being pointed that way, we had the time to go deeper with a more sensitive camera."

Since Hubble already photographed the Helix Nebula in 1996, some believed that imaging it again would not be time well spent. The 2002 Leonid storm was the perfect chance to prove them wrong.

Using the new Advanced Camera for Surveys (ACS), Hubble spent nine orbits photographing the nebula in nine overlapping frames. These images were then blended with views from the Mosaic Camera at Kitt Peak to produce this wide but highly detailed scene.

The Helix Nebula is large for a planetary nebula, 3 light-years across, and relatively close to Earth, 650 light-years away. It appears as large as half the diameter of the full Moon. As suspected, the new ACS view shows that the nebula is really a cylinder pointed toward Earth. It's this angle that gives it the appearance of a bubble. 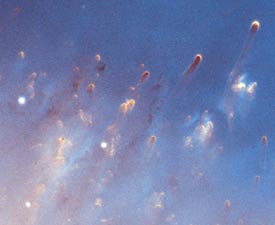 The tadpole-shaped dust blobs within the Helix Nebula are likely the eroded remnants of a dust and gas collar around the nebula's central white dwarf.

The fine detail of the ACS images show the nebula's long-known "cometary blobs" excellently. The tailed features were most likely formed when dust and gas that had already escaped the dying star were eroded by a forceful, hot stellar wind. Astronomers now suspect that these blobs may be remnants of a disk, like a collar, around the central white dwarf.

Analysis of the new image is still in progress, says Meixner, but the team does have some definite goals. The main difference between this image and the one from 1996, she explains, "is that almost the entire nebula has been mapped out." With this map in hand, scientists can perform closer studies of the knots, noting how they change around the nebula, as well as judge their three-dimension structure.