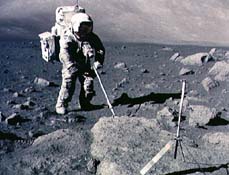 Samples of lunar soil collected by Apollo 17 astronauts in 1972 continue to yield new findings; they contain an isotope of beryllium that is providing clues to the workings of the Sun's atmosphere. Eugene A. Cernan and Harrison H. Schmitt (pictured here) returned to Earth with more than 100 kilograms of lunar material.

The topmost layer of the Moon's surface is coated with
trace materials from the Sun, and these are providing some insight into
processes in the solar atmosphere. Unlike the Earth, the Moon isn't
protected by a particle-deflecting magnetosphere and atmosphere. Thus,
the lunar surface is subject to the full force of the solar wind and
high-energy cosmic rays from elsewhere in the galaxy.

Kunihiko Nishiizumi (University of California, Berkeley)
and Marc W. Caffee (Lawrence Livermore National Laboratory) examined
specimens of lunar soil collected by Apollo
17 astronauts Eugene A. Cernan and Harrison H. Schmitt. The Moon-walkers
collected one sample within a centimeter of the surface and dug out
the other from a 25-cm-deep trench. Nishiizumi and Caffee explain in
the October 12, 2001, issue of Science
how they used several baths of acid to liberate radioactive isotopes
of beryllium, aluminum, and chlorine from the soil particles and then
measured the quantities of the atoms. In the case of beryllium-10 —
which is unstable because it has an extra, sixth neutron in its nucleus
— they identified about 15 percent more in the shallow soil sample
than would be expected if the atoms came from cosmic rays.

Furthermore, beryllium-10 has a half-life of 1.5 million
years, far younger than the Moon, so there must be a source of continual
replenishment. Nishiizumi and Caffee conclude that the beryllium is
being carried to the Moon from the Sun. Energetic protons bombarding
carbon, nitrogen, and oxygen atoms in the solar atmosphere create the
isotope. The solar wind then carries it away.

The researchers note that the quantity of beryllium-10
suggests that the atoms are flung out soon after they are formed. Calculations
revealed that if they mixed more deeply into the Sun's surface layers
first, there would be only about a ten-thousandth as much beryllium
in the lunar soil. Consequently, much less of the solar atmosphere seems
to churn back into deeper layers within the Sun than solar researchers
have believed.