Astronomers have long known that the Andromeda Galaxy is headed our way. Now they've concluded that it most likely will collide with the Milky Way head-on — with dramatic consequences.

For rock-'em, sock'em cosmic action, you can't beat the collision of two galaxies. It's a scene that has played out countless times since the beginning of the universe. Our own Milky Way, for example, isn't the serene, stately pinwheel it appears to be. Over the eons it has gobbled up many close associates. In fact, right now the Milky Way is devouring a small system called the Sagittarius Dwarf Elliptical Galaxy, or SagDEG for short. 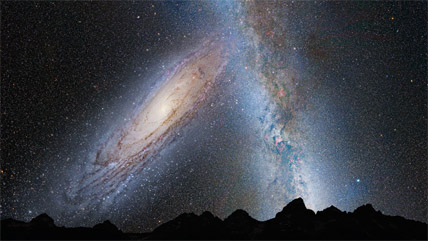 Some 4¾ billion years from now, the Andromeda Galaxy (M31) will loom large in the night sky as its fateful collision with our Milky Way nears.

But it turns out that these skirmishes are merely warm-ups for the upcoming main event: a head-on collision of the Milky Way with the equally massive Andromeda Galaxy (Messier 31) in about 4 billion years.

Astronomers have long known that M31 is relatively nearby, just 2½ million light-years distant, and moving toward us at about 250,000 miles (400,000 km) per hour. That's because both of these massive spiral systems are members of the Local Group, a gravitationally bound collection of three biggies (these two and M33), along with about 50 much smaller dwarf galaxies that include the two Magellanic Clouds. I liken the large trio as "anchor stores" in a medium-size intergalactic mall.

So is the Andromeda Galaxy destined to collide with the Milky Way? No one could say for sure because the answer depended on side-to-side movement across the sky, what astronomers term proper motion. A lateral shift of 60 miles (100 km) per second one way or the other makes all the difference between a near miss, glancing blow, or head-on collision. Yet this amount of proper motion corresponds to a positional change of just 27 millionths of an arcsecond per year — far beyond the ability of ground-based telescope's to measure, even over decades-long baselines.

Difficult — but not impossible — for the Hubble Space Telescope and the unprecedented positional precision made possible by its latest-generation instruments.

A series of three papers, submitted to the Astrophysical Journal last week, reveals how astronomers finally puzzled it all out. First, a trio led by Sangmo Tony Sohn (Space Telescope Science Institute) used dedicated HST observations over several years to measure proper motions in three locations within M31. The average of these turns out to be about 125 miles (200 km) per second. In the second paper, a team led by Roeland van der Marel (also at STScI) modeled the total mass of the Local Group, to see what other gravitational influences might be in play. 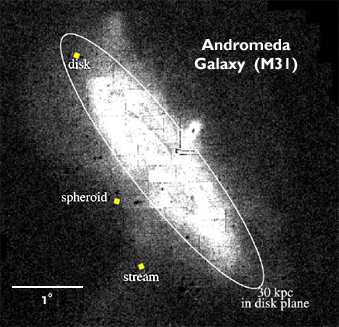 Three small boxes denote locations targeted by astronomers to determine the proper motion (lateral movement) of the Andromeda Galaxy. The underlying gray shading represents the density of stars in the galaxy's disk.

Finally, van der Marel and four colleagues simulated the possible outcomes when these titans of the Local Group finally meet. "Most likely, the Milky Way and M31 will merge first," they write, with a 41% chance that they'll strike head-on (their centers no farther than 80,000 light-years apart). In that case, M33 will settle into an orbit around them. However, they add that there's a small chance (9%) that M33 will strike the Milky Way first — or it might get flung from the Local Group altogether (7%).

The first round of this intergalactic smashup won't happen for another 4 billion years, and another 2 billion years will pass before the two (or three) systems merge into a single giant elliptical galaxy. Although our Sun will still be around then, still a billion years shy of its red-giant phase, life on Earth (as we know it) will not.

An STScI press release notes that the hundreds of billions of stars inside each galaxy will be jostled into new orbits during the encounter but won't collide with each other — there's just too much empty space between them. The simulations also suggest that our solar system will likely end up much farther from the galactic core than it is today.

Measuring the proper motion of M31 is a remarkable achievement. It also repesents a new chapter in an old astronomical story.

In the early 1920s, Adriaan van Maanen measured proper motions in the "spiral nebulae." The angular velocities he found were so high that the nebulae couldn't possibly be external to our own galaxy.

Of course, these measurements were incorrect and are now regarded as one of the bigger blunders in astronomical history. After Edwin Hubble determined galactic distances, it became obvious that the proper motions of the spiral nebulae must be very small -- so small that it's amazing that this measurement has finally been accomplished.

Interesting reading here. I have seen other reports in the past on M31 and Milky Way colliding some 4 billion years in the future. Always risky to predict the future. Another view of the future can be found in Revelation 21-22.

Rod, one benefit of predicting the future 4 billion years hence is that there's little risk of being proven wrong during your own lifetime. When prophesying that "the end is near," it's always a good idea to leave yourself adequately ambiguous wiggle room.

Nice comments all. Yes, Bob Sills, it is a very impressive accomplishment to have measured the proper motion of the Andromeda Galaxy. And Rod, I appreciate your referring to the vastly different outcome for the earth mentioned in the final two chapters of the Bible. (For a little more on the happy future of the earth and of mankind upon it see Psalms 37:9-11,29,34, 104:5, Ecclesiastes 1:4 & Matthew 5:5) And Anthony, I do in fact believe that the end is near, but I agree with you that it’s unwise to make predictions as to when. The end that I’m convinced is coming however will not be an “end of life as we know it” type of event, as shown by the above verses. I hope to survive this coming end, and then live on for a long, long time. I can't agree with all the pessimistic talk that everyone has just seen the last Venus transit of our lifetimes, or even that “life as we know it” has only a billion more years on this planet due to a warming sun. Due to the laws of physics it is very likely that the sun will in fact warm, but I have faith that God has a plan for dealing with this problem. I think it’s very interesting timing that the predicted merger with Andromeda is forecasted to begin about a half a billion years prior to the sun’s predicted red giant phase. When this “collision” occurs it will be more of a creative, rather than a destructive occurance, because a burst of star and planet formation will take place as gas and dust from the two galaxies merge. No one on earth knows, but perhaps the coming merger with Andromeda will provide a solution to the red giant sun problem for the earth and it’s living payload. I know that probably the great majority who read this comment must think I’m certifiably crazy, but be that as it may, I wanted to share my more hopeful point of view. I look forward to enjoying astronomy for, literally, forever.

In rereading Kelley’s article as well as my above post I see that the big galactic merger is expected to occur, not .5 billion years before the sun goes all red-giant on us, but a full billion years before the big bloat up. Even better than I first thought. A lot can happen in 10^9 years. How many times does the sun orbit the center of the Milky Way each billion years? About 4 or 5 times, I think. Lots of chances for close encounters with younger stars. Also note the optimistic projections for the sun’s new location after the merger; instead of being drawn inward toward the dangerous core of the new mega galaxy, “the simulations also suggest that our solar system will likely end up much farther from the galactic core than it is today.” More good news, and not just for us. I would infer that this would mean that the odds are good for most star systems in the habitable zones of any spiral galaxies undergoing galactic mergers. Seems like a superbly thought out Grand Design to me.

can this make earth people enterfear in communication?

There is a new substantiated hypothesis that the universe is now expanding and contracting at the same time (here we go: nasha-vselennaia.ru/?p=10056) .

We think that some galaxies are moving away from us and some are approaching. The Andromeda is approaching to us with high speed (almost with the speed of light), but it falls into the black hole, at the center of which is our galaxy, the Milky Way.

Because of the great gravitational force between our galaxy and Andromeda, there is gravitational compression of time around us. That is, the time passes slowly around us, and it seems to us that Andromeda is approaching us slowly.

The closer it comes to us, the more will be the gravitational force and the time will slow down. We would think that the Andromeda is braking, slowing its approach, but it is actually approaching us almost at the speed of light.

We have nothing to be afraid of. According to our time, it needs billions of years to collide with our galaxy. If we really live in four-dimensional space, there is nothing surprising.