One astronomical concept that I still have a hard time wrapping my head around is a neutron star. You know, those ultradense stellar freaks that pack up to twice the Sun's mass into a sort of giant atomic nucleus just 20 miles across? A teaspoon of this stuff weighs in at 10 million tons. Makes me fat just thinking about it. 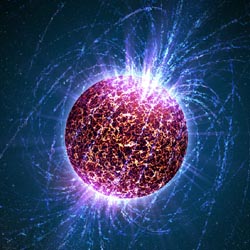 Neutron stars are commonplace because they're a frequent outcome of supernovas, and so astronomers often find them associated with a supernova remnant or with another star (cannibalism in binary systems often leads to self-destructive behavior). In fact, until recently astronomers knew of only seven neutron stars that exist in isolation. These came to be known collectively as the Magnificent Seven, after the movie of the same name.

Well, make room for a magnificent eighth. Astronomers from McGill University and Penn State have identified an isolated neutron star in Ursa Major. They been suspicious about it for some time, because it glows brightly in X-rays but lacks the usual radio pulsations associated with neutron stars. After scrutiny by NASA's Swift satellite last year, the object was reexamined by the Chandra Observatory.

The research team has decided to name it Calvera, after the villain in the movie. "A bit of an inside joke on our part," quips co-discoverer Derek Fox.

According to Robert Rutledge, the team leader, no one knows why it should be bright in X-rays but radio quiet. In any case, Calvera is probably quite close to us, no more than 250 to 1,000 light-years away. This would make it among the closest neutron stars known — and perhaps the closest.

Check out Penn State's press release for more information about this unusual object.