Astronomers searching for forming planets have a new place to look. Even the thin disks around brown dwarfs are capable of forming grains large enough that, one day, they could potentially coalesce into a rocky planet. 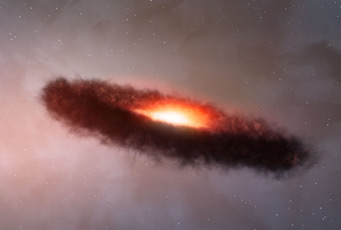 An artist imagines what the debris disk surrounding a brown dwarf might look like.The tiny grains in this disk, called dust by astronomers, are similar in size to fine soot and sand.

Planets — including Earth — are the leftovers of star formation. As a proto-stellar cloud collapses, most of the gas and dust folds into the infant star. What’s left distributes into a disk and continues to coalesce, forming asteroids comets, and planets.

While debris disks have been observed around many young stars, the exact details of how planets form in these disks is an open question. Now, with new observations from one of the most sensitive telescopes on the planet, astronomers have added yet another clue to the planet-formation mystery.

Astronomer Luca Ricci (California Institute of Technology) led an international team that recently released results stemming from observations of the brown dwarf Rho-Oph 102. They observed the failed star using the combined power of 15 to 16 radio antennas, part of the Atacama Large Millimeter/submillimeter Array (ALMA). Located high in the Chilean desert, ALMA’s dishes will number 66 when the telescope finishes construction in 2013. But already the collection of 7-meter and 12-meter antennas makes up one of the most sensitive telescopes in the world. ALMA has been conducting science observations since the end of 2011. 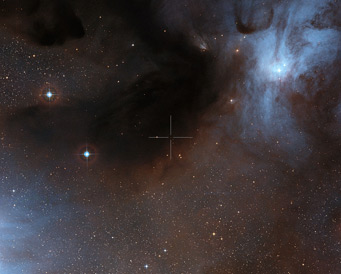 The brown dwarf Rho-Oph 102, named for the star-forming region it calls home, Rho Ophiuchi, was one of the first objects chosen to be observed by ALMA because it showed signs of harboring a thin disk of dust and gas. Brown dwarfs are far too massive — in this case 60 times the mass of Jupiter — to be called planets, yet unlike their heavier stellar cousins, they lack the mass needed to sustain fusion in their cores. Rho-Oph 102’s small mass led astronomers to believe its debris disk would be similarly puny, too sparse to ever form planets.

The new ALMA observations dispute this idea, suggesting instead that planet formation around brown dwarfs might even be common. Ricci and his team observed the disk of the brown dwarf at two different wavelengths and compared the relative brightness as a way of measuring the size of the particles in the cold, outer part of the disk. To Ricci’s surprise, the particles around Rho-Oph 102 were millimeter-sized, much larger than expected. Though they’re tiny now, these grains are the building blocks that could eventually form rocky planets.

In other words, even the smallest stars and brown dwarfs might be capable of hosting rocky planets like Earth. Since low-mass stars are the most common type of star, rocky planets may be even more common than previously thought. And figuring out just how all those planets formed will definitely keep astronomers on this planet busy for quite some time.

It’s not surprising at all that brown dwarfs should also have planets. Consider all the large planets in our solar system. Every one of them has its own mini solar system of moons.

Interesting report here. I don't think we would want to grow up on an exoplanet orbiting a brown dwarf 🙂 Here is something I uncovered about brown dwarfs earlier this year.

"Although they are relatively frequent as free-floating objects, brown dwarfs are scarcely found as companions to solar-type stars. The paucity of brown dwarfs in close-orbits first noticed by radial velocity surveys has led to the concept of the "brown dwarf desert". We will show that this desert concerns in fact close companions with masses larger than about 3 Jupiter masses orbiting G-type stars. On the other hand, photometric surveys have shown that in fact F-type stars do possess close-in, massive companions. We will show that this is explained by the loss of an initial population of close-in massive giant planets and brown dwarfs due to tidal interactions: Because stars orbit less rapidly than their close-in companions, the tide raised on the star causes the companion to loose angular momentum and spiral in. The effect is much more pronounced around G-type stars because of a larger magnetic braking and because of increased dissipation, probably by internal gravity waves..." Ref. NASA ADS Abstract,The Brown Dwarf Desert: A Tale of Stars Engulfing their Massive Close-in Companions,http://adsabs.harvard.edu/abs/2012AAS...22012103G

True Rod, and I don’t think anything will be found to be “growing up” on brown dwarf planets either. But these objects are interesting and informative and someday some of them might prove to be useful for fuel and raw materials if interstellar travel ever becomes viable. It took me a while to see the relevance of the report you sited Rod, since this S&T story is about BDs that form out by themselves and the paper you sited is about BD’s in orbiting other stars. Could the point you’re making be that it will be rare to find an earthlike planet in orbit of any BDs, even if it happens to also be orbiting a heat providing star?

John B. your article was fascinating, and as good articles do they make you want to find out even more, but when I clicked on the first link I got the message “Whoops! You’ve slewed to a target that’s below the horizon.” Yes, I know that Chile is below my horizon, as it will be for almost everyone! The fact that Chile is not beyond the electronic horizon was demonstrated by the second link, in which I found the interesting fact that the ALMA image of Rho-Oph 102 was taken using only one fourth of the dishes that the finished array will have, and it only took 1 hour of observing time. Excellent progress, more amazement to come I am sure.

Bruce to answer your question about finding earthlike planets in orbit around brown dwarfs, yes rare would be one description. The report here pointed out that explaining the details of planet formation from dust disks is difficult - "While debris disks have been observed around many young stars, the exact details of how planets form in these disks is an open question." In fact S&T published a past report on brown dwarf formation that shows similar issues in explaining their formation - Misfit Stars, Sky & Telescope 124(1):22-27, 2012. So Bruce, we live on an earthlike planet but explaining how Earth formed and is habitable remains elusive, whether in our solar system or around brown dwarfs 🙂

Rod, you and I often have friendly astronomical debates, which largely boll down to questions about timing, rather than cause. I cannot find anything in the above post to disagree with, which reminds me of Psalms 133:1, which I wish could be truer in our case. May you have peace. But, getting back to the subject at hand, this article is interesting not just for what it is saying about BDs but I think more importantly about what it is saying about the formation of rocky planets in general. How do you get light objects like sand sized grains in a proto stellar or now even in a proto BD’s disk to clump together? Until such particles are firmly bound together collisions would often be disruptive rather than constructive. It’s easy to see how a proto planet that’s already grown massive enough to attract its neighbors grows, but how does a sand grain grow up to be a proto-planet? This story about BD planets is suggesting that this process can even happen when there is much less material to begin with in the collapsing dust cloud.

I suspect that a uniformly distributed disk of particles would spontaneously begin to accumulate into bands of high and low density due first to statistical fluctuations to raise the density slightly in one region followed by resonance interactions between that and other regions. This will continue until the density is high enough for proto-planets to begin growing. I haven't read this or done the numerical experiment, so take it as a WAG.

Yes Joe, resonances would surely take place once one or more large planets have formed, but in a small systems such as ones forming around isolated BD the key question remains; how do light grains clump together and grow without being disrupted? Clearly they do, but how? Also btw, please excuse my ignorance Joe, but what does WAG stand for?
(Joe S., your mathematical post on the “Making Mini-Oort Clouds” article was great, but sadly it’s already scrolled off the page. IMO you have restored the Oort Cloud to its rightful place in the solar system.)

I suspect S&T ate my last post because the definition of WAG contains a vulgarism [WAG = wild a** guess, let's see if that gets through the e-censor). I'll try to reproduce my comments: First, thanks for your comments on the Oort cloud - I'm happy to have contributed something useful. I hope you saw my last post under that article concerning the migration of the gas giants causing the Late Heavy Bombardment and throwing many comets out into the Oort cloud. As for the protoplanet question, the picture i'm trying to paint is one where resonances in the dust cloud itself, before there are any protoplanet seeds, might cause bands of high particle density. And dust particles in the same orbit can collide with low relative velocities. Enough such low-v collisions could lead to more growth in size than disruption.

No Joe, I hadn’t seen your last post on the Oort cloud tread, but I have now. (For any others interested if you’re a registered user you can login and then enter into the search keyword box “Making Mini Oort Clouds” to find the last comments on the thread.)
Well Joe, WAGs notwithstanding, you ARE making some nice contributions here. On this planet formation question I think you’re on the right track too, if not on resonances, then at least on the idea of dense bands of dust being able to coalesce because of low relative velocities. I wonder if other forces besides just gravitational attraction (which is practically non-existent between light particles) are at work in the formation of planetesimals. For instance, could electrostatic charge and/or compression from stellar winds be playing a roll here too? But with a brown dwarf proto system these non gravitational forces might be weak or absent. That’s why this BD planet formation finding could be significant. Making planets seems to be something that the universe does very, very well. Although relatively few of them may prove to be earthlike, it is beginning to look like the universe is a humongous planet factory.