Ask a planetary scientist to list the most amazing but as-yet-unexplained things in the solar system, and the rings of Saturn will be right up there. 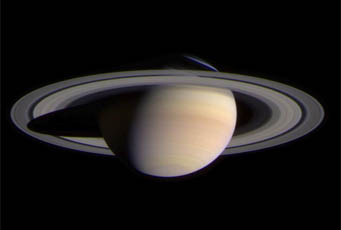 Even from 43 million miles away, Saturn was resplendent when the approaching Cassini spacecraft took this snapshot on February 9, 2004. Click here for a larger view.

Sure, Galileo Galilei observed them in 1610 (though he didn't know what he was seeing), and Christiaan Huygens deduced the rings' true nature in 1655. But it wasn't until NASA's Voyagers and, especially, Cassini got "up close and personal" with the rings that we started to appreciate just how complicated they are.

In fact, despite four centuries of study, astronomers still don't know how or when these iconic bands came to exist.

Most any textbook will offer two possible causes: Either an early satellite strayed too close to Saturn and was ripped to shreds by tidal forces, or those same tides kept a primordial disk of matter from assembling into moons. A really good textbook might include a third option, proposed about 20 years ago, that a massive comet (perhaps a Centaur object) ventured too close to the just-forming Saturn and shed enough icy material to create a ring system.

None of these ideas have wowed planetary theorists, and for good reason. Six years of close scrutiny by Cassini have confirmed what ground-based infrared observers suspected as long ago as 1990: the rings are almost entirely water ice. In fact, after allowing for the meteoritic contamination they've picked up over time, they likely were pure ice when they formed — and there's the rub. Any sacrificial satellite or primordial building blocks would likely have been a roughly 50:50 mix of ice and rock. That's the composition of most satellites not only circling Saturn but throughout the outer solar system as well.

So how can you pulverize a moon without adding lots of rocky rubble to the rings? The answer, says Robin Canup (Southwest Research Institute), is to take it apart very, very carefully. In a paper appearing in the December 16th Nature (but released online yesterday), Canup puts forth a new scenario that she's been perfecting over the past year. The key, she says, is understanding what happened to Saturn's moons after they formed — and realizing that (unlike Jupiter) Saturn has only one large satellite, Titan. 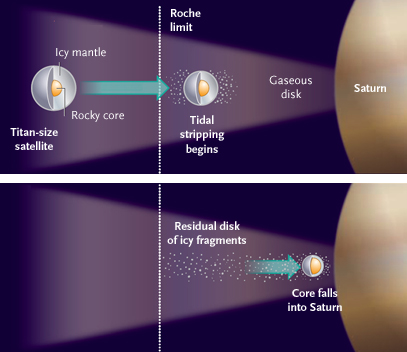 Robin Canup's model for forming Saturn's rings. A massive satellite, differentiated into a rocky core and icy mantle, is forced inward by gas drag. Once inside the Roche limit, tidal forces disrupt the mantle (much of which remains in orbit) but not the core (which falls into Saturn).

Just as the giant planets must have been dragged toward the Sun by interactions with the solar nebula, Canup posits that any big moons created in the primordial disk of matter around Saturn would have spiraled inward and been gobbled up. The last of these, roughly Titan's size, would have gotten so hot from tidal stresses that its water ice melted, causing any rocky matter to sink to the core. As it continued to migrate inward, the doomed moon crossed the threshold (known as the Roche limit) inside of which the planet's tidal forces began tearing it to pieces.

Here's the genius of Canup's model: the Roche limit for disrupting a rocky body is much closer to a planet that the one for ice (because rock is much denser). So while the moon's icy exterior was literally falling apart, the rocky core remained intact and eventually fell into Saturn. All the chips-off-the-block left behind, orbiting close to the planet, would have been nearly pure ice.

Moreover, there would have been a lot of them — totaling perhaps 10 billion billion tons, a thousand times more mass than estimates for what the ring system holds now. "It would have been a vastly more massive initial ring," she admits. But that's not a deal-breaker: since rings like to spread out, over time lots of this stuff would have slid inward and into Saturn, and lots of it would have migrated outward — beyond the Roche limit — where it could clump together into stable satellites built like enormous ice cubes. The inner moon Tethys, for example, is 660 miles (1,066 km) across, yet it has a bulk density of only 0.97 g/cm3.

Other planetary scientists like what they see. As French ring specialists Aurélien Crida and Sébastien Charnoz conclude in an accompanying commentary, "Canup's model offers, for the first time, a convincing starting point for a consistent theory of the origin of Saturn's rings and satellites."

If she's right, the Saturnian ring system has been around for nearly 4½ billion years. Yet the ongoing gravitational tugs of war between the rings and little moons like Atlas argue that the rings formed much more recently, something like 500 million years ago. Moreover, meteorites should have dirtied up the rings' once-pure ice in as little as 100 million years — unless the system is far more massive than has been assumed.

With more time and a little luck, Cassini should be able both to estimate how much meteoritic grit is soiling the rings and to determine the mass of the ring system to within a few percent — two important results that I suspect Canup is eager to see.

Nice article, Kelly. The purity of the ice in Saturn's rings was already hinted at by ground-based observations in the 70s of the high radar reflectivity of the rings. See, e.g., Cuzzi and Pollack 1978: http://adsabs.harvard.edu/abs/1978Icar...33..233C