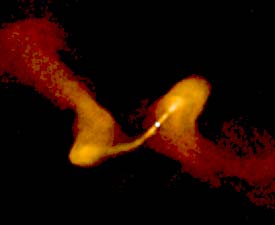 Does X mark the spot where two supermassive black holes have melded into one? A new study says that jet-spewing black holes in galaxies like 14th-magnitude NGC 362 in Pisces, shown here, will abruptly tilt when impinged upon by a second black hole. These two kinked lobes of plasma attest (albeit indirectly) to one such event. This false-color Very Large Array radio image spans roughly 4 arcminutes.

It's hardly news that many galaxies — perhaps most — harbor supermassive black holes in their cores (our own Milky Way provides one example). Nor is it news that two galaxies in a tight pair can merge (remember the Antennae?). Taken together, these two facts imply that supermassive black holes will be paired up from time to time, with one eventually orbiting the other at a distance of a few light-years.

But it is still an open question whether two black holes that orbit one another light-years apart can pull closer and closer until they eventually merge. After all, the Einsteinian scenario — with the two spiraling ever more tightly into one another while gravitational
radiation carries orbital energy away — doesn't come into play until the bodies are hundreds of times closer together. Nevertheless, says Rutgers University theorist David Merritt, "astronomers have assumed nature would find a way" to bring black-hole pairs together. And thanks to a chance conversation by radio astronomer Ron Ekers (Australia Telescope National Facility), he's found "smoking-gun evidence that nature does 'find a way' to bridge the gap."

Ekers and various colleagues have used radio telescopes like the Very Large Array in New Mexico to trace gigantic lobes of plasma hundreds of thousands of light-years from certain energetic galaxies. In 11 cases they have found "X-type" morphologies, with two sharply kinked streams of gas flowing in opposite directions. Merritt and Ekers suggest that these "X-type" radio galaxies have hosted recent black-hole mergers. Their reasoning: the rotation axis of the black hole generating the two gas streams abruptly tilts when another black hole crashes into it.

Detailed in the August 1st issue of Sciencexpress, the esoteric finding has ramifications for upcoming space missions. The proposed Laser Interferometer Space Antenna, or LISA, is being promoted in large part to "feel" for gravitational waves from merging supermassive black holes. If Merritt and Ekers are correct, LISA should be in a position to witness roughly one supermassive black-hole merger event yearly — and possibly to perform a novel test of Einstein's century-old general theory of relativity, which describes gravity and mass as ripples in the fabric of spacetime. "The paper is certainly encouraging," says LISA proponent Peter L. Bender (University of Colorado), who adds, "This is the first evidence I've seen so far that massive black holes actually do coalesce after two galaxies merge."