A new technique charts the stormy weather of a brown dwarf 35 light-years away, allowing astronomers to probe deep into the atmosphere as well as across the cloud tops. 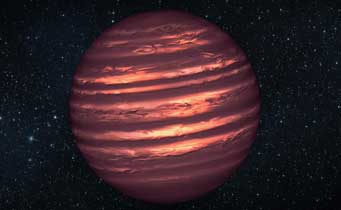 Astronomers are itching to start studying the hundreds of planets Kepler has discovered, but finding planets is a lot easier than getting to know them. Now Dániel Apai and Esther Buenzli (University of Arizona) and their colleagues are pioneering a new technique called rotational phase mapping that could one day lead to 3D images of alien planets' atmospheres.

There’s a catch: the team needs direct images of the planet to use the technique. Astronomers often compare imaging exoplanets to detecting a firefly near a searchlight: current telescopes only have a chance at seeing the brightest fireflies — super-Jupiters. (This might change soon. NASA is currently putting together a team of exoplanet experts to develop direct-imaging mission concepts.) 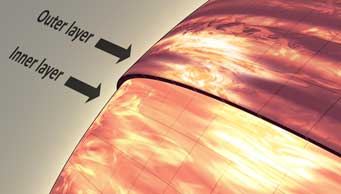 This artist's illustration shows the surprising offset layers detected in the brown dwarf's atmosphere. For example, the large, bright patch in the outer layer (just right of the arrow) has shifted to the right in the inner layer, appearing in the lower right of the image.

The brown dwarf rotates every 1.4 hour. It brightens every 1.4 hour, too, suggesting there’s a bright spot on one side. But to Apai’s surprise, Hubble detected the bright spot as much as a half-hour earlier than Spitzer did. The two telescopes used five different wavelengths to peer through various layers of the faraway atmosphere — shorter wavelengths probe the upper layers, while longer infrared wavelengths penetrate the water and methane vapor to deeper layers. The resulting three-dimensional map of the atmosphere reveals that the bright spot is probably a massive storm with complex structure, shifting to different latitudes at deeper layers.

The brown dwarf’s atmosphere is quite hot compared to Jupiter, roughly 1200° F (620° C) at the cloud tops, so the storm clouds are probably more exotic than the water clouds of Earth or the ammonia clouds of Jupiter. Although the observations can’t distinguish between various cloud compositions, one intriguing model fits the data reasonably well: an iron thundercloud, denser at the lower levels and wispier nearer the surface, that releases liquid iron raindrops. 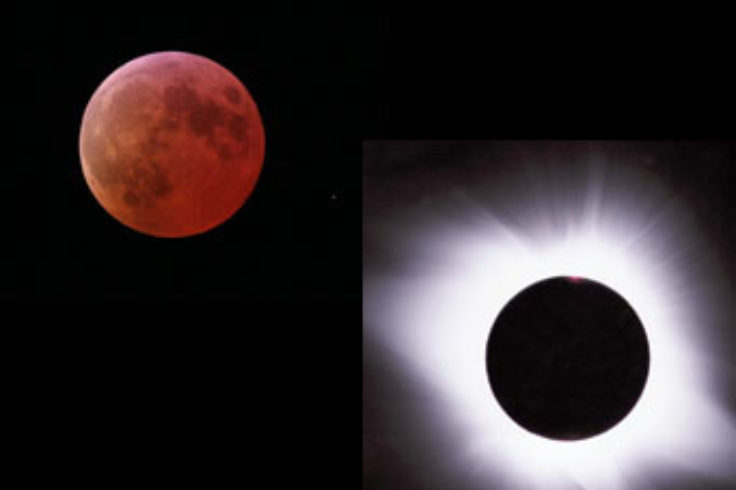 What Happened to Mars?