In their study of the solar system, my students learn that Earth is the only terrestrial planet that's still undeniably churning with geologic activity. Sure, there have been hints of occasionally stirrings elsewhere — a Martian landslide caught in the act, or changes in the Venusian atmosphere that might signal a volcanic eruption. But there's really nothing that geologists can point to and say, "Hey, that's new!"

Their thinking goes that Mercury, Mars, and the Moon were once quite hot and and their interiors partially molten. However, since all three are much smaller than Earth, they all cooled off long ago. No heat source, no geologic activity. (The jury is still out on Venus, whose clouds hide its surface from view.)

But the Moon and Mars might not be completely dead, according to what's turned up recently in super-high-resolution detailed closeups from orbiting spacecraft.

A graben forms when crust is stretched and pulled apart. This stretching causes the material to break along two parallel normal faults; the terrain in between drops down, forming a valley.

On the Moon, the evidence is a series of tiny narrow valleys, the largest of which are just a few miles long, found in high-resolution images from the Lunar Reconnaissance Orbiter Camera (LROC). Called graben, these features form when the Moon's crust stretches, breaks, and drops down along two bounding faults. Much larger stretch marks surround some lunar maria, but those formed more than 3½ billion years ago when the upper crust sagged slightly under the weight of the maria's massive lava plains.

The graben systems found by Thomas Watters (Smithsonian Institution) and others are different. In the March issue of Nature Geoscience, the team details how these features are scattered widely across the lunar landscape. It looks as though the Moon's outer crust has expanded slightly here and there — even though overall the Moon should have shrunk slightly as its interior cooled and solidified. 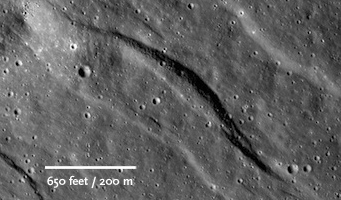 Moreover, the graben appear very fresh, with crisp edges that haven't been disturbed by cratering. Best guess is that they're less than 50 million years old — and they could be much, much younger. Maybe the Moon hasn't completely solidified after all — a notion buoyed by a recent reanalysis of 40-year-old Apollo seismic data.

"It's exciting when you discover something totally unexpected," notes Mark Robinson, who heads the LROC effort, in a NASA press release.

Meanwhile, images from the HiRISE camera aboard the Mars Reconnaissance Orbiter have likewise surprising geologists. This time the target was Cerberus Fossae, a set of fractures that cuts across a fresh lava flow on Mars ("fresh" meaning a few million years old). 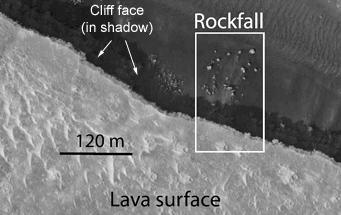 A closeup of Cerberus Fossae on Mars, showing a field of boulders that fell from a nearby scarp — most likely during a local marsquake. The boulders' paths suggest that they fell from a point on the cliff a few tens of meters high.

HiRISE has spotted clusters of big boulders along the base of several scarps in the fracture zone, which must have toppled down the steep slopes very recently. Rockfalls like these happen all the time on our planet, particularly after earthquakes. But they can also be triggered by the seasonal accumulation and retreat of snowpacks.

Fortunately, HiRISE can pick out surface details no bigger than 1 foot (30 cm) across, and that allowed Gerald Roberts (University of London) and others to carefully analyze the boulders' sizes and distributions. As they report in February 23rd's Journal of Geophysical Research — Planets, the boulders couldn't have been encased in ice and popped loose as the ice melted. Instead, all the evidence points to localized shaking of the ground — marsquakes — as the cause. And because some of the boulders left still-visible trails as they rolled and bounced down slope, those quakes must have happened recently.

Interestingly, the team hasn't found more boulder cascades elsewhere on Mars, so the situation in Cerberus Fossae could be unique. It's located near a huge volcano, Elysium Mons, and maybe the ground is shifting due to churning in pockets of subsurface magma. So geologists are keeping a close eye on this region in the hope of catching an eruption in the act.

After the volcano on Iceland that gave birth to the Surtsey island in 1963 it is my understanding that within a few years, as reckoned by the traditional geological standards, the birth of the island took place some 5 to 6 million years ago...

I wouldn't be the least surprised if the recent events ("a few million years ago") on Mars and the Moon as referenced in the article above, will, in the end, be shown to have occurred within the very last few decades or less.

Here is a link to a few diagrams in the above referenced publications of Barry Setterfield: http://tinyurl.com/7x79skr

Please enjoy! And may the Sabbath peace of the Creator of the Universe rest upon each our families and homes this Seventh Day of the week...

I have a DB growing in size tracking 25 objects or groups in the solar system from asteroids to Triton. The ages conflict with the 4.56E+9 years old solar system, fixed by Clair Patterson in the 1950s using meteorite radiometric dating. Reports like this just add to my DB and groups.