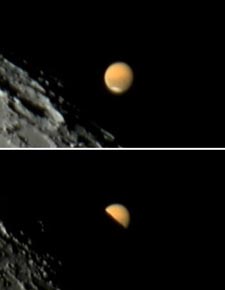 Mars slipped dramatically behind the waning gibbous Moon on the morning of July 17th. The red planet, looking gibbous itself, was then 20 arcseconds across. Andrew Chaikin captured these views near Brighton, Florida, using a Celestron NexStar 11GPS telescope and ToUCam video camera. He combined about 20 video frames taken at 8:28 (top) and 8:34 Universal Time to yield each final image.

Skywatchers got an early dose of "Mars Mania" this morning when the red planet made a dramatic pairing with the waning gibbous Moon in the predawn sky. Thanks to generally clear skies across much of the Eastern Seaboard, early risers found Mars perched just off the Moon's northern limb. The planet shone so brightly (–1.9 magnitude) that it was easy to spot despite its proximity to the nearly full Moon. Viewed through a telescope, Mars mimicked the Moon's gibbous phase and displayed a brilliant white cap at its south pole.

Observers in southern Florida were poised for an even bigger celestial treat, as the planet briefly slipped behind the lunar disk for several minutes around 4:30 a.m. local time. The track for this occultation covered a broad swath that included all of the Caribbean and Central America, as well as northernmost South America. Unfortunately, bad weather scuttled viewing plans for those on Florida's southern tip, but observers within the graze zone a little farther north enjoyed clear skies and a spectacular merging of the two worlds.

According to Mitsuru Soma (National Astronomical Observatory, Japan), the circumstances of this morning's event were very similar to one seen from Japan on November 3, 681. On that date the occultation's northern limit passed very near the ancient capital of Asuka, where observers reported that a coverup had occurred. But depending on the exact time of the event, which is somewhat uncertain, they may have witnessed a very close miss instead. How close can Mars come to the Moon and still be seen distinctly? David Dunham, who heads the International Occultation Timing Association, wants to find out. He'd like to receive reports from those who watched July 17th's event with the unaided eye from locations within about 150 km of the path's northern limit.

Lunar occultations of Mars occur roughly twice each year but frequently are spoiled by daylight or poor path placement. For example, the next two events, on September 9th and October 6th, will be observable only from northeast Siberia and Antarctica, respectively. The next favorable opportunity for North Americans won't be until February 18, 2020, when a thin lunar crescent will overtake the red planet before dawn.