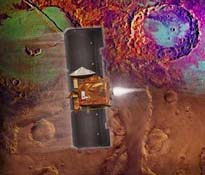 An artist's depiction of the 2001 Mars Odyssey spacecraft firing its engine upon reaching Mars. The brightly colored landscape at upper right represents the surface-composition mapping that will be a major mission objective.

After cruising across 460 million kilometers of interplanetary
space over 6½ months, NASA's 2001 Mars
Odyssey spacecraft reached the red planet yesterday. The spacecraft
was "captured" into a looping 18.7-hour orbit after being slowed by
a 20-minute-long rocket firing beginning at 7:23 p.m. Pacific time (2:23
Universal Time on October 24th). Most of the burn occurred with the
spacecraft behind Mars and out of communication with Earth, and once
radio contact was reestablished, anxious engineers determined that the
complicated maneuver was executed flawlessly. "Hundreds and hundreds
of things had to go right," noted project manager Matt Landano, "and
they did." In fact, analysis shows that the spacecraft hit its target,
300 km above the Martian surface, to within 1 km.

The success of this all-important orbit maneuver is helping
ease painful memories of NASA's two previous Mars missions, each of
which failed just as it reached the planet. On September 23, 1999, the
Mars Climate Orbiter entered the planet's atmosphere too low upon arrival
— due to an infamous mixup involving metric-English conversions
— and likely burned up. Ten weeks later, on December 3rd, Mars
Polar Lander and its hitchhiking payload of two Deep Space 2 probes
disappeared without a trace as they descended to the surface and presumably
crashed.

Thus, Mars Odyssey represents a chance at redemption for
NASA and its outgoing administrator, Daniel Goldin. In the weeks ahead,
the spacecraft will pass through the planet's thin upper atmosphere
some 380 times, using air friction to gradually bleed off velocity and
altitude. By February the craft should be in its final, circular orbit,
traveling pole to pole at an altitude of 400 km. Then its scientific
survey work will begin. Mars Odyssey carries an infrared imaging system,
called THEMIS, that will use infrared spectroscopy to determine the
composition of mineral deposits on the surface. THEMIS is designed to
work in concert with the spacecraft's gamma-ray spectrometer, which
should map the abundance of hydrogen just below ground level (hydrogen
is a proxy for the presence of water). A third experiment, for studying
the planet's radiation environment, failed
to respond to commands from Earth in August and has been shut down.