Sometimes I love being wrong. Last month I wrote a blog entry titled, "The End of the Rovers?" In it I spoke of the global dust storm that had encompassed Mars. The sunlight-starved Mars Exploration Rovers seemed destined to die a slow, cold, dark death. 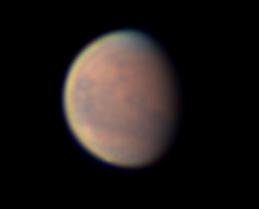 The skies are clearing above Opportunity's location, presenting amateurs with a gradually increasing contrast of albedo features. As seen in this view of Mars, Sinus Meridiani is prominent at center; the North Polar Hood is visible for first time since the July storms, and the South Polar Cap is visible as the small bump at bottom left. This image was shot before dawn on August 28th.

It seems I spoke too soon.

Six weeks after NASA engineers told Spirit and Opportunity to hunker down, both rovers are rolling again. What's more, Opportunity has resumed daily communications with Earth. For the last month scientists have only heard from the Martian sentinel every three or four days so that Opportunity could conserve its scant power supply. Without enough electricity to heat critical components, the rover would literally freeze to death.

Opportunity drove some 13 meters (44 feet) closer to the rim of Victoria Crater so it would be better positioned to soak up the Sun's rays. A favorable wind helped the rover's cause as well, boosting electrical output by 10% by blowing dust off the solar panels.

Spirit is up and running as well and is positioning itself to make more observations of the Home Plate region of Gusev Crater's Columbia Hills.

A lingering concern for the mission is the settling dust. As the particles that blocked sunlight fall back to the ground, scientists are worried that it might coat everything and lead to decreased energy in the long run. Stay tuned to see how that drama unfolds.