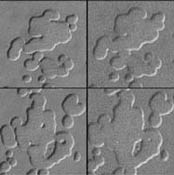 These eroded pits in Mars's south polar cap widened noticeably from October 1999 (left) to August 2001 (right). Their walls, several meters high, retreated by about 3 meters during one Martian year. Such rapid change indicates that the material here is frozen carbon dioxide — dry ice — rather than less volatile frozen water.

Images from the Mars
Global Surveyor orbiter (MGS) suggest that the Martian polar caps
— and perhaps Mars's entire atmosphere and climate — may
be surprisingly unstable on a time scale of just centuries or millenniums.

Astronomers analyzing images of the south polar region
have found ice scarps and cliffs retreating surprisingly fast. The
speed of their shrinkage, given known temperatures and amounts of
sunlight, confirms that the material in the region is dense frozen
carbon dioxide (CO2), because water ice could not sublimate
(evaporate directly from solid to gas) nearly as fast.

Moreover, the observations confirm something astronomers
have suspected since 1966: the south cap contains so much frozen CO2
that it serves as a reservoir regulating the pressure of Mars's entire
atmosphere year round. "The fact that we see the reservoir means that
not all the carbon dioxide that can be in the atmosphere is in the
atmosphere today," says Michael C. Malin (Malin Space Science Systems).
"This means that the climate is really dynamic and changing with time."
He and two colleagues publish their work in tomorrow's issue of Science.

Malin and his colleagues found that a quarter to half
of the escarpments in the south cap retreated between 1 to 3 meters
during a Martian year. The eroding areas failed to recover during
the winter, a sign of year-to-year climate variability or possibly
longer-term climate change. In fact, if the sublimation of the south
polar cap were to continue at the same annual rate, the whole cap
would be gone in a few thousand years. And the Martian atmosphere
would become much denser. Such instability suggests that even small
changes in temperatures or seasonal patterns, such as would be caused
by changes in Mars's obliquity (the tilt of its axis), may be enough
to set off major, runaway climate changes.

Meanwhile, another group publishing in tomorrow's Science
has tracked the seasonal cycles of ice formation and loss all across
the Martian high latitudes. David E. Smith and Gregory A. Neumann
(NASA/Goddard Space Flight Center) and Maria T. Zuber (MIT) analyzed
more than 400 million extremely precise elevation measurements made
by the Mars Orbiter Laser Altimeter (MOLA) aboard MGS. In the polar
regions, they found the height of the Martian surface to be changing
by 1.5 to 2 meters from winter to summer, the result of carbon dioxide
freezing onto the ground and then sublimating away. Local variations
may have been caused by winter storms, windblown drifting, and unseasonal
warming caused by dust storms elsewhere on the planet.

The team also used orbital tracking data from MGS to
map the planet's gravitational field in extremely fine detail —
so fine that they could estimate the density of the seasonally deposited
layer, which adds less than one part in a million to the planet's
radius. The average density of the winter-deposited carbon dioxide
turned out to be about 0.9 gram per cubic centimeter. This is much
denser than Earthly snow and suggests compacted slabs of dry ice.